Envisioning Athens Is Yet Another Plan—Will This One Be Different? 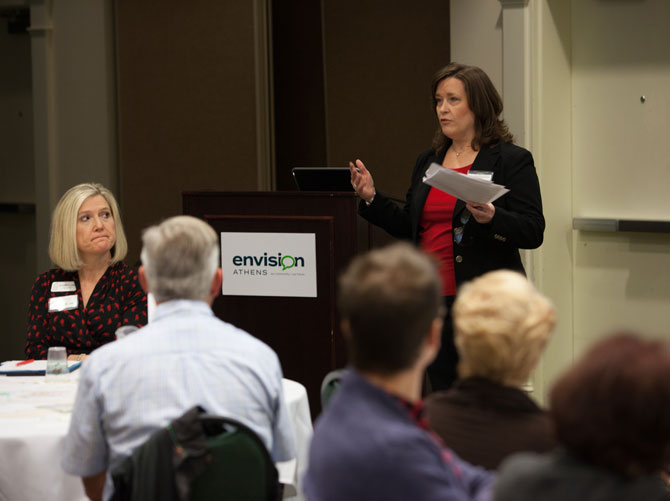 In a series of workshops, Athens is once again considering how it wants its future to unfold, a process that seems to occur once every few years. But this time, officials say, things are different, because a consulting firm, Columbus, OH-based planning NEXT, and not the local government, is in charge.

Last week, 550 people attended five Envision Athens public-input sessions at the Classic Center, the Lyndon House Arts Center and Clarke Central and Cedar Shoals high schools. They sat at tables with facilitators who asked questions about priorities for the community, and then collected three-by-five cards with participants’ answers. All of this information will undergo “strategic and technical analysis” before two more community workshop sessions in the spring and summer. The next session, a “community summit” to present some draft ideas for the 20-year plan, is scheduled for Apr. 20.

Myung Cogan, who manages business development at Athens First Bank and Trust, attended the Jan. 31 meeting at the Lyndon House. She said the people at her table brought up topics such as poverty in Athens, food deserts and education, as well as environmental concerns about the county landfill. “I think Envision Athens is a good investment of time and resources,” said Cogan, who’s on the board of the Northeast Georgia Food Bank. “I like the process, and I like the consultants. I believe something valuable will come from this.”

Jamie Greene, principal of planning NEXT, said lots of work preceded last week’s meetings. People were nominated for the steering committee several months ago, and last fall that list was winnowed to 38 names. The steering committee then appointed dozens of people to stakeholder groups and focus groups covering about 20 areas, like housing and the music industry.

The steering committee is a group that’s demographically and geographically diverse, and includes members from the Clarke County School District, UGA, corporations, businesses and nonprofits. ACC Senior Planner Bruce Lonnee said the goal was “to get fresh faces involved, not to have the same involved people serving again.” Those residents were then briefed about the process and their responsibilities and encouraged to bring their friends, neighbors and colleagues to workshops.

“It’s exciting, the outreach to people who don’t look like me, who don’t live where I do,” said steering committee co-chairman Bob Googe, adding that the process has forced him out of his “bubble.” Planning NEXT is making a concerted effort to reach out to underrepresented communities, he said. “If there’s a cultural or geographic group we’re missing, we’re going to go to them and find out what they think should be happening.”

Some have raised concerns that powerful institutions like UGA and local hospitals have too much sway over the process. Michael Songster, a local builder, voiced that opinion in a Dec. 14 Flagpole column. After attending the Feb. 2 session, Songster said he was encouraged, but is still taking a wait-and-see attitude. “I am never skeptical of this—people sitting down around a table and talking,” he said. “The question is, what happens from here?”

Googe—a Presbyterian minister and owner of the Jittery Joe’s coffee-shop chain—told participants the Envision Athens process is “an opportunity to share what you want Athens’ future to look like.” He encouraged people to reject cynicism and embrace involvement and hope.

Physical therapist Christy Norton is the mother of a special-needs child. She attended an Envision Athens workshop, where she said she brought up numerous changes she wants, including true inclusion for Special Education students in all public schools, daycare options for children with disabilities, better accessibility for the disabled in Athens and better services and options for the special-needs population as they age out of public school.

Greene says the process will create “the community’s plan, as opposed to the government’s plan.” The goal of the process is to create “an actionable agenda to move the community forward based on priorities involving projects, policies and programs.” At the end of February and the beginning of March, staff members from the Carl Vinson Institute of Government will facilitate meetings with “community stakeholders,” according to Athens-Clarke County Manager Blaine Williams. In the coming months, there will be further workshops to identify issues and plans and to determine ways for implementing them.

One issue that has surfaced on social media involves geography. At the workshops, participants were asked to mark where they live and where they work. Several people said they live outside of Athens but work in Athens. Should those who don’t live in Athens—or pay property taxes on a primary residence in Clarke County—have any say in how the community develops?

Then there is the question of whether leaders have the political will and the funding to implement the Envision Athens plan. Similar plans, though smaller in scale—studies of Prince Avenue, Oconee Street, Lexington Road and Atlanta Highway, and the downtown master plan, for example—have mostly gathered dust.

Envision Athens has a $244,000 price tag, with $175,000 coming from the local government and $15,000 each from the Athens Housing Authority and the Clarke County School District. The University of Georgia is contributing $12,500, with Georgia Power, Piedmont Athens Regional and St. Mary’s hospitals each giving $7,500. The Athens Area Chamber of Commerce, the City of Winterville, Athens Tech and the United Way are also contributing smaller amounts.

Planning NEXT and another firm, Ninigret Partners of Providence, RI, will be paid $190,000 for their work. The Vinson Institute will be paid $25,000 for facilitation, and the remaining money will cover printing and meeting venue rental costs, a post-planning party and seed money for a review of the plan’s progress in 2018.