Athens Immigrants Prepare for the Worst Under President Trump 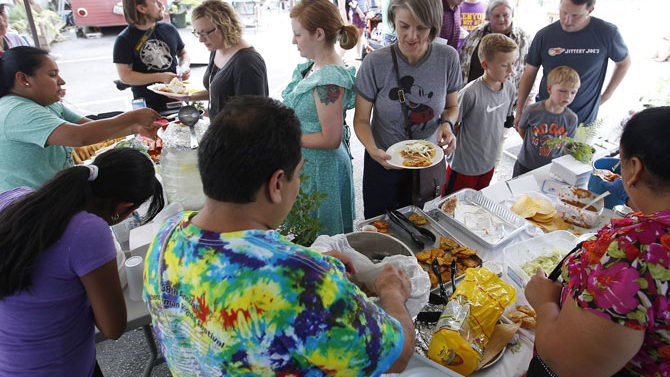 Mendoza was speaking last week to inspire more than 100 people who gathered at Oconee Street United Methodist Church to organize opposition to President-elect Donald Trump’s plan to step up deportations of undocumented immigrants. Many are fearful, though. While the Obama Administration has deported a record 2.5 million people, Trump has promised to match that number or more, as well as remove Obama’s protections for immigrants brought to the U.S. illegally as children and the undocumented parents of children who are U.S. citizens.

Athens families have already been hit hard. Immigration and Customs Enforcement raided local immigrant communities in spring 2015, deporting dozens of people and splitting up families. “They were mostly the main breadwinners in the homes, so the families were left with nothing or very little,” immigrants’ rights activist Betina Kaplan said. “Unfortunately, we expect to have more people who need resources… in the coming months.”

This time, it could be children who are affected most directly, if Trump follows through on his promise to rescind the executive orders that created the Deferred Action for Childhood Arrivals and Deferred Action for Parents of Americans programs in his first 100 days in office. Children who were born in the U.S. could lose their parents, and those born outside the U.S. but who grew up here could lose their ability to drive and work—if they’re lucky enough to avoid deportation.

After Trump’s victory, Ian Altman, an English teacher at Clarke Central who tutors immigrant students, encouraged students to express their thoughts and opinions about the election, breaking away from the set curriculum to go over Langston Hughes’ poem “Let America Be America Again.”

Outside of the classroom, some foreign-born students shared fears that they would be deported, even if they have valid documentation. Some African-American students reacted with hyperbole about the symbolism of the vote. “The first two comments I heard from students Wednesday morning [after the election] were comments that they were slaves again,” Altman said.

Overall, students of color said they worried about their safety, but most weren’t sad, Altman said. “My students are used to arguing about political issues in the abstract, but in this case, they don’t have the luxury to be sad about the results of an election. They have to be practical,” he said.

For thousands of Athens residents, the practical reality of the election could be the end of DACA, which allows young people who were brought to the U.S. before age 16 the ability to get driver’s licenses and hold jobs. For many families, those teens connect their families to the legal system—50 percent of Latino households in Athens are mixed, meaning not everyone has the same citizenship or immigration status, and 88 percent have at least one person with DACA, according to a survey by the UGA Latin American Caribbean Studies Institute. With younger siblings who are American citizens and parents who are undocumented, DACA teens have some legal status and protection to plan for their own futures and help their families with part-time income.

“They are very concerned—concerned about being separated as a family, but even before that, concerned that they won’t be able to help their families in the future,” said Kaplan, a Spanish professor at UGA who also works with immigrant teens. “A driver’s license is a very small privilege, but one they enjoyed.”

Kaplan and Altman both volunteer with U-Lead, a group of under-documented students and tutors who meet once a week to study, prepare for entrance exams, look for scholarship opportunities and complete applications. Fueled by the state ban on undocumented students attending UGA, the group has grown over the past few years to include dozens of current high-schoolers and several students currently enrolled in colleges around the country.

While the U-Lead students all have college aspirations, some worry that people they don’t know or don’t know well view them as a threat. “It’s not just about changes in policies, but how their neighbors are seeing them. My fear is how the population is going to react, and that people will see our wonderful children as criminals.”

Noe Mendoza pushed back against the Trump-fueled stereotypes that undocumented immigrants are rapists or drug dealers and don’t pay taxes, noting that undocumented workers usually pay into the system but don’t get refunds or the benefits citizens receive. “Of course we pay taxes, and we pay high taxes,” he said.

U-Lead was among several groups represented at the Oconee Street UMC meeting, along with the Athens Immigrant Rights Coalition, Community Support for Families in Crisis and Dignidad Immigrante de Athens. They started the process of organizing fundraisers, rallies, human rights workshops and driver’s-ed classes so those covered by DACA can get licenses before it’s repealed. They also plan to form a “rapid response team” to respond to checkpoints and raids, open channels of communication with local law enforcement, recruit lawyers to help with immigrants’ legal issues and create “sanctuaries” like churches and schools where ICE traditionally won’t go.

Nationalists like Trump “will work to remove any constitutional protections the state could provide,” Umberto Mendoza told the mostly white gathering. “The only protection we have is your solidarity.”