After a Rough Year, Cedar Shoals High School Tries to Turn the Page 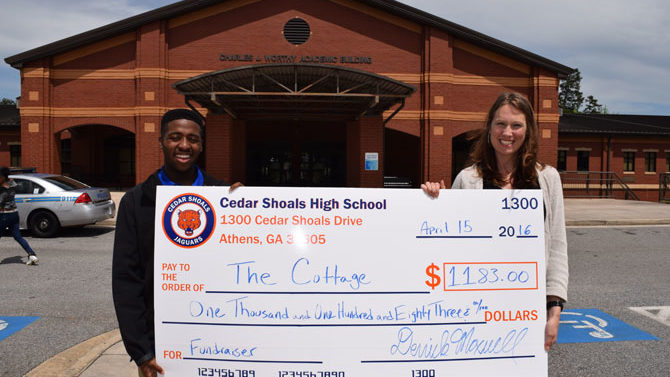 The 2015-2016 school year at Cedar Shoals High School could be considered a damaging one, to say the least. From a heavily publicized sexual assault on campus to the administrative changes that followed, many people viewed the high school through a negative lense.

His sentiments are shared by other teachers.

“I felt angry, because the events really misrepresented our school as a whole, and as a teacher I felt like we were isolated,” says Caroline Manrique-Smith, a French teacher at Cedar Shoals for six years.

Many of the Cedar Shoals students also felt these events misrepresented their school.

“I understand that it was necessary for [articles] to be published and for people to be aware that it happened, but I just think it’s really unfair that that’s all people focus on when they think about Cedar,” senior Fabrienne Mack says. “A lot a great things… happen here but it’s like only the bad things get published.”

Despite the negative repercussions of these terrible events, many teachers, students and community members are noticing, responding to, and creating changes that they feel have been necessary for a very long time.

“I feel like the publicity was necessary [because] things have been swept under the rug for a long time,” says Brent Andrews, a teacher at Cedar Shoals for 16 years. “We’ve had policies in place, or a lack of policies, that allowed students to feel like they aren’t accountable for their own behavior.”

To address the concerns of teachers, students and citizens of Athens, plans to ramp up Cedar’s security and refine its behavioral policies were set in motion.

“We’ve changed our security protocols. We installed new cameras with better quality, added better lighting in certain parts of the building, added more security guards, created a revised patrol schedule to address some of the areas of the campus that were problematic,” assistant principal Aaron Carter says. “Our campus is 55 acres. It’s like a small college, so we shored up our communication with our chief of police and we are actually meeting with him and our security staff once a month.”

These are just a few of the structural changes and adjustments that Cedar has made in recent months. In addition to deterring unwelcomed behavior, Cedar’s administration also rewards and recognizes students that do the right things, and works to create low stress environments that are more conducive to learning.

“We now have attendance committees formed for every grade level, and their job is to monitor attendance, create interventions for students with attendance issues, and reward students who display positive attendance patterns. So attendance is a big focus because a lot of the issues we’ve encountered over the past few years stemmed from students not being in class,” says Carter.

Freshmen are another focus.

“Our freshman class, which has traditionally been the class with the most behavioral infractions, is now in the Freshman Academy, to kind of seperate them and teach them appropriate social behaviors in their transition to high school,” Carter says. “So a big part of our admin change is really taking a look at these Freshman Academy students and training them to behave like high school students, so that later in their high school careers we will not have to address and revisit expectation as often.”

Improving morale is a huge theme so far in the 2016-2017 school year, and in the wake of last year’s events, the student body and staff came together. The negativity became a conduit for the voices of students and teachers of Cedar Shoals.

Teachers at Cedars Shoals began to speak out about things that they believed could no longer go unsaid and created the Cedar Advisement Team, which continues to exchange ideas about improving the local educational community with Clarke Central High School’s Students Engagement Teams. These groups provide a platform for teachers to effectively express th9eir views to the community and collaborate with other teachers to create change.

“We started the process in January, but it really started to take full stride after all the events in February because now we felt it was more important than ever to try and reunite the school” says Bharucha, who is a member of the CAT organization at Cedar.

The group began working to come up with ideas, in cooperation with administrators, that would help better the general atmosphere at Cedar. They attended the monthly board meetings to be the voice of the teachers and communicate the concerns of teachers.

But one of CAT’s biggest accomplishments was the redefining and re-establishment of the advisement program. The new advisement program, also known as the “Crew” program, provides a space for greater student input and involvement. The program also focuses on fostering relationships between teachers and students, and keeping students on track for graduation.

The group credits new principal DeAnne Varitek with welcoming teachers and students ideas to help improve the school, and says that this new administration has created a lot of opportunities to make the improvements that they have been wanting but were not permitted to pursue.

“I feel that this administration has made efforts to do all of the things [the teachers] have talked about to engage teachers and students and be open and responsive to students and teachers needs and ideas. I feel like that’s something that honestly terrified the previous administration,” says Andrews, who helped establish CAT.

It’s not just the teachers making changes—it’s the students as well. The Cedar Shoals Student Government Association has been more active than they have in years. SGA registered over 150 students to vote in this year’s upcoming election, organized a students-versus-faculty charity basketball game that raised nearly $1,200 for The Cottage, a nonprofit for sexual assault victims, and organized a charity Powderpuff football game that helped generate over $1,300 in scholarship funds for members of U-Lead Athens, a group that helps undocumented immigrants apply for financial aid to attend college.

“The biggest thing [SGA officers] wanted to focus on this year was boosting school spirit, because students should be proud of their school,” SGA President Atiya Middleton says. “One way we are changing the student culture is by giving students a voice through student surveys. We are also taking over Spirit Senate, which was started by Dr. [Mary] Bailey in 2014, [which is] really effective at  getting students excited for school events. Overall I feel like teachers are showing more pride about being at Cedar, and it’s rubbing off on the students. I really just feel like everyone is happier to be here.”