Your Guide to the May 24 Elections

A separate feature on the Clarke County tax commissioner’s race can be found here.

Election Day is almost here. While the Athens ballot may be a relatively short one—in many races, the sole candidate is unopposed—voters will be making their choices in several local and statewide races. And since few races include candidates from both parties, whatever decisions are made in the Tuesday, May 24 primaries, that’ll be it.

At the top of the ballots are races for U.S. Senate. Incumbent Republican Sen. Johnny Isakson faces two primary challengers, MARTA engineer Derrick Grayson and college professor Mary Kay Bacallao. However, Isakson is perhaps the popular politician in Georgia, while Grayson won 1 percent of the vote in the Senate primary two years ago, and Bacallao finished third running for state school superintendent race, so this race appears to be a foregone conclusion.

On the Democratic side, Jim Barksdale, an Atlanta businessman who made millions in finance, is the party-anointed champion. Barksdale has run an oddly quiet campaign so far for a candidate with low name recognition, but he recently released his first ad labeling himself as an outsider. His opponents are Cheryl Copeland, an AT&T executive who has criticized Barksdale as a Republican in disguise, and John Coyne, a CEO in the real estate industry and perennial candidate.

Athens’ representative on the Public Service Commission, which regulates Georgia Power, among other things, also faces a primary challenge. Challengers Kellie Austin and Michelle Miller have criticized incumbent Tim Echols for the Plant Vogtle expansion’s cost overruns. Echols has defended himself by saying the PSC is required to pass reasonable costs onto consumers. Although a Republican, Echols has been a staunch advocate for alternative energy sources such as solar. 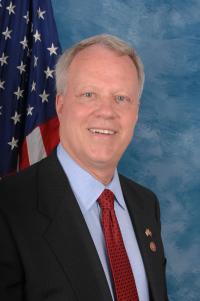 Broun left his 10th District seat in 2014 in a failed bid for Senate, and now he’s seeking to get back to Washington by moving to Habersham County and running against Rep. Doug Collins, who represents a Gainesville-centric district that includes a few Athens precincts north of the Loop.

In an election year in which many voters seem to prize outsider status above all, Broun is hurling the “establishment” epithet at Collins, who’s backed by such mainstream conservative figures as Gov. Nathan Deal, former Rep. Jack Kingston and House Speaker Paul Ryan. Meanwhile, Collins calls Broun—who’s been running for federal office since 1990 and served three-plus terms in Congress—a “career politician.”

Collins has also made hay out of accusations against Broun of ethical lapses. Earlier this year, Broun’s former chief of staff was indicted by a federal grand jury on charges related to illegally paying a consultant with taxpayer dollars to prep him for Senate debates. (Broun has denied knowing about the arrangement.) Before leaving Congress, Broun also faced an investigation into whether he personally profited from campaign funds by repaying himself with interest for a personal loan to his campaign (which he’s also denied). In addition, he spent hundreds of thousands of taxpayer dollars sending official mail to constituents in 2008, when he faced a tight re-election race. 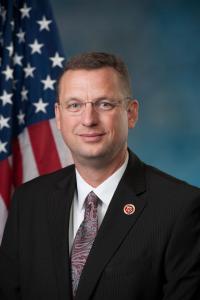 The two candidates have also sparred over abortion and Planned Parenthood. Broun has criticized Collins for voting for an omnibus spending bill that included Planned Parenthood funding; Collins has responded by saying Broun was too ineffective to get the funding removed, and the alternative to passing the bill was shutting down the government. On abortion, Collins voted for a bill banning it after 20 weeks; Broun opposed a similar bill because it included exceptions for rape and incest.

Fundraising-wise, Broun is severely outgunned by Collins, who has poured money into negative radio ads and mailers labeling Broun a carpetbagger with ethical issues. But he was in the same position in 2007, when he shocked the Georgia political scene by winning a special election after the death of Rep. Charlie Norwood.

Three other lesser-known Republicans—Mike Scupin, Bernie Fontaine and Roger Fitzpatrick—are running, too. There is no Democratic candidate in November.

In Broun’s old 10th District, which includes most of Athens, his anointed successor, Rep. Jody Hice, is running unopposed.

State Sen. Bill Cowsert (R-Athens) wants you to know he’s very conservative. Too conservative for most Athens voters—but your only alternative is someone who’s running to his right.

In seeking re-election to a sixth term representing western Clarke, Oconee and most of Walton counties, Cowsert, the third-most powerful member of the Senate, is touting his “A” rating from the NRA and endorsement by the Georgia Life Alliance. He voted for the “campus carry” bill, the “religious liberty” bill that many on the left believe would legalize discrimination against the LGBT community and a bill that provided $2 million in funding to ersatz clinics aimed at talking women out of abortions; and he told the Atlanta Journal-Constitution that he opposed the “brunch bill” to move up alcohol sales two hours on Sundays because it offends churchgoers. 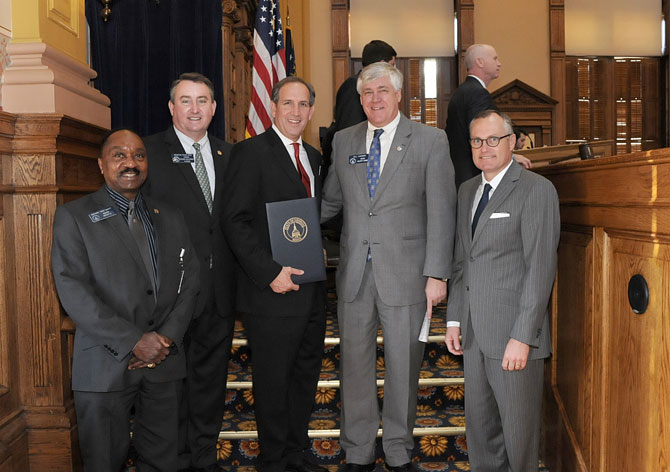 “I look at evangelical Christians—some call them the Christian right—that is very strong in our district,” he said at an Oconee County candidate forum last week. “For years now I fought for the religious freedom bill. I’ve consistently voted against the Sunday sales of alcohol and casino gambling—some of those things that are ruining our culture and ruining our values. I think I share those values with the majority of the district.”

Retired UGA administrator Patricia Daugherty said she had tried to recruit someone more conservative to run against Cowsert, but just before qualifying, she realized she should run herself. “I think what’s frustrated a lot of people is the lack of consistency,” she said of Cowsert’s record. “People say they’re conservative, but they don’t always stick to their conservative principles.” She points to the religious liberty bill, which she said failed because it was loaded down with too many amendments. 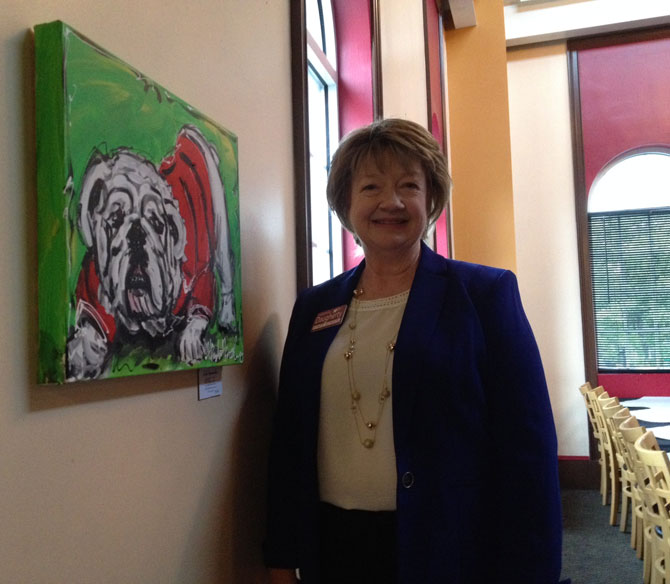 Daugherty poses after a candidate forum at Chops & Hops in Watkinsville.

On the issue of guns on campus—widely unpopular among UGA faculty, staff and students—Daugherty and Cowsert agree. “We have a fundamental right to protect ourselves, and where you see these mass shootings is in gun-free zones,” Daugherty said.

On the brunch bill, though, they part ways. Daugherty doesn’t see why someone shouldn’t enjoy a mimosa after the 9:30 a.m. service. “To me that’s very harmless,” she said.

In the district that includes the eastern part of Clarke County, Sen. Frank Ginn (R-Danielsville) is seeking a fourth two-year term. He also supported the religious liberty and campus carry bills, the two most controversial of last year’s session. His opponent in the primary is Tyler Hollifield, who appears to lack a website didn’t respond to requests for comment. Like Cowsert, Ginn is unopposed in the fall.

In spite of recent Clarke County School District controversies, only one of four BOE races is contested: in District 8, on the Eastside, where lawyer Kamau Hull faces University of Georgia geography professor John Knox. Knox touts his experience as an educator with a wealth of experience serving on various boards, while Hull is a hometown boy who graduated from Cedar Shoals High School and moved back home to get his law degree and enter practice after studying engineering at the Virginia Military Institute. Hull’s son is a Whit Davis Elementary first-grader, and Knox’s recently graduated from Cedar Shoals.

Knox has been a vocal critic of the way Superintendent Philip Lanoue handled an alleged sexual assault at Cedar Shoals in January that was not revealed for nearly a month—and even then district officials were too slow to respond to public outcry, Knox said. “The situation had inflamed,” he said. “It had festered. That’s not good leadership.”

Since he’s not privy to the board’s closed-door discussions, Hull said he doesn’t have enough information to know how he’d have voted on Lanoue’s contract extension last month. But he said he’d be more skeptical of administrators’ claims than current board members, and he questioned some of Lanoue’s policies—or lack thereof—that the board approved, such as a lax attendance policy.

In response to the Cedar Shoals incident, Hull said he supports Lanoue’s proposal to beef up security but wants to do more to address the root of discipline problems. “I think he has focused more on security, which I agree needs to happen, but I would like to see as much focus on some of the support services,” such as counselors and social workers, he said.

A recent uproar over a proposal to pave over the community garden at the vacant West Broad School is another example of district’s lack of transparency, Knox said. “Right now, there is a real lack of trust in the leadership—board and superintendent,” he said. “[Garden supporters and neighborhood residents are] going to be more likely to smell a rat.”

Hull said he supports the garden and is open to listening to those who want to save it, but he thinks that effort may have overshadowed the renovation of the school into administration offices. “We’re not talking about it being a historic African American school,” he said. “We’re talking about it being the West Broad Market Garden. That’s offensive to a certain portion of the community.”

As for issues specific to the Eastside, Hull said the community needs to come together, to become more engaged and restore “Jaguar pride.” Knox points to Gov. Nathan Deal’s Opportunity School District proposal on the November ballot. If passed, schools labeled as “failing,” possibly including Gaines Elementary, could be brought under state control. According to Knox, “chronically failing” could mean “chronically Democratic” or “chronically African American… It’s an existential threat to local school boards,” which could be replaced by private corporations, he said.

Early voting is at the Athens-Clarke County Board of Elections office at 155 E. Washington St. from 8 a.m.–5 p.m. through Friday, May 20. Election Day is Tuesday, May 24. Polls are open from 7 a.m.–7 p.m. Click here to find your polling place and review sample ballots. Voters must choose either a Democratic or Republican ballot, but both include nonpartisan races. Remember to bring a driver’s license or other government-issued photo ID.