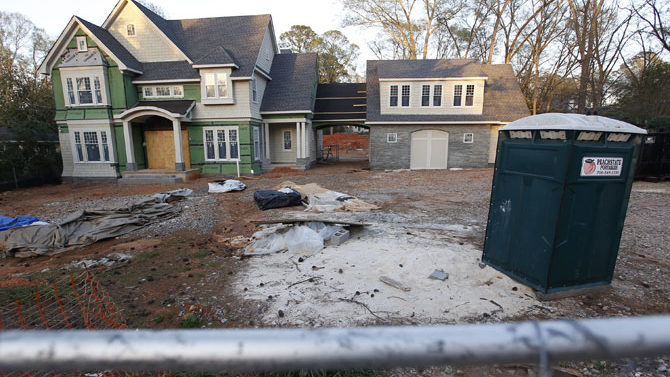 You hardly notice it, the house you’ve passed hundreds of times, until one day it’s gone. Soon bulldozers plow up everything and backhoes dig a hole that could house a community fallout shelter. Framers finish one story, then two. The roof goes up. Sod and boxwoods the size of bunnies complete a lovely new house.

The tear-down-build-up trend in Athens’s intown neighborhoods has been going on here and there for at least a decade—longtime Five Points residents remember the Callaway “Villas at Five Points” project at Lumpkin Street and Carlton Terrace—but the trend has intensified in the past two years. To some, it indicates how desirable Athens is and that people with means want to enjoy the amenities of living close to town. To others, it demonstrates a disregard for longtime residents, whose property assessments rise regularly, and exacerbates the problem of a lack of affordable housing in town.

Some questions being debated on listservs and in neighborhood groups are: Should people be able to build the houses they want in a neighborhood, even if the new houses are bigger than surrounding homes? Do longtime residents get to have a say in how their streets look? Isn’t it better to replace an eyesore with something attractive? To have houses that are owner-occupied rather than rental? Shouldn’t new housing reflect the way families live now, with multiple bathrooms and individual bedrooms?

“I think it’s a good problem to have and a sign that our town is vibrant,” says architect Katrina Evans of E+E Architecture, whose clients have included Five & Ten and Creature Comforts. “There are instances where the scale and the setback are disappointing because you want to keep the same rhythm of the street. I think there are ways to achieve a sensitivity to new construction while respecting the adjacent properties.”

Infill development was supposed to place residents close to services and businesses while reducing sprawl and protecting the Green Belt (undeveloped areas on the outskirts of town), Athens-Clarke County senior planner Bruce Lonnee acknowledges. It wasn’t supposed to be a green light to demolish houses in established neighborhoods and replace them with ones that fill their small lots the way 400-pound men fill Speedos. But all too often, that’s what’s happening. You can see these large new homes throughout older intown areas of the county.

“It seems local officials are bending over backwards to help new builders rather than be concerned with homeowner opinions and how this new construction affects them and their property values,” says UGA professor Gary Grossman, who’s lived in Five Points for more than 25 years. “Builders can still make plenty of money building ‘conforming’ houses, and if someone wants a crazy house, they can buy some acreage out of town and build it there.”â€‹

In recent weeks, the infill housing issue has been discussed at several public meetings, including one the Athens Clarke Heritage Foundation sponsored in February and another hosted by the ACC planning department a few weeks later.

“I think people should be able to build whatever as long as they are respecting the guidelines for setbacks, roof heights and the percentage of the lot covered,” says Hank Joiner, an ACC planning commissioner who has a 25-year-old business managing rental property in Clarke and Oconee counties. Micromanaging design isn’t possible, he adds.

At the first meeting, Lonnee defined infill housing and outlined the steps the local government is taking to address the issue. The second meeting featured a panel of three local builders—Tom Ellis, Michael Songster and Jared York—and an architect, Lori Bork Newcomer, who all specialize in infill housing. They proposed that infill development is more a problem of perception than an actual problem and decried the idea of imposing design standards. Every time you limit scale, said Songster, you lose the benefit of flexibility. Newcomer said that those houses worth protecting would be protected because of their intrinsic value, though she didn’t define “intrinsic value.” The point of the meeting, Lonnee said, was “to try to do things better, not to get upset about a particular address or project.”

According to records compiled by the ACC Planning Department, from 2010–2015, there were 152 properties with some infill development. Drive on MLK and Ruth Street to see some of these projects. About 30 of these infill development projects involved a demolition. In the Five Points neighborhood, a house was demolished recently on Highland Avenue—and a large home built on the lot—and another house on Highland is slated for demolition. Two houses on Milledge Terrace and two more on West Lake, one built in 1905, are also going to be flattened. [Editor’s note: Since publication, permit applications have been filed to demolish houses at 355 West Lake and 338 Springdale St., as well.]

For Five Points resident Dorothy O’Niell, every for-sale sign in her neighborhood makes her wonder if the house will be demolished and replaced by “another Tyrannosaurus Rex that hogs not just physical space, but also our emotional space, our ‘neighborhood space.’ I actually welcome further change in my neighborhood, but the enormous scale of what we are getting is excessively intrusive.”

The ACC planning staff expects to hold more public meetings about the issue in the coming weeks and to have recommendations for the Mayor and Commission by summer. Planners have drawn up measures for consideration that include:

• context-sensitive design standards to keep infill housing in character with the surrounding neighborhood.

• neighborhood conservation overlay districts that let neighborhood residents decide what features in home construction and compatibility matter to them.

“The only people all of this building makes happy are the Realtors, the builders and the city of Athens, which gets the taxes,” says John Waters, a historic preservation professor in the UGA College of Environment and Design. “What it does is destroy the character of a neighborhood to the point that the people who are sensitive to it leave. I tell you, it’s unbelievable.”

Adopted in 2000, the current zoning regulations governing height and setback have allowed the construction of new houses that dwarf their neighbors. They’ve let developers buy, bulldoze, divide lots and rebuild along Park and Yonah avenues in Normaltown. In Five Points, many of these new houses are vastly larger than their next-door neighbors. On McWhorter, for example, a ranch house seems to cower beside a massive project, still under construction, that includes a three-story house, attached garage and a swimming pool. On nearby Catawba, a small house ballooned into a four-bedroom, two-story house, complete with a huge garage and a sale price of half a million dollars. That may be small potatoes for a retired couple relocating from Chicago or California, but it’s out of the price range of most working families.

A study commissioned by the local government found that only 59 percent of those working in the county live here. Families with children are moving to surrounding counties where single-family housing is more plentiful and affordable, and there are more choices in terms of size, the study found. Only 22 percent of households in Athens Clarke County include children. The consultants found that the cost of houses in Athens is higher than the state average while incomes are lower.

“You have these intown neighborhoods that have traditionally been affordable that are suddenly out of the range of working families, and that isn’t good for anyone,” says Amy Kissane, director of the Athens Clarke Heritage Foundation. “The design standards need to change, and I think there’s a way they can change that won’t stifle people’s architectural creativity.”

Kissane is advocating for restrictions on height, setback and lot coverage for new houses that take into account the adjacent properties and the entire street. If there are two-story houses on nearby lots, then a two-story house, in whatever style the homeowner wants, would be fine. If all the existing houses are set back from the street 25 feet, then a new house should also sit 25 feet from the street. She also wants the mature trees protected, materials salvaged if there is a teardown and incentives to build affordable housing.

The tried-and-true method of assuring no out-of-scale housing is by applying for designation as an historic district. That’s what some neighbors in Five Points did when one property owner, Chandler Pike, asked for a demolition permit, wanting to replace one of her traditional Five Points cottages with a larger house. They felt her request should be denied—including the Campbell family, who share a driveway with Pike.

Homeowners talked to Commissioner Mike Hamby, a nearby resident, about what they could do to stop the teardown, and he filed for a demolition moratorium. The ACC Commission approved the moratorium. Longtime residents subsequently filed a request for much of West Rutherford Street to become an historic district, a designation residents had rejected a few years before. It would prevent any house within the district boundaries from being torn down.

Pike contends the Rutherford Street house should be demolished because there are problems in it that can’t be fixed. She says if the historic district designation is approved, she thinks she’ll either sell the house or rent it, but she herself won’t live in it because it’s bad for her health.

The Rutherford Street residents who favor a historic district were concerned about what would replace Pike’s traditional Five Points cottage. Two houses demolished on West Cloverhurst and on other streets in the neighborhood in the past few years have been replaced by much larger buildings. Rutherford residents didn’t want their homes dwarfed by incompatible new construction.

“Being allowed to build whatever you want always makes a difference,” says Five Points resident Carol Goerig, “but when you do it in a neighborhood like Five Points, the chances are good that your house is mere feet from your neighbor’s, and the effects of height and setback from property lines are greatly magnified.”

The ACHF and Friends of Five Points will host a meeting on infill development from 5:30–7:30 p.m. Monday, Apr. 4 at the ACC Library. In addition, Lonnee says there will be three days of drop-in meetings at the planning office at which people can ask questions and talk with staff members about their concerns and ideas. There will then be a work session with the planning commission, at which the public can listen, followed by another public work session and a public meeting with the community at large. The planning staff will then return to the planning commission and hold a public hearing before the recommendations go to the ACC Commission. Lonnee says the commission may want to hold further meetings with constituents.