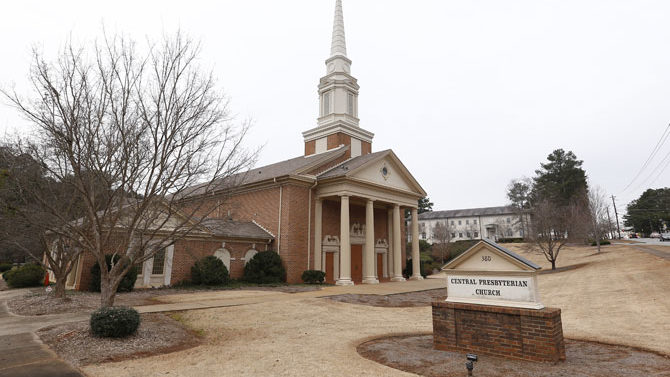 In a squabble over ordaining gays and lesbians and whether they can marry in the church, a majority of active members at Central Presbyterian want to extricate themselves from the mainline Presbyterian denomination, the Presbyterian Church (USA), and join a more conservative one. Members may leave the PCUSA, but they won’t be taking the keys to the building, according to documents from the Northeast Georgia Presbytery.

The Alps Road facilities and land are held in trust “for the use and benefit of the Presbyterian Church (USA),” according to the Northeast Georgia Presbytery, an association of 54 PCUSA churches. The property is valued at $3 million on the Clarke County tax rolls.

According to the PCUSA, “When a congregation seeks to leave the Presbyterian Church (USA), it is breaking what is often a significant historic relationship; it is also departing from a fellowship in which its officers have participated, by whose polity they have pledged to be governed and with which many members may feel bonds of affection.”

On Jan 24, a majority of the congregation voted to leave with its property and join ECO: A Covenant Order of Evangelical Presbyterians. The ballot was reworded from the one created by the presbytery, which didn’t mention property. The 106-year-old Central Presbyterian has been on Alps Road since 1960, when it moved from a building where the Dunkin’ Donuts on North Milledge Avenue is now.

Presbytery officials have said the vote doesn’t pertain to the property, which remains in trust for the PCUSA. “The Northeast Georgia Presbytery is in prayerful consideration, seeking guidance as we work through these important issues,” says Rev. Travis Adams, the stated clerk of the presbytery.

A dustup in the Presbyterian Church isn’t unusual. It has a history of splinters. Theological and social issues—slavery, the ordination of women and strict adherence to the Westminster Catechism—have roiled the church. The current sticky issue at Central is the larger church’s inclusion of gay believers as full members of Christ’s community.

“I’m a cradle Presbyterian, but Central stopped being a PCUSA church years ago,” says former member Sally Barnes. “I paid for that church, just like a long line of Presbyterians before me, and I, along with many other former members, was made to feel there wasn’t a place for me at Central.”

The PCUSA now allows gay men and women to be ordained and serve as church leaders. When it was proposed, the change didn’t sit well with some at Central, including its head minister, Rev. Bob Bohler. During a meeting of the Northeast Georgia Presbytery, he voted against ordination of gay believers and urged his fellow delegates to do the same.

But a majority of presbyteries around the country approved the proposal, and in 2011 the PCUSA let churches allow gay members to serve as elders. At Central, however, church leaders voted to keep the standard of ordination as “fidelity in the covenant of marriage between a man and a woman or chastity in singleness.”

Last year, with one word, the PCUSA sanctioned gay marriage, saying “marriage involves a unique commitment between two people, traditionally a man and a woman, to love and support each other for the rest of their lives.” The word is “traditionally.”

In the PCUSA, the “session” is a group composed of elected elders and the ministers who govern the church. Central Presbyterian’s session says the change in marriage indicated a “point of no return” for the denomination.

According to a letter sent by the session last September to Central church members, “We believe that it is the denomination that has changed. We have not left the PCUSA; it has left us. It has made a radical shift in theological direction.”

Beside the changes in polity, there have been other changes at Central since Bohler arrived in 1999. The church building has been remodeled and expanded. A contemporary service precedes the traditional Sunday service. And an associate minister, Rev. Deb Trimpe, has been hired.

Of great concern for longtime Central member Louis Boyd is that during the past few years at least 88 members, 34 of whom served as elders, have left Central. New members have joined, bringing the membership to about 300 adults and confirmed young people, as well as younger children.

“We’ve lost some real fine people, and there are still wonderful people here,” says Boyd, a retired UGA professor. “I really have felt so bad for those who had been members for 40–60 years, raised children and saw them married in Central, and they left because of what was going on in the church.”

Some members left over the issue of adult Sunday school classes. One class studied the Bible. Another read widely and discussed various topics that interested them. Another class touched on social issues, including Biblical scripture and history regarding homosexuality.

Conflict over the classes erupted. According to a Presbytery report, “the flash point for the conflict was the adult Christian Education program and the latitude some teachers had taken with curricular and theological issues.” A team from the Presbytery talked with Central ministers, congregants and Sunday school teachers over 22 months. All adult Sunday school classes were eventually dissolved. New ones were later created.

“My Sunday school class had become like a family, and we prayed for each other and helped each other when things went badly,” says former member Jeani Goodwin, who taught a class for 11 years. “It hurt. You were made to divorce people who didn’t want to be divorced.”

Central treasurer Jeff Dorfman says, “I think everyone regrets how it was handled, whether they stayed or left.”

In its September letter to the congregation, the Central session said it feels that ECO is the denomination for Central Presbyterian. ECO doesn’t sanction gay marriage, but does allow for the ordination of women. Central wanted to be released to another reformed denomination “more in line with its values.”

The Northeast Georgia Presbytery learned of Central’s wishes last fall, as it entered a time of discernment. An administrative commission from the presbytery talked with the session, the congregation and former Central members; reviewed materials; prayed; and came to the conclusion that Central Presbyterian will remain a congregation within the PCUSA, documents say.

After learning that no member of Central’s session would “desist from the work to lead the church into ECO,” the administrative commission dissolved the Central Presbyterian session on Jan. 12. The commission is currently functioning as the session and will do so until new elders are in place, according to documents on the website.

In 2014, 59 PCUSA congregations across the country were dismissed to ECO, according to the PCUSA headquarters in Louisville, KY. Since the gifting of property is left up to the individual presbyteries, headquarters doesn’t know how many congregations built new church facilities and how many continued in former PCUSA buildings as ECO congregations, says communications director Toya Richards.

On Jan. 24, “we had 82 percent of the active members vote for dismissal with property,” says Dorfman, the church treasurer. “We have the opportunity to continue asking, and we are appealing to higher authorities, the synod. We will continue to fight for the building.”