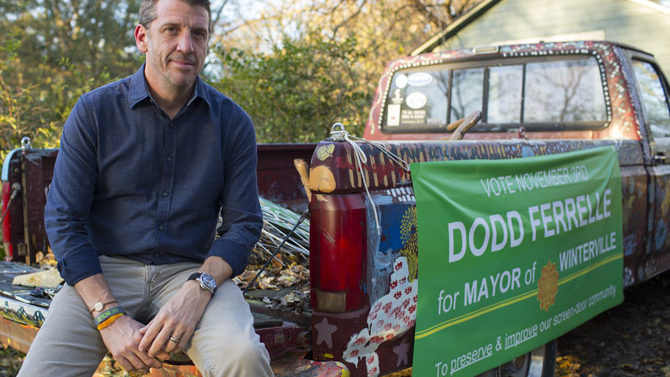 Winterville may be a small town, but Dodd Ferrelle has big plans for it.

After the newly elected mayor was sworn in Tuesday, Jan. 5, Ferrelle and about 200 supporters marched from City Hall a half-mile down the street to the former high school’s long-shuttered auditorium, where he unlocked the doors for a brief celebration before adjourning to the brand-new senior center next door for a reception.

Local artists’ work temporarily adorned the walls in the dark, dusty auditorium as Wilma Pittard sang a song about the city she wrote as a teenager, and actress Joelle Arp Dunham performed a short skit as a Southern belle who was part of the high school’s last graduating class in 1956. Ferrelle has pledged that his first priority as mayor will be to renovate and reopen the auditorium as a theater and concert hall, fitting with his vision to reshape the sleepy railroad town into a music and arts destination.

“I see this as maybe being the heart of the community,” he told the crowd. “I just want to give Wintervillans a glimpse at what’s possible for the future.”

Winterville is already changing, and Ferrelle is proof.

He came to Athens from Savannah in 1993 to pursue a career in music and became a successful singer-songwriter. Ten years ago, he and his wife, Cameron Bliss Ferrelle, expecting the first of their two children, moved into the second house ever built in Winterville, originally the home of the railroad depot supervisor the town is named after.

“Cameron and I were looking for places in Normaltown,” Ferrelle recalls while sitting in the barn he turned into a studio and decorated with his wife’s paintings. “We love that area, wanted to stay there, but the places we were looking at were getting so expensive, not a lot of yard, and knowing we had a family on the way, Cameron decided, ‘Why don’t we look outside of town a little bit?’ Well, I’d always loved Winterville. Rode out here, saw the for-sale sign on this house, and we fell in love.”

He’s not alone. A host of well-known local artists and musicians, like Jim White, Clay Leverett and Jimmy “Cap Man” Straehla, also call this town of about 1,100 near the Oglethorpe County line home. And residents say more families with young children, drawn by the Mayberry atmosphere and reasonably priced real estate, are moving in, too.

“A lot of young families recognize you can get a really nice house, maybe more affordable, good schools, and you’re right next to Athens,” says Emily Eisenman, the former mayor (who didn’t seek a second term).

All of which, Ferrelle and his supporters believe, made the time right for new leadership. “I knew we had a lot of artists living in Winterville, but I had no idea how many until I went out and started knocking on doors,” he says. “This is a huge creative town that’s been bubbling beneath the surface, and when I started my campaign they just popped up out of the woodwork, and their voices were heard.”

Although Ferrelle is best known as a musician, during the campaign he chose to emphasize his business career—he worked his way up from truck driver to executive at Cameron & Barkley, an industrial supplier—and his involvement in the city’s Marigold Festival, the local elementary school and other community organizations. “That was kind of a jaw-dropper at the forum, because my experience was a question mark for a lot of people in town,” he says.

But the skills he learned as a performer translated well to politics.

“I still get nervous playing, but I’m also comfortable in front of crowd. That helped talking to people, I think,” he says. “And the marketing aspect, for sure, was a benefit. That’s kind of key in these situations, especially running against two guys who knew everybody in town, good guys. One lives in the house he was born in, so they have strong, good relationships with everybody.

“I had to market myself to a lot of people who didn’t know me or just knew me as a musician. I had to get out in front of anything that might be negative about that. I don’t know why, but some people think being a musician is negative.”

Even his future campaign manager, Kasey O’Brien, a University of Georgia political science major, was skeptical. “The first thing I read about Dodd was ‘local musician enters mayor’s race,’” she says. “I thought, ‘Oh, gosh, this might be an uphill battle.’ Then I met him, and he had so many ideas.”

O’Brien cut her teeth volunteering for Michelle Nunn’s 2014 Senate campaign, and she ran a modern, Obama-style campaign for Ferrelle, even though the technology in most small-town political races hasn’t progressed beyond the invention of the yard sign. Rather than rely on printed literature or randomly knocking on doors, she used Democrats’ VoteBuilder database to target potential supporters and drive them to the polls.

“There’s been a little bit of a changing of the guard,” says Mike Holcomb, who worked on Ferrelle’s campaign. “There’s been a small pocket of progressives who figured out how to get people involved and get out the vote.”

Now that Ferrelle’s in office, here comes the hard part: keeping all those campaign promises.

He’ll have a solid foundation to build on. Eisenman oversaw improvements at Pittard Park—a new playground, a barbecue pit, a pickleball court and a disc-golf course—that were dedicated in December. The city also finally completed the troubled $1.4 million senior center almost two years behind schedule after firing the original contractor. Programming is expected to start in March.

The senior center, in the old high school that closed 60 years ago, sits next to the auditorium that Ferrelle plans to make the centerpiece of his tenure in office. Although state historic preservation grants are available for such projects, he hopes to do it without taxpayer funding. “I’m going to go into Athens and all over the state, and I’m going to sell those seats as a dedication, so you’ll have a plaque on the back of those nice wooden seats,” he says. Eventually, he envisions it as a music venue and home to a theater troupe, and a revenue generator for the city, which has a $600,000 annual budget.

Sidewalks are on the agenda, too. “The idea is to make the town walkable all the way from Pittard Park, down to the auditorium, to Five Points [the Cherokee Road-Athens Road-Main Street intersection] and up to the school,” Ferrelle says. “All of that is in preparation for if, or I should say when, the Firefly Trail comes through here.”

The first phase of the rails-to-trails project, between downtown and the Loop’s Lexington Road interchange, is under construction. Athens-Clarke County will eventually build it out to Winterville, and a private group hopes to extend it down to Union Point in Greene County from there.

Combined with the creative talent already in Winterville, Ferrelle envisions the trail drawing recreational cyclists and tourists to Winterville, pumping money into the economy. Winterville Station, a controversial 180-lot subdivision approved in 2005, went belly up before it was built, and the new owner is converting it into mini-farms. In Winterville’s rural setting, Ferrelle sees a farmers market setting up under the Pittard Park pavilion, and an ice cream shop, coffee shop and art galleries popping up downtown. He plans to appoint an arts/business council to put the pieces together.

Another community hub is Winterville Elementary School—or at least it could be. Relations with the community have been frosty, since the school has had problems in the past with teacher turnover and employees embezzling funds. But Lauren Holcomb started a PTO three years ago, and things are looking up. Ferrelle says he’ll use his position to apply for grants and support the school in any way possible.

“The school and the community kind of went their separate ways a little bit,” Ferrelle says. Now, “we’re on a great path. I just think it wouldn’t hurt to have the mayor walking the halls of the school for the next four years.”

Of course, as Athenians well know, cities can become victims of their own success. Will the high quality of life that’s driving a luxury-student-housing boom downtown and driving up intown home prices work against Winterville, too? After all, it’s halfway between the development happening on Highway 29 and on the Eastside.

Ferrelle doesn’t think so. The Winterville city charter contains a secret weapon: Alcohol sales are illegal inside the city limits.

“One thing that keeps that growth slow and controlled is the alcohol restriction on sales in town,” he says. “That’s a huge part of why that boom can’t happen.

“I visit liquor stores. I’m a musician. I enjoy my beverages. But I don’t mind driving four miles out of town. And it does keep your town a quaint, quiet, sleepy, screen-door community.”

Hopefully, that’ll be one less thing for Ferrelle to worry about—he has a lot on his plate already. But Eisenman thinks he’s up to the task. “He has a lot of energy,” she says. “He shares a vision I’ve always had, where he’s very community-oriented.”