We Really Did Try 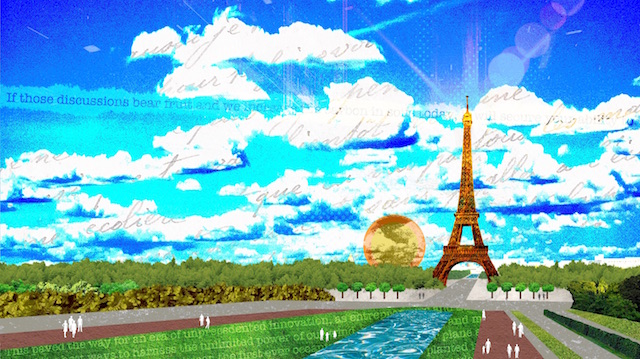 Editor’s note: World leaders from more than 190 countries have convened in Paris during the first two weeks of December for the long-awaited United Nations Climate Change Conference. Will the governments of the world finally pass a binding global treaty aimed at reducing the most dangerous impacts of global warming… or will they fail in this task?

Letters to the Future, a national project involving more than 40 alternative weeklies across the United States, set out to find activists, authors, artists, scientists and others willing to get creative and draft letters to future generations predicting the success or failure of the Paris talks—and what came after. Some participants were optimistic about what is to come; some not so much. We hereby present some of their visions of the future.

For this American, with rising seas, record droughts and raging fires already upon us, with terrible climate impacts coming even if fossil fuel use ended tomorrow, these are discouraging times.

Words of wisdom? Let’s start with an apology—to my own children and grandchildren and the billions yet unborn. I am so sorry.

Rich Rusk in his younger years.

This 69-year-old baby boomer with his Ivy League education, strong mentors and full awareness of what Al Gore, James Hanson and climate scientists have been predicting for 30 years, has no excuse. Even my own father, Dean Rusk, former secretary of state for John Kennedy and Lyndon Johnson in the 1960s, sat me down in 1994, several weeks before his death.

“Global warming will be THE issue for your generation,” he warned. “You need to get after it!”

I adored my aging father, and that should have done it. But I did like everyone else: I kicked the climate can down the road for another 12 years.

What finally got me involved? For this fly fisherman, it took trout dying in North Georgia streams and state hatcheries during the 2006–2007 droughts. They rolled up dead in low water and 85 degree stream temperatures. Something precious for me had to die before my very eyes.

We are playing catch-up now. Millions of Americans remain skeptical of the science, with climate-change denial a cottage industry. Our politics are awash with fossil fuel money, Congress is at an impasse, and the upcoming 2016 elections are uncertain.

Yet this Georgian and millions of fellow activists are working hard and doing all we can. Just a few weeks ago, I witnessed former Vice President Al Gore in Miami, splashing through downtown streets flooded by rising seas and high tides, to deliver his achingly compelling message before 1,000 activists from around the globe. Rising from the ashes of his 2000 defeat, he redefined his life and launched his Climate Reality Project crusade into high gear—a last-ditch, impassioned, all-out effort to rally the world and save our planet from irrevocable change.

“My fellow Americans, the climate crisis is not a political issue. It is a moral issue,” said Gore, lacing his message with words of hope, powerful reminders of global actions by ordinary people and America’s success in dealing with past threats.

“Political will is a renewable resource. It is time to renew it.

“When we have really important work to do,” he continued, “it can become a source of joy.

Intermixed with today’s brutal climate realities, Gore’s event was a giant pep rally. Our hearts were in our throats.

To the billions yet unborn: When you look back at this 2015 Paris Conference, Gore and the way-late efforts of your ancestors, however this turned out, there were millions of us who really did try.

Athens Power Rankings for the Week of Nov. 30