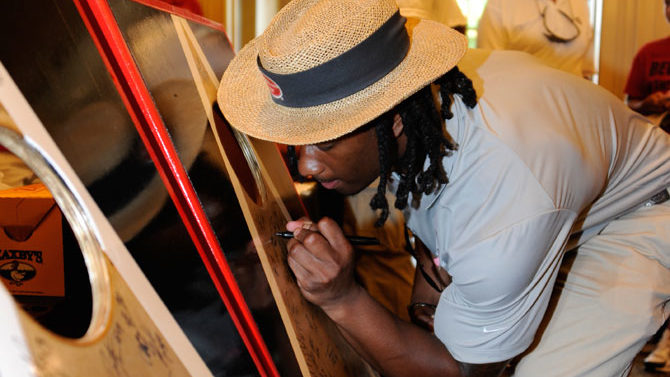 Finally, we can celebrate Independence Day the way our Founding Fathers intended: by blowing things up without ever crossing the borders of this great state.

Before July 1, only sparklers could be bought in Georgia, necessitating an hour-long trip to South Carolina in order to get our patriotic hands on the good stuff. But now, thanks to the Georgia legislature, Roman candles, aerial rockets, mortars and other explosives are legal here. Already one fireworks store has opened in Athens: Jack’s Fireworks at 3970 Atlanta Hwy. As of last week, it was one of only two that had been approved in the state, according to the Atlanta Journal-Constitution.

The law does include a couple of caveats: Don’t set off your fireworks after midnight, and stay away from gas stations and nuclear reactors. Oh, and please be careful—it’s fun and games until someone loses an eye. (In response to safety concerns, lawmakers included a 5 percent tax that will be earmarked for public safety expenses.)

The fireworks law isn’t the only one taking effect July 1. Other legislative actions range from the frivolous (naming a state mammal) to the essential (shoring up transportation funding). Here’s a look.

Road Money: The transportation funding law the legislature passed this spring will help shore up roads and bridges (though not transit) around the state. But it could have an even bigger impact in Athens than elsewhere—and not in a good way.

Lawmakers included a provision tacking a $5 surcharge on motel and hotel rooms, the logic being that it is a way to get visitors to pay for the roads they use. Supporters cited a statistic that 85 percent of people who stay in hotels come from out-of-state. That’s almost true in Atlanta and Savannah—the actual figures are slightly lower—but in Athens, Georgians make up 73 percent of overnight stays, according to the Georgia Convention and Visitors Bureau.

The organizers of at least five potential local conventions have already expressed concern about the surcharge, according to Athens CVB Executive Director Chuck Jones.

“It was an added expense they were not expecting,” he says. “$5 doesn’t sound like much, but when you multiply it by 500 rooms, it ends up being a big expense.”

Jones said he’d like to see an exemption for the student groups that frequently gather at the Classic Center. “They’re on tight budgets a lot of times, so it’s something that could make attending a convention more challenging for some,” he says.

Gas taxes will rise slightly, but electric-car buyers are in for a real shock. The law repealed a $5,000 state tax credit on electric car purchases (a $7,500 federal credit is still in place), and electric-car owners must pay a $200–$300 annual fee to make up for the gas taxes they’re not paying.

In addition, the law allows individual counties to put their own transportation referendums on the ballot, similar to the regional T-SPLOSTs that mostly failed in 2012. (A vote on raising sales taxes by 1 percentage point for transportation in Clarke County alone stands a much better chance of passing, though.)

Among the Athens projects on the original T-SPLOST list were funding for Athens Transit, widening Hawthorne Avenue and bike lanes on Prince Avenue, North Avenue and Lexington Road. But the project list for a 2016 T-SPLOST will likely be chosen by a committee, says Athens-Clarke County Commissioner Mike Hamby. “Usually the best way to get buy-in is to make sure all communities are represented at the table for selecting projects,” he says.

Craft Beer: It wasn’t exactly what breweries wanted, but a law kicks in July 1 that will allow them to send beer home with consumers who pay for a tour.

Prior to July 1, breweries could give away free samples on free tours, and they could only offset the cost by charging for souvenir pint glasses. They asked to be able to sell beer directly to consumers—arguing that it would boost their bottom line, attract more breweries to Georgia and create jobs—but the powerful wholesalers’ lobby defeated the effort.

“Breweries in Georgia will be able to get more of their product to customers onsite and packages to go, so we are extremely excited about that and what the future holds for craft breweries,” says Shannon Vinson, communications coordinator for Creature Comforts.

The final version of the law allows breweries to charge various prices for different tour packages. (This also means an end to the option for a free plastic cup to hold your samples.) Those packages can include not only samples to drink on-site, but up to 72 ounces in a growler or six-pack to take home.

At Terrapin, a tour with 36 ounces of beer to drink at the brewery will be $12; a six-pack to go will be $12; and a combination will be $22. The brewery also is adding 1 p.m. tours on Fridays and Saturdays. Creature Comforts and Southern Brewing had not announced how their prices would change at press time.

The Gurley Law: Following former University of Georgia running back Todd Gurley’s four-game suspension this past season for accepting money for autographed memorabilia, the state legislature passed a law that makes enticing student-athletes to break NCAA regulations an aggravated misdemeanor punishable with up to a year in prison.

At the time of Gurley’s suspension, fans were irritated that Gurley alone was being punished, and not the person—later discovered to be a memorabilia dealer and a fan of Georgia’s archrival Florida—who tempted Gurley to take the money.

All it takes is a look at comments made in response to any article regarding Gurley’s suspension to see the fury of the Bulldog Nation. (A representative example: “I’d love to take a big bulldog shit on him.”) Bryan Allen became the single most hated man in the state of Georgia.

State Rep. Barry Fleming (R-Augusta) proposed the appropriately numbered House Bill 3, which “prohibit[s] persons from entering into or soliciting a transaction with a student-athlete that would result in sanctions to the student-athlete.” The bill had no trouble whatsoever making it through with support from both major parties, passing in the House 145–27 and in the Senate 48–4.

“We plugged it into a law about alumni being overzealous,” Fleming, a lawyer, told the Associated Press. “Now it’s a misdemeanor of a high and aggravated nature. It can be up to a year in jail and a $5,000 fine. On the civil side, the university can sue the person who does this for any damages sustained, like losing a TV contract, not going to bowl games.”

More Laws: Trapping raccoons is now legal in Athens and points north, in addition to South Georgia. The white-tailed deer won an epic battle with the gray fox to be named Georgia’s official mammal. Uber drivers are now required to undergo background checks under a law that also limits local governments’ ability to regulate taxis. High school students can attend college full-time during their junior and senior years under the Move When Ready program. High-school students who don’t pass the graduation exam can still get their diploma if they meet all other requirements. Homeowners can get financing to install rooftop solar panels to generate power for personal use.