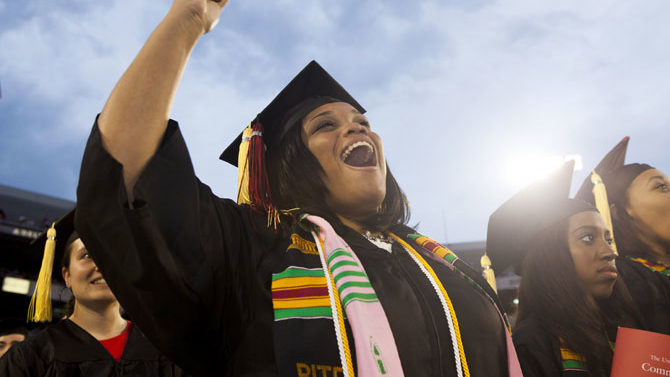 Thousands of newly minted University of Georgia graduates will flood the job market after crossing a Sanford Stadium stage this Friday to receive their degrees. Luckily for them, the job market is stronger than it has been in almost a decade.

“My expectations for jobs out there are very strong,” says economist Jeffrey Humphreys, the director of the Selig Center for Economic Growth at UGA. “Timing is everything when it comes to landing a job, and the timing is perfect for this year’s graduating class.”

Georgia’s rate of job growth is projected at 2.5 percent, and in the U.S. as a whole, Humphreys says, we can expect a 1.9 percent employment growth for 2015. More recent UGA graduates are expected to land jobs this year than any time since the Great Recession started in 2007. “Things are looking good,” says Scott Williams, executive director of the UGA Career Center. “The job market is better, and hiring is up.”

Career counselors say they expect hiring to continue to trend up when 2015 job figures for this year’s class are released next year. In 2010, 52 percent of the graduating class found employment, a number that rose to 63 percent last year, with another 15 percent enrolling in graduate school. About 4 percent accepted internships after graduating. A recent UGA job fair hosted a record 250 employers, with 2,000 students attending.

Humphreys says the job growth is not limited to a few industries, either; there’s growth across the board.

“Almost every industry is benefiting, and so what that means is that, although some majors are always going to be in more demand or less demand, now is a pretty good time to be looking for a job regardless of your major,” he says.

Many different factors have contributed to the upturn in hiring, Humphreys says. “One of which is having recovery,” he says. “Second of which is sort of the renewal of manufacturing in the U.S. The third of which is Georgia has done very well in terms of attracting new businesses and industries. We’ve been very competitive with other states in terms of bringing companies to Georgia, and that’s making a big difference, particularly in the metro Atlanta area.”

Flagpole asked a sampling of graduating seniors what their plans are. Here’s what they had to say. All photos are by Ryan Kor.

“I will be the on-air talent video editor for the Atlanta Falcons. It’s just a seasonal job, so it’s just six months while they are playing. I’m excited, because I’ve always loved football, and Atlanta is my home team, and I’m excited to be able to participate in something like that.”

“I’m working for a software sales company called Meltwater, and it sells a marketing software to C-level executives. It’s kind of like Google analytics. It was a pretty rigorous interview process, but I think it was just the right job for me, so it was easy to get it.”

“I have a full-time job offer with Apple. I’m actually going to be the senior technical support. I was in the college program this year, and I did really well and moved up. It’s OK—it’s something to do to start paying off all of these student loans. My goal is to get into management.”

“I am trying to move to Spain to teach in their public school system through the government for a year before I go to law school. They have a holiday right now, so the government is shut down until Monday.”

“When I go back to Texas, I have a volunteership/internship at the Human Rights Initiative of North Texas. They work with people seeking asylum, or they work with undocumented immigrants who are going through the legal system. I’m not getting paid. Most of their interns are law students.”

“I’m waiting to hear back about an interview for a staffing agency. I want to go into human resources. When my brother graduated, he had a contract signed, so now I’m just kind of in limbo. I’m excited to graduate, but I’m also kind of terrified.

“I am currently looking for jobs in Athens. I had some good leads for a little while, and they just went down the drain, so it’s not going so well. But I am excited to move on and do bands stuff and record an EP this summer.”

“After I graduate, I am going to begin my first year of UGA law school. I am very excited about that because pursuing a legal career has always been my plan since the beginning of undergrad, and it’s very nice to see myself moving firmly in that direction.”

“The year after I graduate, I plan on doing an internship at Christian Campus Fellowship. I am very excited about it, because I love ministering to college students.”