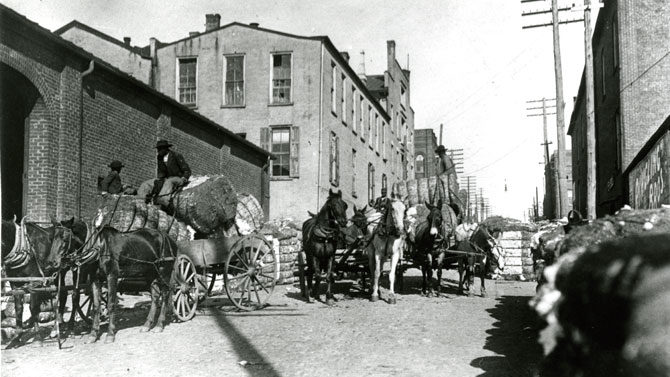 The 20th Century in Athens opened with the country’s most important black intellectual, W.E.B. Du Bois, visiting to deliver a speech to Athens’ black educators in the fall of 1900. In the speech, Du Bois formulated ideas that would compose his landmark The Souls of Black Folk, a book particularly prophetic about the black experience in East Athens. Du Bois would open that book with a question to black Americans, appearing twice in the first paragraph: “How does it feel to be a problem?”

Black Athenians were a problem to the white power structure. Black poverty was in the way, never mind that white power and affluence were absolutely predicated on that subjugated underclass.

The Rev. Archibald Killian, born in 1934, explains how each affluent white neighborhood had a black neighborhood nearby to house domestic help. Black Athenians found themselves just put someplace, like a problem, only to face callous upheaval when that impoverished neighborhood got in the way of wealth and progress for whites. Two black centers, one in east Athens and one next door on College Avenue north of downtown, would be unilaterally razed by the white government, like an occupying army.

“The Bottom” on College Avenue was directly between the train station and downtown, forcing all city and university visitors to slink through the shacks of a black “slum,” as they were called.

The primary black neighborhood in East Athens, called “The Waterfront,” committed the sin of being anchored on a state highway and was punished with total demolition in the mid-century.

Black poverty was a problem for whites, despite the post-emancipation socio-economic order being in many ways a continuation of the pre-war days. The heart of East Athens, the Cook and Bros. Armory, became a vehicle for transferring pre-war white power directly into oppressive power post-emancipation. The armory was purchased after the Civil War by Athens Manufacturing Co., the only mill in Athens to have owned slaves for its workforce before emancipation. The mill’s owners smartly sold their slaves when rebel defeat looked inevitable, trading the soon-to-be-worthless Confederate money for gold, which they housed at the British consulate for safekeeping. In 1870. that money was used to buy the shuttered armory and make it the center of the company’s activity. 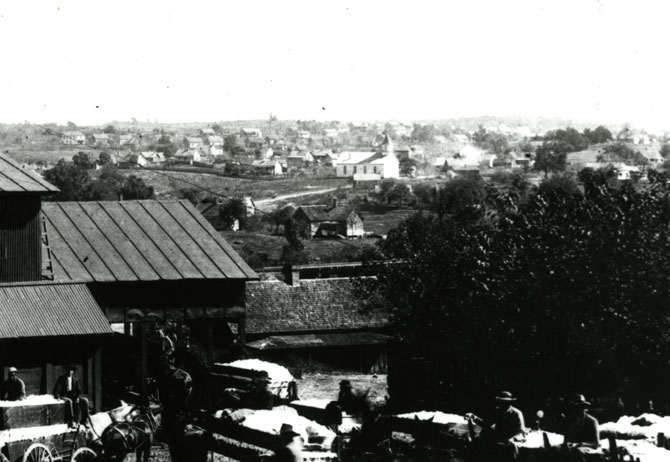 East Athens as seen from Armstrong & Dobbs in the early 20th Century.

Evelyn Wright, also born in 1934, remembers only a small handful of black janitors hired in the otherwise all-white mill. The company’s owners and its exclusively white workforce were still benefiting from slavery very directly, decades after its end.

But East Athens’ whites, too, would eventually face an uncaring hand in the form of post-industrialization and globalization when the mill, now the Chicopee mill, shuttered and moved operations in 1978. Writing about Athens’ textile mills, University of Georgia professor Marion J. Rice describes how “plant ownership by multi-national companies with no home ties and rooted only in profit could easily move to locales where the highest return could be made on investment.”

The mill was sold to multinational conglomerate Johnson & Johnson in 1958. But “the South no longer offers any advantage in cheap labor,” writes Rice, and the working-class whites of East Athens would eventually lose out to even cheaper labor overseas.

Conditions for white mill families were far superior to those of black families outside the white enclave in the Chicopee/Dudley Park area, but that’s not saying a whole lot. Mary Howington and mother Evelyn Brooks live in the humble mill house Mary’s husband received at a substantial discount for being a “boss man” at the mill. Despite her father being in some level of management, Mary didn’t finish high school and picked cotton to supplement the family’s income. The working-class community was close-knit.

“Everybody helped everybody else,” Howington says. “You could leave your doors unlocked.” But no one was safe from the vagaries of global capital. “We’re the only ones left,” she says.

Before these 20th Century problems beset East Athens, the area had to close its feudal agrarian age. In the opening decades of the century, East Athens was still essentially only a modern textile mill surrounded by cotton farms stuck in time. The cotton that blanketed the area from the river out past Nellie B was rocked by the boll weevil in the 1920s, and the fields gave way to urbanization as the early century progressed.

Cotton lined East Broad Street in bale after bale and was grown on virtually every available acre of land east of the North Oconee that wasn’t being used to house mill workers. Aerial photographs from 1938 show vast terraced farms just beyond the mill on First and Peter streets. Cresting the hill on First Street might have felt like stepping immediately back in time to the pre-Civil War days, with black field hands serving immense cotton estates. 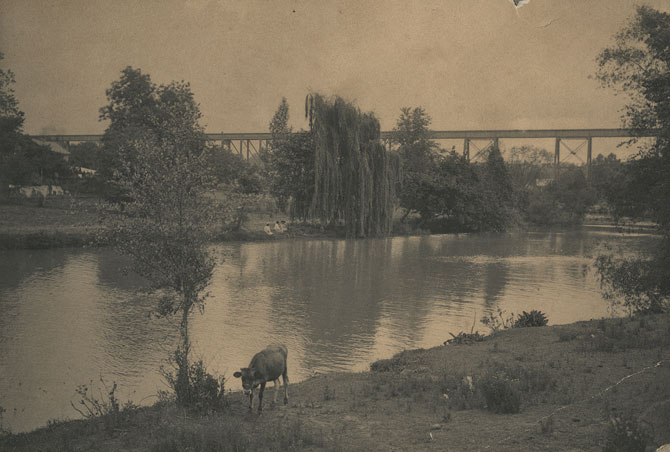 The North Oconee River in the first half of the 20th Century.

But modernity was arriving closer to the river. The east bank of the Oconee, where freed slaves had sought refuge after the Civil War, was becoming a sort of black downtown, with the “The Waterfront” surrounding the bridge on North Avenue as its center. Houses and businesses stood on stilts along the flood-prone river, and alleys, not proper streets, lined the hillside along North Avenue between the river and the low rail bridge on the back northeast corner of downtown.

Killian and Wright remember the little downtown featuring a service station, a barber shop owned by Kilian’s dad, a restaurant, stores, a church and a couple of juke joints and pool halls. Lifelong East Athens resident Xavier Burton, born in 1951, remembers the commercial center still thriving when he was young.

“It was a whole settlement,” says Killian. “You could buy anything you needed.” Businesses on both sides of the bridge sat atop “piers,” as Killian describes it, stilted structures above the river. Killian, who integrated the Athens Police Department in the early 1960s, remembers an early night on the force when he arrived at a packed juke joint just in time to see the bar’s piano crash through the wooden floor and into the river below.

Making something out of the scraps given, building vibrant and sustainable communities, however destitute, black Athenians still found themselves to be a problem. Whites in Athens wanted the advantage of cheap, subsistence-wage black help, but not the effects of keeping half the city unconscionably poor.

“You lived off of nothing, almost,” says Wright. Domestic work for whites was virtually the only work to be had. “A lot of breadwinners went to cook [in white homes] and take care of their kids,” she says.

Men and women lucky enough to work for generous whites might be taught to read and write in the homes. Wright remembers how working in the grand antebellum fraternity and sorority houses was one of the more fortunate and sought-after positions. (A peek into the domestic staff of the houses today reveals that this racial dynamic still exists, with the mansions still replaying a 200-year-old Southern story.)

Despite still doing the most onerous work for the whites, black Athenians were reviled and left to cobble together existences in a brutal apartheid state. Southern apartheid shaped black lives and East Athens in every conceivable way—where and how one lived.

“You could tell who lived where. If it was paved, white people lived there,” says Killian. Wright was plagued by illness as a child and barred as a black child from proper medical care. Her West Athens parents had to give her up to her aunt and uncle in East Athens when the illness became too much of a burden.

So little had changed 50 years later that Black Panther Eldridge Cleaver would echo Du Bois when he wrote about the mid-century civil rights debates in Washington: “We knew that in the end what they were clashing over was us, what to do with the blacks…”

What to do with the blacks? Athens’ answer was no different than that of many Southern cities: Remove them en masse from wherever they interfere with white wishes. Push them out of areas close to the downtown commercial center. Federal urban renewal legislation gave Southern cities like Athens eminent domain power and control of the purse strings of federal cash. Kennesaw State professor Ivy Holliman Way, who studied Southern urban renewal at the University of Georgia, notes how after unilateral removal of residents, “cities were free to then turn around and sell cleared land at bargain prices to private developers.”

You could tell who lived where. If it was paved, white people lived there.

Waves of “slum clearance” and urban renewal would displace whole neighborhoods at a time. Urban renewal could resemble the tyranny of the era’s dreaded Soviets as much as anything democratic, as decisions made by the white political elite determined the existential fate of entire city sections. Novelist James Baldwin termed it “Negro removal,” which was just as accurate in Athens as its official name.

A 1959 report by the U.S. Commission on Civil Rights, a more measured voice than the author of The Fire Next Time, found that “[t]he clearance of slums occupied largely by Negro residents and their replacement with housing accommodations beyond the means of most Negroes gives rise to the question whether slum clearance is being used for ‘Negro clearance.’”

Athens, Georgia, 1801-1951, a book published by the city to celebrate Athens’ sesquicentennial, describes “slum clearance” in 1938, in which black neighborhoods were unilaterally uprooted and residents put in newly built projects. Later city documents from a 1962 round of “renewal” describe how black families were informed of their removal after the process was already begun: “As soon as [the Athens government] acquires a parcel… a staff member will interview the families living on that parcel to explain that the parcel has been acquired.”

This is not to say that the new housing for East Athens residents wasn’t very often an improvement. Much of the black housing east of downtown was run down. Full indoor plumbing was not a feature of the many shotgun houses and substandard structures along the river. River flooding and the attendant mosquitos were a nuisance when they weren’t a health hazard. Newly built housing projects like Nellie B Homes were significant leaps in comfort. Once neighborhood activists like Evelyn Neely, Miriam Moore, Jessie Barnett and Virginia Walker achieved a hard-won measure of self-determination over the money, urban renewal in the form of the Model Cities program also brought much-needed infrastructure like the Athens Neighborhood Health Center.

But residents recall the urban renewal programs as another set of white prerogatives levied against black powerlessness during the last decades of Jim Crow. Wright watched the displacement uproot black communities one after another. Black families “had to move from their homes and find other places to live,” she says. “You were told that it was, you know, ‘urban renewal’ and all that coming in, and that’s just the way it was.” Killian remembers the black downtown on North Avenue razed by the government: “They bought up and tore down those houses, all those alleys, Hobson Avenue [now Martin Luther King Jr. Drive], all that.”

Black families, suddenly tossed out of their homes ended up in the projects or in what little property white compensation for their land allowed. An East Athens friend of Killian’s told him, “They came by and bought our house, and we didn’t have enough money to buy a garage.” Wright is reluctant to sell her home even now to the wave of developers buying up property in East Athens, citing what she sees as another injustice. “That’s the thing—when they come in, you never get your fair share.”