As far as the assassination is concerned, it is my belief that there was a conspiracy, because there were those that disliked [President Kennedy] and felt the only way to get rid of him was to assassinate him.

The year 2013, the 50th anniversary of the assassination of President John F. Kennedy, produced scores of new books about the murder.  Two of the best are Reclaiming Parkland and Survivor’s Guilt.

James DiEugenio’s Reclaiming Parkland (Skyhorse Publishing) is an excellent example of the work-product of the current generation of academics and responsible researchers who, with a few exceptions, reject the Warren Report’s major conclusions, including its Oswald-was-the-lone-assassin theory, a theory which to their credit most Americans have never believed, anyway.  DiEugenio, a leading authority on the assassination, founded Citizens for Truth About the Kennedy Assassination, whose website, ctka.net, is an invaluable source of information on JFK’s murder. 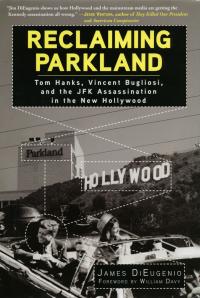 Want to know why it is likely that Lee Harvey Oswald was framed? Why Georgia’s Sen. Richard Russell, a member of the Warren Commission, thought the commission’s investigation was a dog-and-pony show? Why the FBI’s investigation of the assassination was ludicrously inadequate? Why the evidence is suspicious that Oswald ordered or possessed the Mannlicher-Carcano carbine supposedly used to shoot JFK? Why the ballistics evidence connecting Oswald to the assassination is dubious? Why the autopsy of JFK was one of the worst ever? Why the Secret Service’s failure to do its job on Nov. 22, 1963 was covered up? Why New Orleans district attorney Jim Garrison’s investigation of a 1963 New Orleans conspiracy to assassinate JFK was sabotaged by the CIA and its media assets? Why the evidence that Oswald killed policeman J.D. Tippit should not be believed? Reclaiming Parkland provides reliable explanations based on the most up-to-date information.

Survivor’s Guilt: The Secret Service and the Failure to Protect President Kennedy (Trine Day), was authored by Vincent Michael Palamara, who long has been the preeminent authority on the extraordinary—and strange—acts of omission or commission by the Secret Service which made JFK’s preventable murder possible.  Survivor’s Guilt not only catalogs these astonishing lapses (which were covered up for years) but also proves—shockingly—that after the assassination some of agents assigned to protect JFK took part in what Palamara calls a “blame-the-victim crusade,” in which they falsely claimed that JFK had given them directives which thwarted their efforts to protect him.  And, Palamara sagely points out, “[t]o blame the deceased President after the fact is very suspicious, to say the least…”

It has long been recognized that the Secret Service failed abysmally in protecting JFK in Dallas, and Palamara thinks it possible that some Secret Service officials might have been part of a conspiracy to murder JFK. Though terrible to contemplate, this view can no longer be airily dismissed. Indeed, when interviewed by a congressional committee in 1978, a Secret Service Agent in Charge in Florida acknowledged “that, for all he knew, someone in the Secret Service could possibly have been involved in assassination.”

Here is a sampling of the disturbing facts Survivor’s Guilt brings to our attention:

• Unusually, both of the agents in charge of the presidential detail, one or the other of whom would always be at the side of JFK on trips, were taking the day off on Nov. 22, 1963, even though the Secret Service was aware of active plots to shoot JFK while he was motorcading, and even though the city he was visiting, Dallas, was known to be a hotbed of right-wing extremism and Kennedy-hating radical reactionaries. Their replacement was an agent who had never before acted in a supervisory capacity on a major presidential trip. It was this agent, sitting in the front passenger seat, who, when the shots rang out, infamously and in violation of regulations made no effort to get to, shield or warn JFK. (President Johnson later said this agent “was about as dumb as an ox.”)

• When the limousine came under fire, the agent driving the car, instead of reacting swiftly, swiveled his head twice to look back at JFK. He also committed two gross violations of regulations: He slowed down rather than speeding up, and he did not swerve the car.  (At least 50 eyewitnesses, including Dallas police officers, reported that the limousine either stopped or almost stopped.) Only after JFK’s fatal headshot did the driver accelerate.

• When the shooting began, the agent in charge of the followup car five feet behind the limousine, whose job was to keep JFK in sight at all times, “[i]nstead of offering a shout of alarm, alert or orders to his agents to do something… did nothing to help the wounded president.” In fact, he ordered one of the agents who was about to rush to the limousine to remain on the followup car.

• Numerous witnesses remarked on the sluggish response of the agents in the followup car once the shooting began. A Dallas newspaper reporter, Mary Woodward, for example, said in an interview: “I could not believe how well-trained Secret Service people could have reacted so slowly… [H]ad there been proper reaction time the man might still be alive today.”

• “JFK’s military aide, Gen. Godfrey McHugh, a devout Kennedy loyalist, was relegated to the distant VIP car in the Dallas motorcade… [McHugh] was asked by the Secret Service for the first time to ride in the back, instead, as normally  [he] would do, between the driver and the Secret Service agent [in the front seat].”

• Curiously, George Burkley, JFK’s physician, who usually rode in a car not far behind the president’s limousine, was shoved into a bus located far back in the motorcade.

• In a motorcade, the president’s limousine usually would be immediately preceded by an open car or flatbed truck loaded with press photographers. In Dallas, however, for no known reason, at the last minute the press car was shoved far back in the motorcade. This meant, of course, that when the assassination occurred, press photographers could not record the event on film.

• JFK’s motorcade route through Dallas required the motorcade to proceed through, rather than bypassing Dealey Plaza, which was a dangerous place because it was surrounded by tall buildings and otherwise the perfect site for an ambush. To reach the Trade Mart, where JFK was to speak, driving through Dealey Plaza was unnecessary. Under the Dealey Plaza route, JFK’s limousine had to drive along Elm Street after first making a “slow, 120 degree turn, which was a violation of Secret Service protocol and common sense,” Palamara tells us. To this day, it is unknown who in the Secret Service made the disastrous decision to have the motorcade travel through Dealey Plaza, where JFK was the victim of hidden sniper fire.  (Palamara is wrong, however, in asserting that the Dealey Plaza route was the result of a last-minute change of plans occurring between Nov. 18–20.  Although it is true that the route had not been finalized as of Nov. 14, the Dealey Plaza route was adopted no later than Nov. 18, four days before the assassination.)

• In violation of regulations, the Secret Service failed to have the buildings along the motorcade route inspected and also failed to check in advance the Dealey Plaza intersection where the limousine had to make the sharp turn onto Elm.

• The day before the assassination, the Secret Service cancelled a Dallas police plan to have a car full of detectives with automatic weapons inserted into the motorcade two or three cars behind the presidential limousine.

• Also the day before the assassination, and most unusually, the Secret Service weakened escort security by ordering that the number of police motorcycles in the motorcade be reduced, and by directing that the motorcycles near the limousine should not flank it but instead position themselves at its rear. This meant that JFK was significantly less protected than he had been the day before when motorcading through San Antonio, a much less dangerous locale. As a congressional committee acknowledged in 1979, “The Secret Service deprived Kennedy of security in Dallas that it had provided a mere day before.”

• Prior to the assassination, the Secret Service knew of recent threats on the life of JFK and of active plots to kill him. In fact, “the White House detail had a pretty good idea that somebody had been stalking [JFK] for a long time.” (Palamara adds: “The odd, preternatural obsession JFK had with death that developed right before Dallas was likely due to his knowledge, directly or indirectly, of the threats on his life.”)

• The Secret Service’s claim that its Protective Research Section disclosed no “subjects of record” who might pose a danger to JFK in Dallas “is simply impossible,” given the city’s “rabid right-wing environment… and countless other threats.”

Reclaiming Parkland and Survivor’s Guilt are among the multiple reasons why it should now be evident to Americans that they were hornswoggled by the Warren Report when it claimed there was no conspiracy behind the JFK assassination and whitewashed the suspicious behavior of the Secret Service before and on Nov. 22, 1963.

Donald E. Wilkes, Jr. is a professor emeritus at the University of Georgia, where he taught in the law school for 40 years. This is his 38th published article on the JFK assassination.