Local Bike Riders Go Where Rails-to-Trails Are a Reality 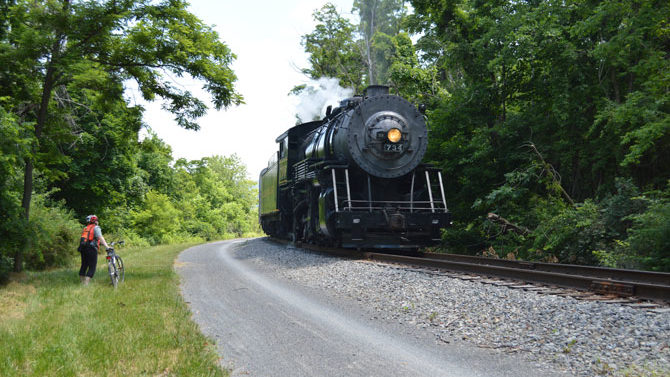 Heidi and Al Davison, Jeff and Becky Engel, Pat Schlotzhauer and Pat Rieber traveled five days and more than 190 miles June 22–27 along three greenways: Panhandle Trail, Montour Trail and the Great Allegheny Passage. We passed through three states—West Virginia, Pennsylvania and Maryland—and 26 towns and cities with 294 other people. The youngest rider was 5; the youngest pedaler was 7, and the oldest was 81. They came from Oregon, Vermont, Florida and places in between, including a Canadian couple who said America’s rails-to-trails are the envy of their country.

Out of our tents by 8 a.m. each morning and on the trail by 9 a.m., our journey was a feast for the ears and eyes. We experienced one flat tire, one switchback and a muddy, puddle-filled trail after one big rainstorm. Two rivers flowed alongside or under us for most of the way: Youghiogheny, known as the “Yough,” and the Casselman. In Glassport, we crossed the Monongahela, where U.S. Steel operates. 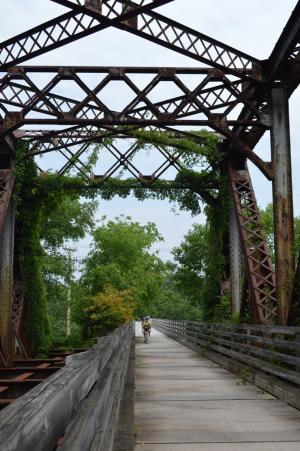 Wow, what views from those trestles and viaducts! The two trestles (the McDonald, at 950 feet, the longest) and two viaducts, including the 1,908-foot Salisbury, didn’t disappoint. Many other trestles carried 30 trains a day through the corridor, which trained our ears well enough to identify wheels on tracks far off in the distance. Train tracks followed us either on the opposite side of the river or right next to our trail. We even got to watch an engine get turned around at the end of the line.

It’s fun to laugh, sing or make scary noises, but even more so while passing through a tunnel. We took full advantage of the six tunnels, with the Big Savage, built in 1910–1912, being the longest at 3,300 feet.

Gorgeous vistas, tunnels of trees, wildflowers, waterfalls, massive rock formations and critters of many varieties—my favorite being the head of a buck at trail level watching us ride by—were a part of every day’s ride. The nightly light shows of the fireflies were dazzling and spectacular. Public art was whimsical and plentiful—see trailtowns.org and artonthepassage.wordpress.com.

With a bike shop in every town, we quickly parted with our bills and coins. Towns and townspeople embrace the trails, visitors and money they bring. Volunteers met us at local parks to help us locate places to eat, explain a trail improvement project, and entertain and feed us. We enjoyed local music, homemade ice cream, suppers or breakfasts cooked by either the local fire department or a service organization, and both yummy and functional wares by the Amish.

In Connellsville, PA, we rolled along the separated bike path, marveling at the beautifully planted median maintained by businesses, garden clubs and other groups. The Montour Trail Council, begun in 1989, now owns three dump trucks, a road grader, street roller and spreader box.

Before reaching Mile Marker 0 in Cumberland, MD, on our last day, where it connects with the C&O Canal to Washington, D.C., we crossed the Eastern Continental Divide, the highest point at 2,375 feet elevation, and the Mason-Dixon Line dividing the North from the South.

What a trip! As we traveled north to begin our journey, a billboard along the highway grabbed my attention with the words “Wicked Fast.” Someone asked if the area was mountainous or hilly. The answer is, “Yes.” No bare knuckles, no taking one’s eyes off the road for even a split second, no pulling over as the only way to enjoy the scenic outlook. While cars navigated the twists and turns, as well as frequent 9 percent grade changes, we rolled along, wicked slow, in the scenery on a flat surface (1 percent grade) until the last 10 miles, when our speed signaled descent.

After spending considerable time studying touring options, hoping to find one that matched our speed and endurance, plus love of the outdoors, small towns, public art, etc., this was the one— a rail-to-trail corridor primarily through the beautiful Pennsylvania woods. Now we’re looking for our next ride—ready to go again!

A version of this account ran in the July 16, 2014 Bike Athens Newsletter.