What Else Is on the Ballot? 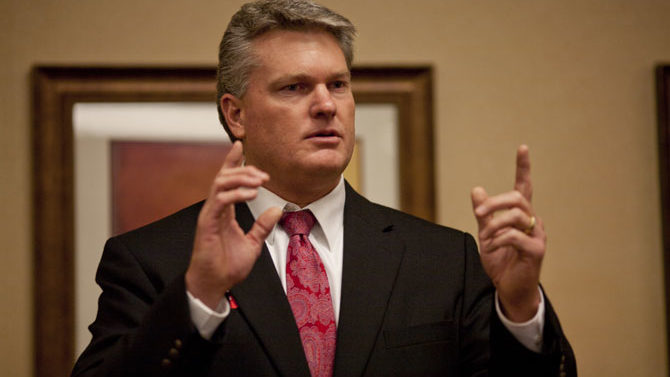 In addition to District 3 commissioner, Athens voters will be choosing nominees for Congress, U.S. senator and state school superintendent.

Democrat Ken Dious, an Athens lawyer and civil rights activist, awaits the winner of the 10th Congressional District Republican primary, but for all intents and purposes, the election will be decided Tuesday. (Rep. Paul Broun left the seat open in a failed bid for U.S. Senate.) The district—which stretches from Gwinnett County to Augusta and Athens to Milledgeville—leans heavily conservative. Whichever Republican emerges is very likely to win in a landslide in November.

Hice, who one could say is running as “Paul Broun Jr. Jr.,” previously ran for Congress to succeed FairTax founder John Linder in 2010, losing to Rep. Rob Woodall. He has gained national notoriety in recent weeks as reporters have dug into his past statements about women’s rights, Islam and a host of other topics. 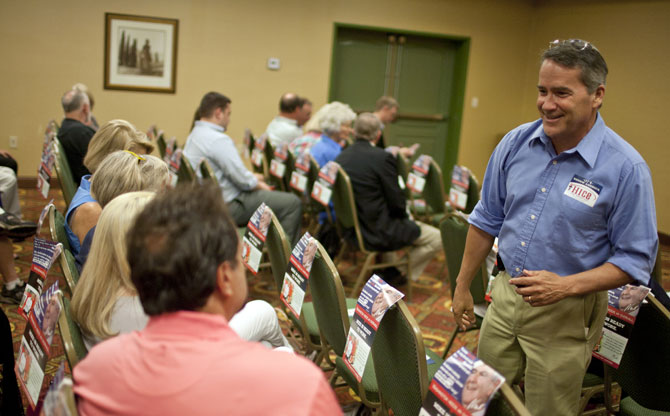 Jody Hice campaigns at a June meeting of Athens Republicans.

A decade ago, Hice convinced the Barrow County Commission to post the Ten Commandments in the county courthouse, leading to an American Civil Liberties Union lawsuit that put taxpayers on the hook for a six-figure legal bill. He also challenged federal laws regulating tax-exempt nonprofits’ participation in politics by endorsing candidates from the pulpit. These are points of pride for Hice. “We have been on the front lines for years and years and years,” he told the Athens GOP last month, recounting his battles with the ACLU and IRS.

Hice told the Athens Banner-Herald in 2004 that he’s fine with women running for office, “as long as they’re within the authority of their husbands.” More archaic ideas pop up in his 2012 book, It’s Now or Never: A Call to Reclaim America. In the book, Hice denies that Islam is a religion worthy of First Amendment protection, compares requiring a Christian to serve a gay customer to requiring an African-American to attend a KKK rally and raises the specter of Satanists taking over schools, among other controversial statements.

He’s currently campaigning on a typical tea party platform. He calls the tax code “immoral” and wants to replace it with a national sales tax; says he will oppose any bailouts, economic stimulus or effort to raise the debt ceiling; wants to abolish the U.S. Department of Education and repeal health care reform; and says he would’ve voted against the recent bipartisan farm bill because “it’s really a food stamp bill.”

Collins is, perhaps, slightly less far to the right. (He’s been endorsed by Rick Santorum, Newt Gingrich, Karen Handel and Barbara Dooley.) But he can talk the anti-Obama talk, too. “We’ve got a federal government that’s trying to socialize the American public, create a dependency culture,” he said at the June 9 Republicans meeting. “They’ve done a good job removing God and replacing him with government.”

However, he aims his rhetoric at economic issues more than social ones and has exhibited a willingness to compromise at least somewhat. “We’re so tired of the gridlock, the divisiveness, showboating, camera chasing,” he said. “…If I can walk in and get 80 percent of the deal, I’m going home, y’all.”

In spite of having virtually no chance of influencing policy as a freshman congressman, Collins is touting a plan he calls “Overhaul DC.” It’s a hodgepodge of conservative ideas like repealing Obamacare, implementing a flat income tax or national sales tax, raising the retirement age for Social Security, repealing banking regulations passed after the 2008 crash, slashing corporate income taxes, building the Keystone Pipeline and passing a balanced budget amendment.

On the Republican side, anti-Common Core teacher Richard Woods faces pro-Common Core Mike Buck, a top deputy to current School Superintendent John Barge, who didn’t run for re-election so he could try (and fail) to oust Gov. Nathan Deal.

In a race that hinges on charter schools, state Rep. Alisha Thomas Morgan of Austell (who supports them) faces Valarie Wilson (who opposes them) on the Democratic side.

Anyone who’s registered can vote in the runoff, regardless of whether they voted in the May 20 primary. However, those who voted in May must choose the same ballot, Republican or Democrat. For District 3 residents, both ballots will include the nonpartisan commission race.

Early voting will continue from 8a.m.–5 p.m. through Friday, July 18 at the ACC Board of Elections, 155 E. Washington St.

To find out what districts you’re in and where your Election Day (Tuesday, July 22) polling place is, visit mvp.sos.ga.gov.