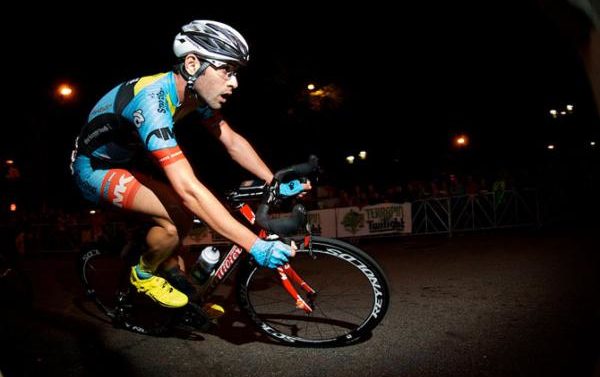 We all know Athens is a bike-friendly town, but not everyone knows that the city plays host to one of the premier cycling events in the country.

The Twilight Criterium Saturday, Apr. 26 will bring an estimated 25,000 people to downtown Athens. Not all of them are bike racing fans—it’s a fun weekend with something for everybody—but watch it once, and you might get hooked. “It’s new for everybody that’s new, and that’s a lot of people,” founder Gene Dixon says.

In particular, Dixon is pushing Twilight’s Friday events this year. They include an expo and sports zone with a climbing wall, a music festival (see p. X) and qualifying that will determine the starting orders for the Saturday night races.

For the uninitiated: Criterium racing ain’t the Tour de France. Cyclists do 80 one-kilometer laps around downtown pedaling nearly full-tilt, working in teams to spring their fastest racers free from the pack (in what’s called a “breakaway”) for a sprint to the finish line. Wrecks are common as racers who are mere inches apart pedal at 30 miles per hour around corners, which are the best places to watch the action.

The dominant United Healthcare team isn’t participating this year, so Dixon says about 10 teams have a chance to win. In particular, he urges spectators to keep an eye on the hometown team, the 706 Project, founded by Athens resident Eric Murphy. “The team in Athens, the 706 Project, those guys have a real chance this year,” Dixon says.

The 706 Project’s new star is Frank Travieso, a Cuban immigrant who settled in Athens 10 years ago and finished third last year, when he raced for Team SmartStop-Mountain Khakis. It also features up-and-comer David Cueli of Miami. “Kid’s like 20,” Dixon says. “He’s got a chance to be a great racer.”

But there’s more to Twilight than the criterium. The weekend also features a 5k run, a mountain bike race, kids’ activities, food trucks, beer tents (see p. X) and a BMX contest. The full schedule is below.