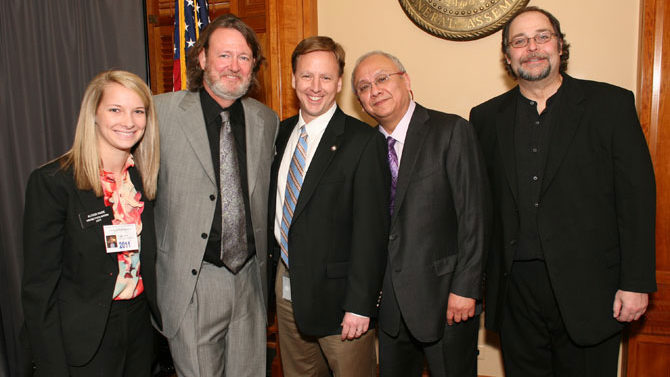 Ten years ago, Georgia’s film and television industry was virtually nonexistent. When they wanted to film on location, Hollywood producers generally went to places, like Louisiana, that offered them tax breaks instead of Georgia.

The Georgia legislature passed its own tax incentives in 2005 and revised them in 2008. Last year, TV and film productions spent $3.1 billion in Georgia, according to the state Department of Economic Development.

“Can we do for the music industry what we did for the film industry in Georgia?” asks state Rep. Margaret Kaiser (D-Atlanta).

Kaiser serves on a state House of Representatives committee, chaired by Rep. Ben Harbin (R-Augusta), that’s considering incentives for Georgia’s music industry. The committee held a hearing in Athens in October—taking testimony from a number of heavy hitters in the local music biz—and visited several other cities around the state.

Big, But How Big?

It’s obvious that music is big business in Athens—just look around downtown on a Friday night. One problem in coming up with incentives for music, though, is that no one knows just how big.

“I don’t know of any studies that have been done locally,” says Ryan Moore, director of the Athens-Clarke County Economic Development Department. “To be honest, that’s a good question. We tout the music industry and its impact, but there’s really no way to quantify it.”

A study commissioned by the industry group Georgia Music Partners in 2011 put the statewide figure at $3.8 billion. The music industry employed 8,842 people in Georgia, including artists, producers, publishers, teachers, manufacturers, promoters and record-store clerks, according to state Department of Labor statistics. The music industry in Georgia had an average salary, believe it or not, of $54,924.

Tourism is a $250 million annual business in Athens, and football is responsible for less than 10 percent, says Chuck Jones, director of the Athens Convention and Visitors Bureau, but music-related figures aren’t broken out. Still, Jones believes it must be substantial.

“When I travel to places like the Ukraine, South Korea, they don’t know us necessarily for the University of Georgia, they know us for the music scene. It’s amazing,” he says.

Barrie Buck has seen the growth in out-of-town visitors firsthand. The 40 Watt Club, which she owns, used to have a “clubhouse feel,” she says. Now, when people buy tickets with credit cards, she knows where they’re from, and she is amazed at the number of people she doesn’t know who come to shows.

In addition to putting money in the pockets of retail, bar and restaurant workers and artists (well, sometimes), music also creates a quality of life that benefits other industries, says Brian Brodrick, who runs the public relations firm Jackson-Spalding’s Athens office. “Three of the most talented people in my office since we opened eight years ago have a music background,” Brodrick says. “In fact, they’re probably in our office because of the music scene.”

How Would It Work?

While the committee hasn’t issued its recommendations (the legislature convenes Monday, Jan. 13), the model is the 20–30 percent tax credit for film and TV productions that have made Georgia the 5th-largest location in North America, behind California, New York, British Columbia and Louisiana, according to Film Works L.A.

The tax credit applies to music videos, as well as recordings and compositions that are part of a qualified film, TV or video game production, according to Lisa Love, director of music marketing and development for the Georgia Department of Economic Development. Love says she doesn’t know how many tax credits have been granted to music-related projects, but she expects artists and producers to benefit from growth in the film and TV industries.

Like tax breaks for big corporations such as Caterpilllar, though, the film credits don’t always benefit the little guy. Tax credits are only available to half-million dollar productions or larger, and very few artists spend that much to record an album, says David Barbe, owner of Chase Park Transduction studio and head of the University of Georgia Music Business Program, which trains hundreds of students to enter the field each year. The “sweet spot”—what most artists will spend—is $10,000–$50,000, Barbe says.

Moreso than the film industry, though, music has been wracked by changes. A generation has grown up without ever paying for music, instead listening and watching for free on the Internet. “The music business has shifted,” Barbe says. “It’s not going away.”

R.E.M.’s former equipment manager, DeWitt Burton, points to successful festivals like Bonnaroo and EDM and hip hop concerts in Atlanta that flew under the media’s radar but drew tens of thousands of people. Popular bands like Mumford & Sons make money by selling tickets and merchandise, not CDs, Burton says. “Live music, in my opinion, is the future of the music business, and festivals,” he says.

Troy Aubrey, the booker at The Melting Point, pitches funding to market Georgia music to tourists. “It’s nationwide. It’s international,” he says. “They spend money in our clubs and stay in our hotels. We need to spend money to market to them and get them to come to our festivals.”

Another avenue, according to Barbe, is music publishing, a lucrative business that’s primarily based in New York, L.A. and Nashville. Songwriters who graduate from UGA often move to Nashville, making Georgia a music exporter. “The music publishing business is incredibly lucrative,” he says. “It absolutely could be done from Athens.”

There’s also a concrete component to music (yes, still), says Tommy Robinson of New West, the Austin, TX-based record label with an office in Athens. Vinyl now makes up 30 percent of physical music sales, and cassettes are making a comeback, too. “We need, not the glitz, but the nuts and bolts,” Robinson says. “We would love to have it in Georgia. It would be an amazing thing. It would be a lot of new business, hundreds of jobs.”

Investing in music education could be another, albeit longer-term, way to expand the industry in Georgia. Locally, the Clarke County School District has avoided cutting the arts in the face of state cuts to education, deputy superintendent Noris Price says. The district has free after-school music programs and concerts—some of it funded by the nonprofit AthFest Educates.

“I’m shocked at how robust music and arts programs are, as much as we slashed,” Kaiser says.