Taking the Megabus to Minneapolis 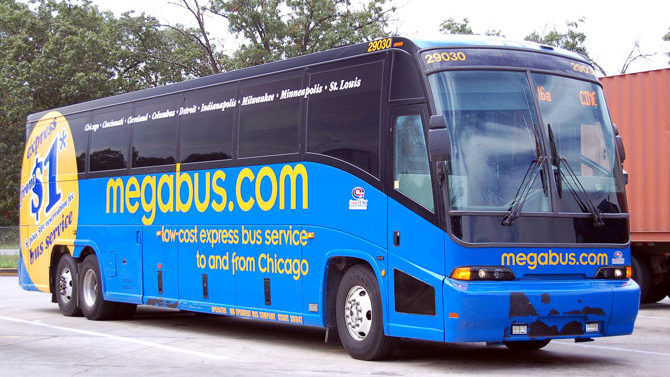 It started, innocuously enough, with a post from a friend who lives in Minneapolis.

“I’m having some minor foot surgery… maybe I should arrange a few house guests who are up for helping?” (A strange and cunning plan.)

I replied: “Alas, my lack of much job (which would make it possible for me to leave home for a couple weeks) also means lack of money (which makes it impossible to get there).

And a few hours later: “Hmmmm… some poking around reveals that I could actually get there via Megabus in about 36 hours for about $100 plus meals. Adventure?”

And thus it began.

The round trip, for the specified dates and including booking fees, ended up being $202. My friend offered to pay half. My husband allowed as how he could handle the dogs, cooking and laundry for a week. I wasn’t at all sure I could handle sleeping on a bus, but there was one way to find out.

I made my reservations and started packing.

Megabus, for those who haven’t experienced it, is a company specializing in city-to-city express bus service, serving major cities in the UK, the U.S. and Canada. It offers very low fares on the first few seats on each bus; the price increases as the bus fills up. Megabus has no bus stations or ticket counters. It takes reservations only via Internet, and the buses stop at or near existing facilities, or sometimes just in a vacant lot or on the street.

Megabus has been active in the U.S. since 2006. Service to Athens was added in 2012. Atlanta is one of their hubs. Though the rest of the operation is decidedly no-frills, the buses themselves are fairly comfortable, with narrow seats that recline slightly. There are usually power outlets at some or all seats, and there is often but not always WiFi.

Boarding and debarking tended to be awkward, with lots of jostling and crowding. People tried to check bags over the 50 pound limit and then had to unpack and redistribute things on the sidewalk. Only one of our drivers insisted on giving first choice of seats to elderly and disabled riders or those traveling with small children, and only one driver (not the same one) asked us to stay on the bus until the luggage was unloaded. The rest of the time it was a free-for-all. But once underway, people were polite and cooperative, helpful with little things like offering tissues, plugging charger cords into awkwardly placed outlets and trading seats so family groups could sit together.

Except for the Atlanta to Athens bus, all the buses, even the overnight ones, were full. Sleeping was awkward and uncomfortable at best. If your seat partner brought a sleeping bag or a twin-sized comforter for warmth, it got even more crowded. And those poor souls sitting next to me had to put up with my restless legs and fidgeting, for which I apologized (apologies graciously accepted). 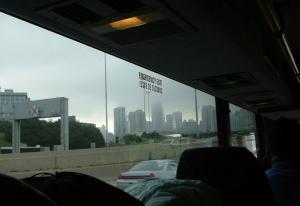 The Chicago skyline as seen from a Megabus.

Things have changed since the last time I took a long-distance bus trip back in the late ’70s. For example, most folks had iPods or tablets or smartphones or laptops, so there was less impetus to make conversation with strangers.

One exception: the woman several rows behind me who talked all the way from Chicago to Minneapolis—eight solid hours. When she stepped off the bus briefly, about half a dozen of us looked incredulously at each other and exchanged some pretty barbed comments. Seriously, don’t be that person. We do not want to hear your views on Antonio Banderas’ marriages, your ex-husband’s dirty jokes or how much he resembled your best friend’s father. Ew. I was mostly able to tune out the monologue while my Jim Butcher novel lasted, but I ran out of book before we ran out of road.

There were highlights. The three young cousins all between five and seven years old, traveling with their grandmother from Minneapolis to Chicago (overnight) were excited and pleased with just about everything: the reclining seats (“Ahhh, this is the life!”) their Lunchables (“These are the BOMB”) and of course their grandmother (“Gramma, you’re the BEST!”). Not one whining word did they utter, despite having to wake up and disembark when the bus refueled at oh-dark-thirty.

Another highlight was our driver on the Atlanta to Memphis leg. The consensus among several of my fellow-passengers was that he sounded like 50 Cent. He had his spiel down to an art:

And in response to concerns about our layover and connections in Memphis (two-plus hours after dark, outside a closed bus terminal): “I got a manifest here, there’s 15 people going from Memphis to Dallas and five people going to Little Rock. Little Rock rides with Dallas. There’s 15 people going to Chicago. So you’re not gonna be alone, there’s gonna be a bunch more people with youse. Whatever you ain’t got some of them other people got, information wise. Alls I do is go from Atlanta to Memphis, back and forth.” 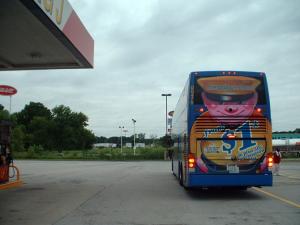 There were low points as well: our bus from Memphis to Chicago was delayed, supposedly (according to Megabus’s cell phone messages) by 30 to 45 minutes, but actually by nearly an hour and a half. The transit station where the bus stops is closed on Sunday nights, leaving us to wait on the side of the road with one tiny bus shelter for more than 30 people. (A nearby restaurant is open till 3 a.m., so we could have waited there if the weather had been bad.)

People complained and commiserated and practiced dance moves and let other folks have a turn on the bench, though, so it was bearable, if tedious. Delays like this, along with the tight seating, led to the frequent refrain of “next time I’m taking Greyhound” on several legs of the trip. We did indeed cut it pretty close, and I got on the Chicago to Minneapolis bus with about five minutes to spare, as compared with the hour and a half layover originally scheduled.

Even from the upper deck, you don’t see much of the country, though you get a feel for the general shape of the landscape. I did get a couple of good views of the Mississippi River and the dramatic but vacant Pyramid Arena in Memphis; I saw my first wind farm in Ford County, IL, and some pretty imposing sandstone buttes near Tomah, WI. And when we got to Minneapolis, the lilacs were in bloom.

All in all it was a fairly pleasant trip, though I don’t recommend the back-to-back overnights I endured on the way home. I got there safely, had a great visit waiting on my friend, got home in one piece with all my luggage, and would probably do it again (without the double overnight).

• Buy tickets early. Megabus prices the first few seats on each bus very attractively, but then the prices go up steeply. Mid-week is cheaper than weekends; some times may be cheaper than others.

• Don’t try to cheat on the luggage weight limit. You’ll just slow down departure and make everyone cranky.

• When you make your reservations, you’ll get both a confirmation number (that your payment has been received) and a reservation number. You will have to show the reservation number to the driver in order to board the bus. Don’t bring the wrong number. This will also slow down departure and make everyone cranky.

• Don’t schedule too tightly. Buses may be late, and if you miss a connection, the next bus may not have any seats available. Changes can only be made up to 24 hours before your departure time, so by the time you realize you’re going to be late, it’s too late to change your reservation. Also, Megabus only takes reservations online, so if the WiFi on the bus isn’t working, you may not be able to reserve a replacement seat even if there’s one available.

• Wear layers. The buses are almost always cold, and when they’re not cold, they’re hot. My $2 thrift-store pashmina shawl turned out to be just about perfect: good size, light, washable, not at all bulky and packs down very small.

• Bring something to do in case the WiFi fails or your seat doesn’t have a working outlet. A book or e-reader, knitting or crochet, whatever. Just keep it small.

• Research your stops ahead of time. Megabus doesn’t have bus stations; it often stops near, but not actually in, local transit facilities (e.g. the curb outside the MARTA Civic Center station in Atlanta). The Chicago stop is across the street from Union Station, which has a food court, restrooms, locker rentals, and all sorts of amenities. The Minneapolis stop is in a vacant lot in an intimidating neighborhood. The Memphis stop is next to a MATA station that’s closed on Sunday nights. Don’t expect help on this from Megabus’s customer service; the only information they can give you about a stop is its address.

• Although Megabus advertises handicapped-accessible service, none of the buses I rode were accessible. The bathrooms and aisles emphatically were not. Use caution and research carefully if you require any assistance beyond a cane.

• Be sure you know which bus is which. I saw a couple of people get stranded because, for example, they didn’t know they needed to be on the Dallas bus to get to Little Rock. There’s often more than one Megabus at a given stop at a given time. Be mindful. It never hurts to ask the driver, “Does this bus go to X?”