Did ADDA Director Kathryn Lookofsky and ACC Auditor John Wolfe Fall, Jump… or Were They Pushed? 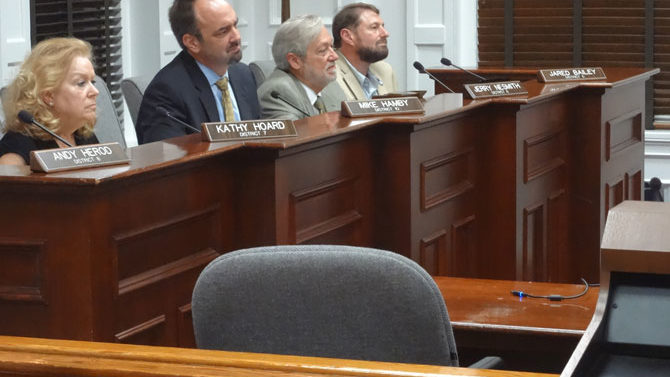 When the Athens Downtown Development Authority board voted not to renew former executive director Kathryn Lookofsky’s contract in December the party line was that they had mutually decided to part ways. Documents obtained by Flagpole through open records requests indicate that Lookofsky was forced out in spite of seven years of competent job performance, and that the collateral damage hastened the end of the 20-year career of the county auditor, whose report on the ADDA put the blame for downtown problems on the Athens-Clarke County government rather than on Lookofsky.

According to County Auditor John Wolfe’s notes, some ADDA board members had already made up their minds prior to the Dec. 18 meeting where they voted not to renew Lookofsky’s contract. Mayor Nancy Denson told Wolfe, according to his notes, that the vote not to renew Lookofsky’s contract could have been close, but the board members decided to make it unanimous. (Most auditors look strictly at finances, but in Athens-Clarke County, the auditor and staff examine how departments operate, trying to find efficiencies and solutions to operating and space problems.) 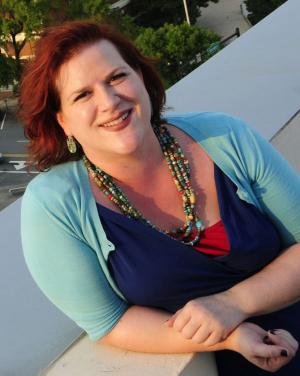 Does Kathryn Lookofsky look like she’s dressed too young?

Denson’s reasons for wanting to get rid of Lookofsky, according to Wolfe’s notes, were that Lookofsky appealed only to people who work downtown at night—bar and restaurant employees—and didn’t fit with daytime business owners. Wolfe’s notes also quote the mayor as saying that Lookofsky “dresses too young, she wears her clothes too tight.”

Denson denied making those comments. “I really have nothing negative to say about Kathryn,” she said. “That is not the kind of thing that would come out of my mouth… It was very disappointing to hear that.”

Lookofsky did have support among downtown merchants and government officials outside the ADDA. As part of a “360 (degree) review” of Lookofsky’s performance, board member Brian Brodrick solicited feedback in June, 2012 from business owners and county officials. Flagpole also obtained these responses through an open records request.

Sandi Turner, who lived and owned businesses downtown, as well as serving as the ACC government’s public relations officer until moving to California last year, wrote in support of Lookofsky, as did downtown police and Athens Convention and Visitors Bureau officials. ADDA and ACC employees mostly praised her in anonymous performance reviews.

In particular, Lookofsky drew high marks for marketing downtown. “She developed a visual identity for the district and set about encouraging people to understand the many facets of business—both day and night, retail and hospitality,” Turner wrote in June. “She also examined the reasons people gave for NOT coming downtown and diligently worked to overcome the wrong impressions people had of downtown.”

Annual sales of gift certificates redeemable at dozens of downtown businesses tripled to $60,000, which Turner called “nothing short of extraordinary.” Lookofsky oversaw the creation of a new website, partnered with University of Georgia public relations classes, participated in student and faculty orientations, bought ads on Athens Transit buses and BikeAthens’ map of bike lanes, used local music in radio and television ads, built up a stock of professional photos of downtown, started offering downtown-branded promotional materials like pens and stickers, and ramped up the ADDA’s social media presence with a YouTube channel and a Facebook page that has more than 15,000 “likes.” The branding campaign was “top notch,” according to Amy Clark, former Athens Convention and Visitors Bureau leisure travel marketing director.

Downtown stakeholders also praised Lookofsky’s ability to navigate among downtown’s disparate interests. “Kathryn’s goals appear to me to center around finding a fair balance between what businesses in Athens want for themselves, what the Board members want, as well as what it would take to attract more business to Athens,” one ACC employee wrote. “More often than not, those separate considerations are not parallel, and create difficulties for anyone trying to find the best practices that will benefit all parties. I give credit to Kathryn for maintaining an ambassador’s demeanor while executing her duties.”

While the ADDA is independent from the county government, it relies on the government for funding, and the job of executive director involves talking to county staff about issues like trash pickup and potholes.

“She works extremely well with multiple departments within the ACC Government as well as businesses, organizations and visitors alike,” another county employee wrote in a performance review.

“Given clear direction and priorities, I believe Kathryn can be quite effective in promoting and improving downtown Athens,” ACC Central Services Director David Fluck wrote.

The outpouring was not enough to save her job. Denson noted that “it’s not a popularity contest.” Five of the seven members of the ADDA board gave her a mixed performance review before renewing her contract last summer.

Areas in which the board said at the time that Lookofsky “needs improvement” included communicating with the board, keeping the board informed to avoid surprises, being open to ideas from the board and following up on issues raised by the board.

The board and Lookofsky disagreed on whether to hire UGA professor Jack Crowley to write a downtown master plan on the cheap or hire a private firm, whether to move the ADDA’s offices to the Chamber of Commerce building and who is responsible for keeping downtown clean.

In interviews with auditors in 2012, board members disagreed on a number of important issues, such as the need for more downtown events like a 2011 food truck festival, how much the ADDA should focus on parking, and whether it should be in the parking business at all. (The county government contracts with the downtown development authority to enforce parking laws and operate several downtown decks and surface lots.)

Bill Overend, now the authority chairman, told Wolfe the board lacked vision and cohesion. Brodrick said members didn’t have enough training. Former board member Tony Arnold, owner of Jackson Street Books, said the board didn’t function very well when he was on it.

Former mayor Heidi Davison, who served on the board by virtue of her office from 2003-2010, was even harsher. Davison said the board—made up of the mayor, a commissioner (currently Mike Hamby), an Athens Area Chamber of Commerce representative (Brodrick), two downtown business owners and two downtown property owners (Overend, Chris Blackmon, Erica Cascio and Regina Quick) appointed by the mayor and commission—is too small, lacks perspective, training and leadership, excludes people who live, eat and shop downtown and doesn’t understand the extent or limits of its power.

A lot of these problems were solved at an ADDA retreat in September where board members all got on the same page, Hamby said. According to a summary of that retreat, board members brainstormed more than 100 tasks and goals, with a focus on converting bars into offices. A month after the retreat, Lookofsky worked out a deal with the tech startup incubator FourAthens to lease vacant office space at a discount.

A few of the tasks were contradictory; for example, the board said Lookofsky should stop participating in biweekly meetings with ACC department heads, after having emphasized the need for cooperation with ACC. In the end, Lookofsky was given three months to accomplish things that even the board felt would take 18-24 months to complete.

By last December, county officials already had a pretty good idea of what the audit of the downtown development office would report, although it would not be made public until the following month.

Auditor Wolfe apparently knew that he was in trouble, although no one will say why. In a cryptic entry in his notes from his Dec. 18 interview with Denson, Wolfe quotes himself asking Denson how long he would be on “probation” and what he could do to remedy the situation. Wolfe’s notes quote Denson as saying, “I don’t know if you can.”

Wolfe’s personnel file, also obtained by Flagpole, includes no mention of probation, though. In fact, records show that he received merit-based raises in a number of the 20 years he was auditor.

“We had seen very little work product for the past two years,” Denson told Flagpole. “That’s why I felt like he’d lost the confidence of the commission.”

Prior to the ADDA audit released Jan. 18, Wolfe’s office produced a report on the Solid Waste Department in April 2011 and a follow-up on county probation services that October. The ADDA audit took 14 months to complete, several sources said, because Wolfe felt political pressure to come up with an excuse to fire Lookofsky. One source called the idea of a connection between the ADDA audit’s recommendations and Wolfe’s firing “very accurate.”

Was there pressure on Wolfe to produce a certain outcome?

“Not to my knowledge,” Denson said. “I don’t know what other people did.”

When asked the same question, Hamby replied, “That’s not true at all,” adding that he was happy with the audit in general, although he thought it missed a few issues, like trucks unloading in center lanes. “The only thing I ever said was, ‘John, when’s the audit going to be done?'” Hamby said.

The ACC Mayor and Commission, who were fingered by the auditor’s report for skimping on resources to clean up downtown, met behind closed doors Jan. 2 and again Jan. 17 to discuss personnel matters. In those meetings, they made the decision to fire Wolfe, although it wasn’t formalized until June, when his two-year contract wasn’t renewed. The ADDA audit “was not talked about in the meeting about Kathryn (Dec. 18), nor in the meetings about John,” Denson said.

If Wolfe was dragging his feet, he wasn’t the only one. The ACC commission’s Audit Committee never met during that time period. And, six months after the audit was released, the ADDA board still hasn’t released a response to it that members said they would write in February. (It could be ready within the week, Hamby said.)

Hamby had pushed for a cleaner downtown and had called cleanliness (or lack thereof) the biggest complaint about downtown. He had pressured Lookofsky to do something about it.

In spite of the audit’s recommendations putting the responsibility for cleaning up downtown on the county government, of which he is a part, Hamby told the county commission’s Audit Committee in February to leave downtown cleanup to the ADDA, of which he is also a part.

“We’re literally coming up with a strategy to make sure downtown’s clean,” he said. “Give us a chance to finish that discussion.”

Meanwhile, the auditor’s office is shuttered, and Wolfe’s two former employees are working in other departments. The gossip in political circles is that those positions may never be filled, that the mayor and commission may abolish the job of auditor.

That’s been suggested, according to Denson, but “it is of great value to the government,” she said. According to the mayor, the commission is scheduling a retreat, where it will discuss refining and restructuring the position of auditor.

“I think we need the right person in that job,” Denson said.