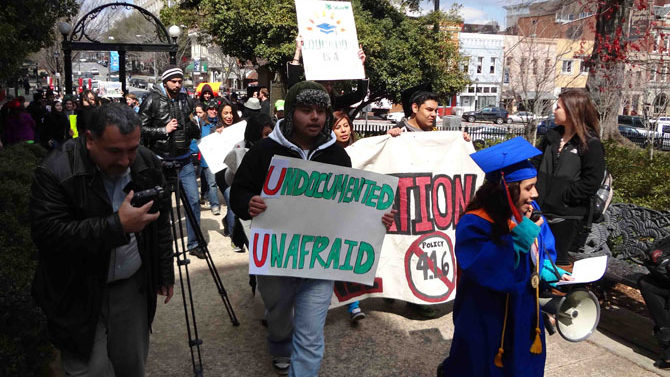 The past two years have seen an explosion of advocacy, events and activism around issues faced by Athens’ immigrant community. According to one organizer and founder of Dignidad Inmigrante en Athens, just a couple of years ago there was barely any awareness or civic dialogue around immigration issues in the city. Today, even if you are one of the hundreds of people in Athens now volunteering time and energy to immigrant issues, it’s almost impossible to keep up with the proliferation of panel discussions, film screenings, rallies, training sessions and strategic convergences popping up this spring.

Athens is showing up almost weekly in national media for the robust efforts of a wide range of people working to push back against mounting pressures on immigrants living here. In March, more than 100 young people marched through the University of Georgia campus opposing a Board of Regents policy banning undocumented immigrants from attending UGA. Several weeks ago, Pulitzer Prize-winning novelist Junot Diaz focused his entire interview with Stephen Colbert on celebrating Athens’ Freedom University, spotlighting the efforts of Georgia’s undocumented youth and UGA faculty and students to address barriers to post-secondary education.

Most recently, more than 250 people attended DREAMFest on Saturday, Apr. 20 at Clarke Middle School. The event featured a powerful group of speakers, including the director of Georgia’s ACLU, Azadeh Shahshahani; one of Georgia’s first Latino state representatives, Pedro Marin; Freedom University teachers and students; leading immigration lawyers in the state; a recently formed UGA student solidarity group called the Undocumented Student Alliance; and leaders from community groups in Athens such as the Athens Latino Center for Education and Services.

The organizers of the event themselves were as impressive as the large attendance and high-caliber array of panelists. The event was put on by the DREAMTeam, a group of Clarke Central High School students who work to advocate for immigration reform and to support their undocumented peers. DREAMFest was made possible, in part, through the help of the Bezos Family Foundation’s Bezos Scholars Program, a leadership development program which selects students and their teachers to attend the Aspen Ideas Festival and challenges them to create their own Local Ideas Festival. Clarke Central High School senior Dory MacMillan was selected as a Bezos Scholar and attended the Aspen Ideas Festival with the Clarke Central English Department chairman, Ian Altman, last June.

Passionate about immigration issues, MacMillan and Altman, with the help of the DREAMTeam and other immigrant rights organizations, were able to bring Athens its own Local Ideas Festival, adding to the growing buzz of national recognition that our city is at the forefront of work on the pressing issues of immigration reform.

A testament to the power of seemingly small local actions generating momentum, MacMillan said that she was inspired to become an advocate for immigrant rights after attending an immigration and education forum sponsored by UGA’s College of Education in October 2011.

Unfortunately, if you look at state leadership in a national context, you’d likely have just the opposite impression. As national sentiment seems to be moving steadily towards addressing the travesty of at least 11 million souls living and working on unnecessarily dangerous and unjust margins of society, the Georgia legislature, Gov. Nathan Deal and the University System Board of Regents continue with anti-immigrant policies intended to make life harsher and more unbearable for nearly half a million folks in Georgia who don’t have their immigration papers in order.

As the nation seems poised to take historic action to remedy the ills of its production of and reliance on an undocumented immigrant underclass, Georgia officials seem dead-set on positioning the state in a role frighteningly parallel to the one George Wallace and Eugene “Bull” Connor staged for Alabama 50 years ago under the bitter, cornered snarl of “Segregation today, segregation tomorrow, segregation forever!”

For example, after the Obama administration implemented its Deferred Action for Childhood Arrivals policy earlier this year in an attempt to assuage some of the desperation faced by undocumented young people graduating from our secondary schools, the Board of Regents quickly moved to alter the wording of its ban on undocumented students at the five most competitive public universities to make sure the federal initiative would not have its intended affect. Like Alabama’s legislative attempts in the 1950s to circumvent the Brown decision’s requirement to desegregate schools, Georgia leaders are scrambling to defend intolerant and hostile policies directed at young people whom we have reared and educated here in Georgia, who face overwhelming obstacles to establishing an adulthood with stability and dignity in the only country they have ever really known.

DREAMFest featured powerful testimony by undocumented students from Cedar Shoals and Clarke Central high schools about the effects of recent anti-immigrant laws and policies in Georgia, such as the Arizona copy-cat legislation—House Bill 87—and Board of Regents policy 4.1.6, which bans undocumented students from the five most selective public colleges and universities, including UGA. But the event also demonstrated the negative effects of these policies on the community as a whole, something the student organizers seemed to understand clearly.

“As a citizen, I disagree with the [anti-immigrant] laws and policies, but I think that also, as a student, I realize that they negatively impact me,“ MacMillan said. “My experiences with my peers are some of the reasons my education has been meaningful. The idea that [undocumented] students could be excluded not only hurts them, but hurts us, the students who are still eligible to go to the [five most selective] universities.”

MacMillan’s sophisticated position echoes a speech given by W.E.B. Du Bois late in his life at the dawning of the Civil Rights movement. Addressing more than 800 black and white members of the Southern Youth Legislature in Columbia, SC, Du Bois said, “White youth in the South is peculiarly frustrated. There is not a single great ideal which they can express or aspire to that does not bring them into flat contradiction”  with the institutional inequality and injustice experienced by their peers.

Many of the local participants at DREAMFest shared the experience of hearing from UGA administrators that the flagship university’s hands were tied in regards to the Board of Regents ban. UGA’s largest faculty and student government organizations, including the University Council, the Franklin College Faculty Senate, the College of Education faculty organization, the Student Government Association and the Graduate Student Association, among other campus bodies, have all passed resolutions stating opposition to the ban. But so far, the administration has not taken a public stand about the detrimental affects of the policy on the educational environment, the reputation of the institution and broader community relations. Maybe university leaders could take a cue from Clarke County high school students and use their clout to emphasize this point.

The question is not whether UGA will continue to enforce the BOR policy, which it is compelled to do, but whether the university can follow the courageous leadership of its students, faculty and the Athens community to formally and publicly disclaim the the policy and its affect on the reputation of the university.

The success of initiatives like the one organized by Clarke Central’s DREAMTeam depends in part on “a much larger movement, nationally but also locally, in support of these students,” MacMillan said. But the pressure to achieve historic institutional changes like the 1964 Civil Rights Act also arises from the swarming rise of everyday folks to address injustice, a point made abundantly clear in Martin Luther King Jr’s Why We Can’t Wait, which gives a detailed account of the day-to-day work of building a social movement that can achieve institutional change.

Two years ago, in a bitter irony, UGA celebrated 50 years of desegregation just as the Board of Regents established the ban on undocumented students and the state legislature began escalating anti-immigrant rhetoric and legislation. This spring marks the 50th anniversary of the nonviolent strategies of Project C in Birmingham that broke the back of segregation by staging a confrontation that unequivocally exposed the plight of the nation’s 20 million African-Americans. As national leaders seem poised in the threshold of another historic juncture, it’s worth recognizing the crucial role of a rising movement for immigrant justice sustained by courageous local groups like Clarke Central’s DREAMteam in getting our leaders to address the plight of 11 million among us who have been pushed into the shadows for much too long.