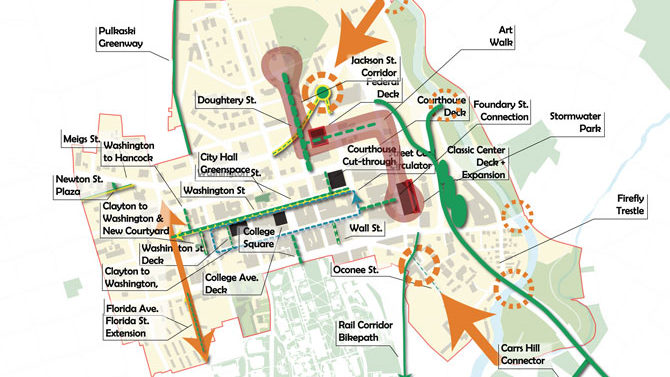 The downtown Athens master plan is coming together, and most people seem to like it so far—at least out of the 150 or so who attended a public hearing at the Classic Center Thursday, Apr. 25.

But that’s just a small fraction of the number of people who care about the future of downtown, so here’s a guide to what’s in the plan and how to make your voice heard. Allow us to explain the confusing jumble of dashes and arrows at the top of the page. (View the entire presentation PDF here)

The biggest single project in the plan is converting a little-used Norfolk-Southern freight line running along East Campus Road through the University of Georgia campus. University of Georgia professor Jack Crowley, who is in charge of the master plan, recommended pushing the state Department of Transportation to buy the entire line from Commerce to Madison for an estimated $70 million to $80 million, but his proposal focuses on a 4.4 mile stretch between the Multimodal Transportation Center and the State Botanical Garden, with eight stops in between. With upgrades, light rail could transport students between East Campus and North Campus, professors from their cars to their classrooms and football fans from downtown to Sanford Stadium and back. Bike and walking trails could run beside it.

It was the most popular idea in the plan, winning 94 percent approval from an audience of about 150 that voted on touch-screen pads.

“This is what we need,” attendee Randall Abney said. “It almost makes too much sense for anyone to do.”

Numerous other pedestrian-oriented projects are included in the plan. Trestles along the future Firefly Trail rails-to-trails project between Dudley Park and the bypass would be rebuilt, creating a level path from the Eastside to downtown. Another path would link Carr’s Hill to the rail-trail.

Other greenway plans already on the books would tie together the North Oconee River Greenway, the Oconee Steet park-and-ride lot, Firefly Trail and East Athens Community Park. “It’s a commuter issue,” Crowley said. “It taps into the whole east side of Athens.”

Another proposal would take city-owned land on the east side of Jackson Street—now surface parking lots—use some of it for a new 50-foot-wide linear park connecting downtown to the Lyndon House Arts Center and Lay Park, and lease the rest to develop as small stores and art studios.

“People can get (to the Lyndon House and Lay Park) now as a pedestrian, but they’re not drawn to it,” said Jennifer Martin Lewis, another attendee. “It seems very far away when you’re downtown.”

Brent Buice, a Newtown resident and executive director of Georgia Bikes!, said cyclists and pedestrians need connections between North Athens and downtown. “That’s a natural corridor for encouraging that type of transportation,” he said.

But College Avenue has an intimidating hill, Pulaski Street is “dysfunctional” and should be one-way with a pedestrian and bike path, and the Pulaski Creek Greenway that’s in the works ends at dangerous Dougherty Street, Buice said.

One thing that’s not an option, though, is closing College Square to cars. It wasn’t in the plan shown Thursday. “That’s a dicey issue,” Crowley said, because, whether it’s perception or reality, retailers believe the loss of on-street parking would kill their businesses. He did recommend removing one lane to widen the sidewalk on The Grill’s side of the street and said a new pocket park and plaza on the City Hall block could serve the same function as a pedestrians-only College Square.

In addition to bike and pedestrian connectivity, Crowley said he’s often asked where is the family-friendly space downtown?

And so the master plan proposes ripping out a parking lot next to City Hall and replacing it with a pocket park. Another city-owned lot next to the yellow (currently vacant) Costa Building would be leased to a developer for a new building and a plaza, providing a gathering place for family-oriented events.

Unlike most proposals in the master plan, this one already has funding. ACC set aside $1 million in SPLOST 2005 funds to redo the City Hall block, but commissioners could not agree on whether to remove on-street parking, so it was put on hold.

The master plan calls for replacing a lane of traffic on Washington Street with a wider sidewalk. Bus bays would be removed and replaced with diagonal parking, resulting in a net gain of 17 spaces, Crowley said.

Dougherty Street would get a makeover, with a roundabout at its intersection with Thomas Street and a median that would slow traffic and provide a refuge for pedestrians crossing it.

All this new infrastructure is going to bring more development downtown, in addition to several apartment buildings already coming up, and yes, new residents are going to need places to park. In addition, Crowley noted that, while the Classic Center has been expanded, its parking deck wasn’t, creating a need for 500 spaces for convention-goers. He proposed offices and apartments wrapped around a parking deck on the surface lot behind the federal building. Based on the audience’s comments, that idea didn’t go over too well. One person suggested selling “I Like Big Decks” T-shirts to raise money.

Traffic flow in and out of downtown is also addressed in the plan. Meigs Street would be converted to one-way toward downtown, and the block of Newton Street near Prince Avenue would be closed and converted into an outdoor cafe, eliminating dangerous left turns from Prince onto Meigs and Newton onto Prince. Florida Avenue would be realigned to connect to Pulaski Street, creating a new connection to campus that was lost when part of Hull Street was closed to make way for the Special Collections Library.

But Crowley punted when it came to fixing West Broad Street and Prince Avenue. They need their own studies, he said.

Several sources of funding could be tapped to pay for actually putting what’s in the master plan on the ground.

One is sales taxes. About $43 million is set aside for downtown infrastructure in the current round of SPLOST, which runs until 2020. Some of that money could be directed toward projects in the master plan, and so could money from future SPLOSTs. (The plan will guide development through 2030.)

Another source could be a TAD, or tax allocation district. Revenue from increased property tax collections due to new development would be earmarked for infrastructure within downtown, rather than put into the general fund. A TAD in the eastern part of downtown could pay back a $20 million bond in about 15 years, Crowley said. The drawback is the extra revenue wouldn’t be available for services like education.

But Crowley urged local officials to act fast, before tax assessors set property values on developing land Jan. 1. “I would highly recommend you really take a serious look, and soon,” at a TAD, he said.

The next step is to submit the final plan in June to a steering committee appointed by the Athens Downtown Development Authority. It will then go to the ADDA board, the ACC Planning Commission and the ACC Commission to be adopted.

If you didn’t make it to the public hearing, comments are still being accepted at www.downtownmasterplan.wordpress.com. “Up until the very day the city commission hopefully adopts the plan, we’re open to comments,” Crowley said.