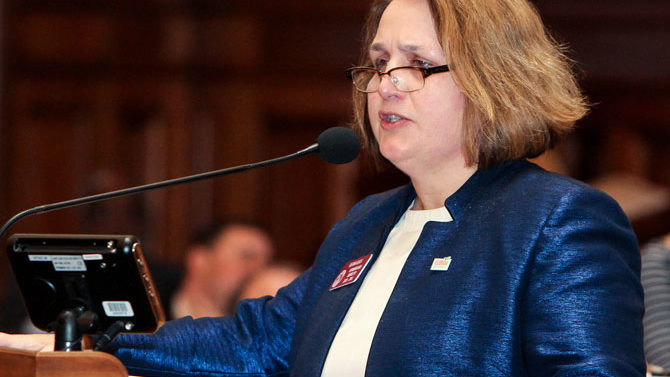 Kelli Persons sees the silver lining in an ethics reform bill hashed out on Mar. 28, the last day of the Georgia General Assembly’s 2013 session.

Spurred on by primary ballot questions last July that showed more than 80 percent of voters in both parties supported limiting lobbyists’ largesse, the legislature finally reigned in wining and dining under the Gold Dome.

Persons, program manager for the League of Women Voters of Georgia, was part of the Georgia Ethics Reform Alliance, a group that pushed hard for a $100 cap on lobbyists’ gifts to lawmakers. She got at least part of her wish. In a compromise between the state Senate, which passed the $100 cap, and House Speaker David Ralston, who switched from opposing any limit to favoring a total ban, both chambers agreed to a $75 cap.

Although the bill includes just three of the 20 points in the alliance’s plan, “it’s a step in the right direction,” Persons said.

There are things to like about the bill: It is a cap, however weak. It doesn’t include a provision Ralston originally proposed that would have required ordinary citizens to pay a $300 fee to register as lobbyists to speak to representatives other than their own.

But the bill is not as strong as reform advocates would have liked. The $75 cap is “per occurrence,” which they read as limiting the value of a gift, but not the number of gifts. So, lobbyists could buy a lawmaker three $75 meals in a day, or a group of them could pool their money for a more expensive gift.

It will also be easy to skirt, according to University of Georgia political science professor Charles Bullock. “Maybe the money that would have been spent on meals gets put in a campaign kitty,” he said. Or, “a lobbyist could bring a legislator to dinner with a friend, and the friend could pick up the tab. They’d be within the law.”

Questions remain about whether lawyers will be  required under the bill to register as lobbyists and report expenditures. Travel within the U.S. is exempt from the cap, as are dinners for groups like committees and caucuses.

Persons is hoping for another bite at the apple next year. “I’m glad we were able to pass a piece of ethics reform, but this is the just the tip of the iceberg for us,” she said. Both Ralston and Sen. Jeff Mullis (R-Chickamauga), who sponsored House Bill 143 in the Senate, have said they’re willing to take another look at it.

Rep. Spencer Frye (D-Athens) wants to give the new rules a chance to work. “This is the first time in the history of Georgia we’ve had a cap on lobbyist spending,” he said. “It’s a step in the right direction. We’ll see the effects and [see] if we need to address it in a future session.”

But that’s not going to happen, according to one longtime political observer. Among the public as a whole, ethics isn’t that big of an issue. An Insider Advantage poll last week found that 15 percent of voters approve of the bill, 20 percent disapprove and 65 percent don’t have an opinion.

“To the public, this simply is not the burning issue that it is to the media and other interest groups,” Insider Advantage CEO Matt Towery told Morris News Service. “And by the tepid response, I can say that it is not only unlikely, but there is no chance that another ethics bill will be taken up by the legislative leadership next year. It just is too complicated and is not a burning issue with constituents.”

Bullock agrees—unless there’s a major scandal like the affair with a lobbyist that felled former House Speaker Glenn Richardson in 2010. “They take an attitude that, ‘We’re done with that; let’s see how it plays out before we bring it up again,'” Bullock said.

The debate itself clearly had a chilling effect on lobbyist spending. Lobbyists submitted 8,134 spending reports to the Georgia Government Transparency and Campaign Finance Commission as of mid-March—the most recent reports available—down by two-thirds since last year, and had spent $766,578, compared to $1.4 million in 2012 and $1.8 million in 2011. Since the legislature’s in session from January through late March or early April, most gifts are given then.

The reduction was partly due to Senate rules passed in January that prohibited senators from accepting gifts of more than $100. “Our rules did have an impact,” said Sen. Frank Ginn (R-Danielsville).

Members of the Athens delegation accepted far fewer gifts than in past years. For example, Sen. Bill Cowsert (R-Athens), who racked up $3,195 worth of freebies in 2009, accepted just two gifts this year, one of them a $13.50 tie from Children’s Healthcare of Atlanta. His share of the cost of a reception hosted by the lobbying group Fiveash-Stanley, who represent bankers, beer wholesalers, AT&T, a natural gas company and construction and real estate groups, was $12.23.

Rep. Chuck Williams (R-Athens) accepted $791 worth of gifts this session. The most expensive was a $61 dinner from the Georgia Bankers Association in February. Williams is a banker but doesn’t serve on the House Banks and Banking Committee.

Ginn accepted 33 gifts worth $892, mostly inexpensive meals. But two dinners paid for by a management company and lobbyists for the health care industry would have topped the $75 cap, had it been in effect. The University System of Georgia reported spending $1,395 to take Ginn to the Capitol One Bowl Jan. 1, but later removed that expenditure from its forms.

“I paid the university for the trip,” Ginn said. “How they disclosed it, I don’t know.”

Quick ran on ethics reform and pledged not to take anything from lobbyists. She almost kept her word—she attended a $24 Athens-Oconee chamber of commerce luncheon, took four circus tickets from influential lawyer and lobbyist Boyd Pettit worth $15 each (they were offered to every legislator) and accepted a $7 scarf from Childrens’ Healthcare of Atlanta.

Frye, like Quick, was among the 49 lawmakers and candidates who signed a Georgia Alliance for Ethics Reform pledge to support a $100 lobbyist gift cap. His gifts—five meals and a CHOA tie—totaled $175.

All five members of the Athens delegation voted in favor of the bill. In all, only two legislators, Sen. Bill Heath (R-Bremen) and Rep. Rusty Kidd (I-Milledgeville) opposed it.

Now all it needs is Gov. Nathan Deal’s signature. He’s had his own ethics run-ins—allegations that he and his friends profited from state salvage business, state land deals and his campaign’s plane, for example—but since he brokered the House-Senate compromise, there’s no reason to think he won’t sign it into law.