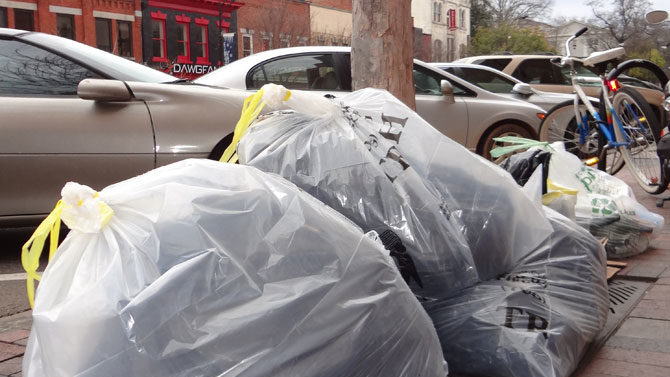 You’re walking down Clayton Street on a hot summer morning and it hits: a nauseating mixture of stale beer and Lord knows what else wafting up from the sidewalk. For years, visitors, business owners and even Athens-Clarke County officials have griped about litter and odor downtown. Everyone knows it’s a problem, but there’s no easy solution. Perhaps, though, the most serious effort yet to clean it up is getting underway.

Source of the Stench

What ACC Auditor John Wolfe, assigned to study downtown issues last year, detailed in a recent report will surprise no one: “Observations indicated multiple violations of ACC’s litter ordinance, including discarded cigarette butts, broken glass in public planters, other refuse on sidewalks and streets, and the use of glass in sidewalk cafés. In addition, instances of what appeared to be leakage from trash bags and other refuse containers onto the sidewalks and streets of downtown were noted.”

In other words, people are flicking smokes and dropping food and beer bottles all over the place, and when they do throw things away, disgusting garbage juice is leaking out of the bags. People even litter with impunity in front of police, says Tommy Houseman, a management analyst in Wolfe’s office. “It may be a low-level priority for [officers], but it happened pretty frequently,” he says.

Even the extra-thick bags the ACC Solid Waste Department sells to downtown businesses will leak if left out long enough, and even though Solid Waste collects downtown trash three times a day, bags sometimes sit on sidewalks for hours because there are few alleys to store trash cans. The city tried Dumpsters years ago and has, from time to time, considered bringing them back, but the idea is always rejected because they’re an eyesore and take up valuable parking space.

“Frequently, the refuse, beer and liquor gunk, isn’t being stored properly,” Houseman says. “That’s where the smell is coming from—the trash. So, we think it’s an education and enforcement issue.”

Anything that spills or leaks onto the streets tends to stay there, too. Liquids pool in potholes or drip through cracks into 100-year-old storm drains, where it stagnates. “The streets and sidewalks are so screwed up,” says Paul DeGeorge, who owns the bars Paulie’s and Magnolias. “They hold everything, and it doesn’t drain. That’s the source of a lot of the odor problem.”

Plus, there are more people downtown to pick up after. The University of Georgia has grown, and the Classic Center is bringing in more and more visitors. Wolfe notes in his audit that the number of bars and restaurants downtown spiked from 84 to 124 in the past decade.

“It’s hard to keep downtown clean because you have such an influx of pedestrian traffic during those evening hours,” Wolfe says.

Tony Arnold, owner of Jackson Street Books, has been dealing with the aftermath of others’ late nights out on the town for 22 years, even starting a Facebook page to document the carnage drinkers wreak in front of his business. While downtown retailers are often at odds with nighttime businesses, this isn’t one of those issues, though.

“It’s hard to point fingers at bars and restaurants when their patrons are walking three blocks and puking up their refried beans,” Arnold says. “On the other hand, the law offices and merchants aren’t responsible, either.”

The ACC Solid Waste Department, for its part, has in years past requested additional litter technicians to supplement the two full-time and two part-time workers who clean up a 30-block area from 5 a.m.–2 p.m. seven days a week, but the commission has not approved those requests. “There were just no funds,” Solid Waste Director Jim Corley says. “It’s unfortunate we’ve been in this budget crunch since 2008.”

Wolfe recommends hiring additional litter techs—something business owners also think would be a big help. DeGeorge calls for a “New Orleans-style cleanup crew” downtown, and Arnold has similar ideas. “Throwing money at it is everybody’s first reaction,” Arnold says. “Whether it’s the [Athens Downtown Development Authority] or Solid Waste, putting some people on it would probably help solve the problem.”

But who would pay for it? Unlike trash collection, the $154,000 a year for litter techs comes out of the general fund—the sales and property taxes everyone pays. Arnold suggests that UGA kick in some money, since their students and alumni are responsible for much of the mess. Mayor Nancy Denson is floating the idea of charging businesses more to rent sidewalk cafés.

The ADDA could also use part of the extra one mill in taxes downtown property owners pay for increased services, but ADDA board member and downtown lawyer Bill Overend doesn’t think business owners would be willing to pay extra. “The feeling among the downtown merchants is there is a large amount of sales tax coming from this particular area,” he says. “The sense is they’re not getting back what they put in or what gets put in.”

Some of those sales taxes will be going toward a downtown streetscape project this summer. The $7 million project will include repaving sidewalks and installing new water lines, sewers and storm drains on East Clayton, North Jackson and Wall streets—generally regarded as the dirtiest part of downtown. “I do truly believe that could be of some assistance on the odor issue,” says ACC Manager Alan Reddish.

Business and property owners will have to step it up, too. Outdoor cafés exploded in popularity after the commission banned smoking inside in 2005. Some cities require businesses to sweep gutters in addition to sidewalks, Wolfe says. His audit also recommends enforcing for the first time laws requiring bars and restaurants that operate sidewalk cafés to keep them clean. For instance, most establishments ignore a ban on glass in sidewalk cafés. “The reason [the law was passed] was, of course, a safety issue, people getting cut, but also broken glass is harder to clean up than a plastic cup,” says Commissioner Jared Bailey, a former bar owner.

But drinking out of a Solo cup doesn’t appeal to Commissioner Kathy Hoard. “I can’t see paying $20, $25 for a nice dinner and getting a bottle of wine and being served in a plastic cup,” she says.

One thing the local government can’t do is pressure-wash—it’s illegal. “Even if you’re using rainwater, you’re taking all the particles and washing them down the drain,” Corley says. “You have to have a way to collect all the water, and that’s extremely expensive.”

At a meeting earlier this month, the commission’s Audit Committee punted to the ADDA, which has been discussing possible solutions for over a year. ADDA board member Brian Brodrick told the committee, “We realize, same as you do, that this is a critical issue for downtown.”