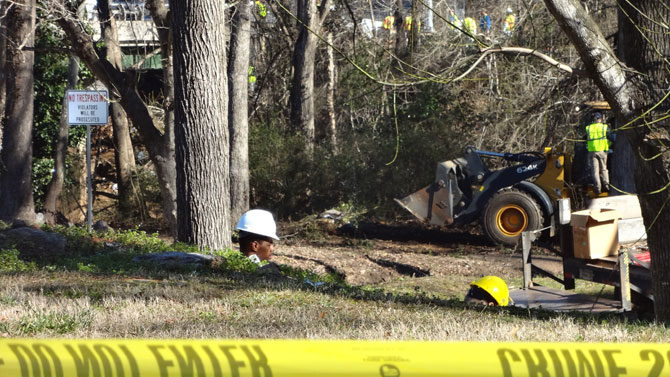 A camp underneath the North Avenue bridge in 2020. Credit: Adria Carpenter
by Blake Aued February 13, 2013

About a dozen people who lived under the North Avenue bridge are homeless—again.

For years, homeless people have camped underneath the bridge crossing the North Oconee River. After a late-night argument with two roommates on Jan. 29, police say Carol Rayeanne Childers-Queen, 43, lit a boot on fire and threw it at a mattress. The blaze spread. Flames reached to the underside of the bridge, rupturing a gas line in her home’s ceiling, according to police. Everything under the bridge on the river’s east bank was destroyed.

The following week—after giving residents and homeless advocates notice to clear out any remaining belongings—police sealed off the area underneath bridge and cleared out whatever was left. They found coolers, bikes, tables, chairs and bedding—some burned, some intact. “There were items you would normally find in a home,” Athens-Clarke Police Chief Jack Lumpkin said.

The night of the fire, police took the 10 or 15 people living under the bridge across the street to the Bigger Vision shelter at the corner of North Avenue and Willow Street. They had lost what little home they had, but the shelter isn’t a permanent solution. As with most nights when the weather is bad, its 35 beds were already taken. “We had a full house,” said Barbara Andersen, 80, who co-founded the shelter at a different location 15 years ago with her late husband, Richard.

“They stayed downstairs [in the kitchen], on tables or on the floor,” Andersen said. “We had blankets but no mats, but at least they were in the warmth. It was a nasty night.”

Not all homeless people want to stay in a shelter. Many chafe at the rules—lights out early, waking up early, no drugs or drinking. Some are addicted. Some are mentally ill. “Some of them don’t want to be in a shelter,” Lumpkin said. “You can’t force them to, really.”

People staying at Bigger Vision last week said many of the bridge-dwellers had scattered. Many of them moved to other spots on the North Oconee River Greenway or somewhere else in the woods. “Some of them went out to the country,” said one person at the shelter. “People came and picked them up. A few of them came here. Different places.”

Even if some people live outdoors by choice, many have no choice. Athens-Clarke County and nonprofit social workers visit known camps, shelters, soup kitchens and other places homeless people gather on one day in late January each year to count as many as they can. This year’s findings haven’t been released yet, but they usually find about 500, and the majority have nowhere to go. Athens doesn’t have enough shelter beds for even half.

Bigger Vision expanded last year, moving into a permanent home in a former warehouse after years of moving around among various churches. They’re at capacity almost every night, Andersen said.

“Somebody needs to step up and give [Andersen] a bigger building,” said Michael Durr, who added that he’s thankful for the place to stay. “She’s only one person. There’s only so much she can do. And if somebody did, what happened under the bridge wouldn’t have happened, because nobody would’ve been under that bridge.”

For a decade, police left the people under the bridge alone; they generally didn’t bother anyone. But now a “no trespassing” sign is posted there, and for safety reasons, officers plan on removing anyone who sets up camp.

Police worked with nonprofits to find other living arrangements for bridge residents, and some are transitioning into apartments, Lumpkin said. But police had no choice but to clear folks out from under the bridge, he said. The fire could have knocked out power in wide swaths of Clarke and Madison counties or sparked an explosion that destroyed the bridge—not to mention anyone driving or walking on it at the time, he said.