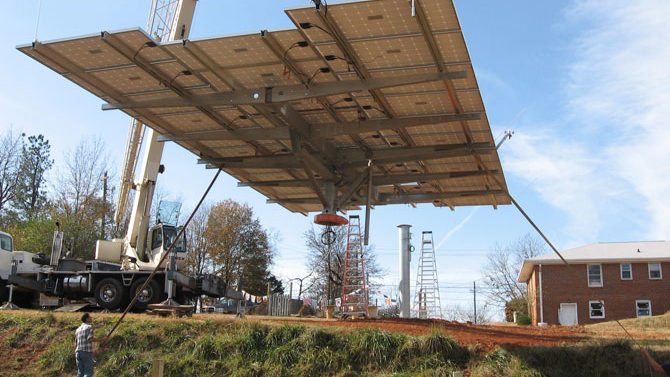 Athens Montessori School has always been about as green as they’ve come. It has low-flow toilets and energy-efficient light bulbs, won recycling awards and uses well water to irrigate its athletic fields.

Last week, the 290-student private elementary and middle school on Barnett Shoals Road took another step toward sustainability, installing three massive solar panels on its property, allowing it to generate its own electricity when the sun is out, rather than use power mostly from dirty-burning coal.

“It’s part of our total plan to be environmentally conscientious, to be conservation conscientious and to take advantage of sunny Georgia,” Director Warren McPherson says. 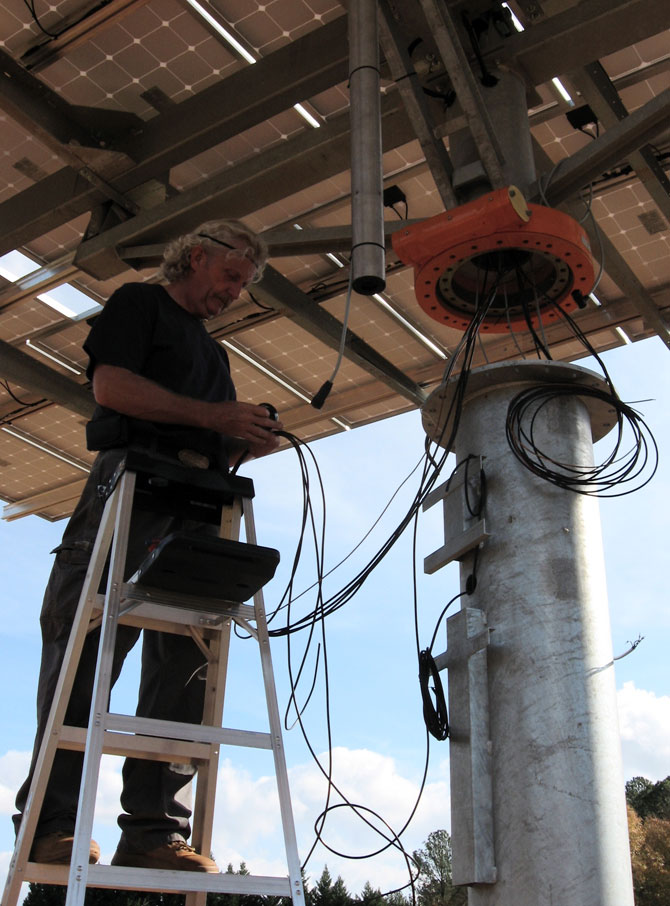 The 32-cell silicon panels generate about 17,000 kilowatt hours per month, according to Josef Kullmann, president of Solar Sun World, the company that installed them. That’s enough to power six of the school’s seven buildings on a sunny day. When it’s cloudy and at night, the school runs on ordinary electricity. On weekends and during the summer, when the school’s not in use, the excess solar electricity is sold to Georgia Power and put on the grid.

The state Public Service Commission recently raised the rate Georgia Power will pay customers who put solar energy on the grid from five cents per kilowatt hour to 12, which is expected to increase the state’s production from 50 megawatt hours to 260, says Athens’ representative on the PSC, Tim Echols, a longtime advocate for solar power who has a sun-powered water heater at his Winterville home. The new policy means Georgia will produce more solar energy than any state that doesn’t have a mandate to produce a certain amount, he says.

“Not only are they saving money, but their efforts help all of us by reducing the overall need for power,” says Echols, a Republican and the PSC’s chairman this year. “Solar and other renewable sources are great efficiency measures, and we will continue to see them gain popularity as they come down in price.”

Athens Montessori paid for the $180,000 panels by refinancing a mortgage with a lower interest rate. Combined with lower power bills, McPherson says the school can pay off the panels in six years. They have a 20-year warranty and could last for twice that long, he says.

The solar array also has educational value. It’s hooked up to students’ computers, so they can see how much electricity is being generated and calculate the value, McPherson says.

It also boosts the state’s economy, he says. Georgia, where the sun shines an average of five-and-a-half hours per day, has a booming solar industry. The panels were manufactured by a company called Suniva in Norcross, and Solar Sun World is based in Madison. The crane that lifted them was also local.

McPherson believes that Athens Montessori is the first school in Georgia to go solar and hopes the example will inspire other schools, as well as homeowners, to install their own panels. Homeowners, unlike schools, can get state and federal tax credits, making solar panels even more affordable in the long run.

“In the interests of conservation, I want everyone who can afford to to jump over to solar,” McPherson says.

Other schools have solar panels, according to Echols, but Athens Montessori may be the first with the capacity to generate all of its power that way. “That’s pretty unique,” he says. “[Other schools] must put up enough [panels] to cut into the power they’re using, but they’re not getting all of their power from solar.”