Crime on the Greenway 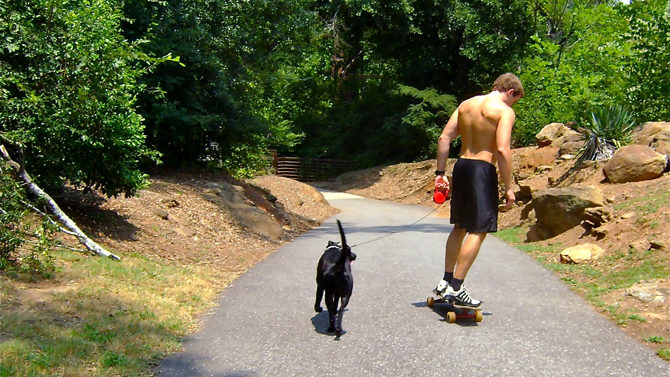 Tanner Copeland, a 22-year-old University of Georgia student, has run between eight and 16 miles on the North Oconee Greenway, four days a week for the past four months. His route takes him from Dudley Park to Willow Street to the North Avenue bridge and beyond.

“Do I feel safe? As far as from people, yes,” he says. “Honestly, though, from a safety stand point, they need more water fountains along the trail.”

A career criminal who stands accused of beating a woman and hiding in the woods near the North Oconee River Greenway last month isn’t stopping regular Greenway users like Copeland from hitting the trails.

Athens-Clarke police arrested Samuel Tyrone Evans, 51, on June 21 after a daylong search in the woods between Willow Street and the North Oconee River.

Evans assaulted a woman in a College Avenue parking lot after she came upon him breaking into her car, then fled to the woods after a witness pulled a gun on him and threatened to shoot, police say.

Evans is the second person arrested near the Greenway since it opened in 2003. Gary Gaylord Ford, 42, is currently standing trial on charges of sexually assaulting a woman jogging on the Greenway in 2008.

Tyler Brewton, a 20-year-old UGA senior, had not heard about Evans or Ford, although he runs two miles along Greenway twice a week.

â€œIt does give me pause,â€ says the 6-foot, 2-inch, 200-pound Brewton. â€œIf I was smaller, I probably would be a little more worried, if I couldnâ€™t defend myself.â€

Odd Street resident Sarah Johnson, 25, walks her and her boyfriendâ€™s two dogs along the Greenway in Dudley Park. She is a bit more cautious.

â€œI sometimes run into a few strange people who, I feel, might be creeping or would say strange stuff to you,â€ she said.

Jesse Kuzy, who lives off North Avenue, told Athens-Clarke commissioners at a meeting last week that he sees homeless people, drug dealers and prostitutes congregating near the Greenway. He says he worries about being mugged when he walks by on his way downtown or to UGA.

But Copeland and Johnson, like many other Greenway regulars, say they do not find it any more or less safe than most other parts of Athens.

â€œFor instance, I drive to downtown,” Johnson says. “I donâ€™t walk there alone.”

When Athens-Clarke County built the Greenway years ago, critics believed it would breed crime, according to Mel Cochran, Greenway coordinator for the county’s Leisure Services Department. The criticisms just aren’t true, she says.

People who worry about crime near the Greenway tend to focus on the homeless people that gather under the North Avenue bridge, as well as rumored drug use and prostitution in the area, Cochran says.

“It is very true that Athens is multi-layered with some good, some bad, some ugly,” Athens-Clarke Commissioner Kelly Girtz says. “As you move closer to North Avenue and downtown, there’s more of the crime and social dysphoria that everyone is familiar with.”

Carolyn Kean, a 51-year-old Odd Street resident, has walked her dog along the Greenway four times a week for the past three years. She sticks to the trails around Dudley Park and tends to avoid parts of the trail closer to North Avenue.

“There are all these people hanging around there. Unsavory people,” she says.

Still, in spite of a few high-profile crimes, the Greenway doesn’t attract illicit behavior, Girtz says. National reports show that public trails tend to have lower crime rates than the neighborhoods that surround them. City planners in Raleigh and Charlotte, NC and Minneapolis, MN have found that the more people use such spaces, the lower the crime rate dropped.

“If you compare it to any other public space it stacks up pretty favorably,” Girtz says. “In my personal sense, I find it comforting that there are lots of people around, generally: families, joggers, people walking their dogs, rollerblading, students. That is certainly what the research says makes for safe public spaceâ€”lots of eyes on the ground.”

In Athens, crime and homelessness near the North Avenue bridge and Willow Street are not just isolated problems near the Greenway, Girtz says.

“The Greenway didn’t bring the issues,” Cochran says. “The problems were there when the Greenway went through. There were people under the North Avenue bridge long before the Greenway was built.”

Leisure Services employees are still prepared for a crime or emergency. They’re equipped with emergency management kits and trained to respond, Cochran says. Eleven emergency call boxes line the trail, though people are more likely to use their cell phones to call police, she says.Â

“We mow back to keep open lines of sight,” she says. “The more people we have out there, the more eyes there are on the ground, the safer it tends to be.”

Cochran urges Greenway users to stay aware of other people, dogs and children and to avoid getting lost in their iPods or headphones while on the trail.

“It’s just like anywhere else, be aware of your surroundings,” she says. “The best advice to be safe is to know where you are going and where you’ll be, and how long youâ€™ll be there.”