The Groundhogs Are Coming 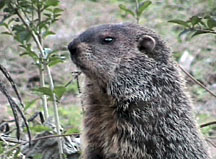 There’s something so endearing about a groundhog. I see them on the medians of the highways – sometimes still on the hoof, sometimes sadly flattened and expired – and I want to take a live one home to keep all my other beasts company. As I’m sure my lovely husband Winston would leave me flat if I brought home anything else with a pulse, and as I’m also sure that any groundhog I brought home would not appreciate his new dog-, cat-, and little-boy-infested digs, I shall leave the groundhogs to their rodenty ways. The good news for us Athenians is that, right here in our fair city, groundhogs are now living and thriving and (praise the Lord) nibbling away at the ubiquitous kudzu even as you read this. According to Athenian Matt Elliott of the Georgia Department of Natural Resources, Wildlife Resources Division, their range has expanded. “They have always been relatively common in the North Georgia mountains, and it appears that they have spread their range south….” Bring it, groundhogs. Bring it on.

Groundhog, woodchuck, whistle pig: fantastic names, all. The scientific name of these new arrivals to Athens is Marmota monax, which has its own badass alliterative charm, but my favorite titular aspect of our new friend and neighbor is this: Sciuridae. That’s the scientific family into which the noble groundhog falls. I like Sciuridae so much. So nearly onomatopoeic (is there a term for something that just sounds like what it is, not what it sounds like?), it just fits, which I love. Other members of this family also boast fantastic monikers: yellow-bellied marmot (sounds cowardly), black-capped marmot (sinister, but with Zorro-esque do-gooding overtones), Alpine marmot (wears Lederhosen and ought to yodel if he doesn’t already), Himalayan marmot (also known as the Tibetan snow pig, a lofty and inspiring title), pocket gopher (a convenient size for travel, although if you say it out loud it sounds dirty), Menzbier’s marmot (who do you have to know to have a sciurid named after you? That’s what I want to know), and – my personal favorite – the hoary marmot (I know it’s just a homophone, but heh heh heh).

The charm of their nomenclature notwithstanding, do not underestimate Marmota monax, or, by extension, any sciurid. Bless their fierce little hearts, they are a force with which to be reckoned, these toothy and feisty little beasties. They do not, however, present any significant risk to people. Which leads me to wonder why on earth Wikipedia saw fit to include in the groundhog’s rap sheet the following, as it seems an invitation to a redneck armed with a golf club to test the statement: “Groundhogs, like other sciurids, have exceptionally dense cerebral bones. These bones make them able to survive direct blows to the head that would cripple other mammals of the same body mass.” Why, Wikipedia, why? It’s just beyond me. I do love this particular tidbit from the New York Times (via Wikipedia), however, as it shores up my assessment of the groundhog as a tough little mofo: “[The groundhog’s] natural impulse is to kill ’em all and let God sort ’em out.“ That bon mot comes from Doug Schwartz, a zookeeper and groundhog trainer (yet another job I covet) at the Staten Island Zoo. Watch yourselves, residents of Boulevard – the locus of most woodchuck-related activity in Athens that I’m aware of – they’re loaded for bear. 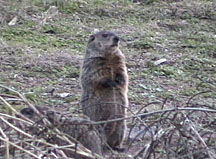 I don’t know which Boulevardier spotted the first groundhog as it raised its densely-boned cranium, but I envy him. They (the groundhogs, not the residents of Boulevard) have a pensive, cranky gaze which I find endearing. One resident of the neighborhood, Mark Johnson, says that they’re no menace at all, more a diverting new neighbor, and that they’ve been in Boulevard for about four years. He seems quite fond of Marmota monax. According to Mark, “My wife is a fanatic gardener… by all accounts, they have done just a bit of dill-munching, but nothing of any real consequence. They are a real trip when they are mating, they chase each other all over and make these great paths on the bank behind our house.” Mark’s wife, Ann Sears, concurs, adding that some juvenile groundhogs have also sampled the cabbages in her garden. She bears them no ill will. In Mark’s priceless photographs of his backyard whistle pigs, they maintain an expression of peevishness I find absurdly charming, mingling as it does an anthropomorphic aura of almost British stiff-upper-lippish restraint with a barely suppressed rage at the goings-on outside the groundhog’s own burrow. I want one for my very own, but I know it cannot be. 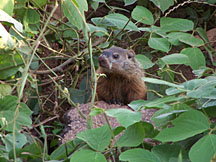 They’re hee-re! But why? According to Elliott, it all comes down to kudzu. “[They’re] following kudzu patches. They love to eat kudzu.” Thank heavens. They’re not particularly dangerous beasts, although he advises that their burrows can be hazardous for livestock, which may step in them. Apparently their honeycombed homes can extend to more than 45 feet of burrows as deep as five feet underground, weakening the surface of the ground. So if you have or are a heavy domestic animal, you might want to gently encourage the groundhogs to relocate to friendlier, less trodden parts. And not with a golf club, please.

Again, according to Elliott, “They can carry rabies [as can any mammal], though a good deal less frequently than raccoons or foxes. I’ve not heard of rabid groundhogs in Georgia, but I know it happens further north in places like Pennsylvania or New Jersey.” Yankee groundhogs, be gone. And, of course, beware the frothing woodchuck. (Yet another sciuridean turn of phrase that – like the pocket gopher – sounds like it needs latex protection to make it safe. Keep your frothing woodchuck far from me!)

As for concerns that we’ll soon be overrun with a seething, furry sea of whistle pigs, fret not, fair fellow Athenians. They seem to stick primarily to the kudzu patches, and who could object to that? Furthermore, they only breed once a year, in the spring. They don’t go totally to ground, as do the hibernating Yankee groundhogs. According to Elliott, the winters here are too mild. They just get sleepy and lazy, a state we can all applaud, regardless of season.

Get Your Groundhog On

If you have a strong yen to observe the whistle pig, please leave your marauding-redneck, golf-club-wielding tendencies at home, follow the advice of Elliott, resident Marmota monax expert, and check out them out “in and around several kudzu patches in the [Boulevard] neighborhood…. I’ve also seen them around the intersection of Highway 441 and the Loop. I don’t believe they are found at all south of town. There, you’ve got armadillos – I see dead ones on the south Loop pretty often.” Armadillos, in my opinion, aren’t worth a sightseeing trip, but the groundhog? Oh yes.

To quote Dr. Seuss, “funny things are everywhere,” and our new sciuridean neighbors offer solid proof of that, but not sole proof. Amusing rodents are everywhere (a sentence nowhere near as charming or universal as the preceding Seussian one). One night, as Winston and I were sitting on our porch sipping wine, a flying squirrel – yet another sciurid! Holla! – climbed out of my mop (which tells you how often I clean my house). To delve a bit further off-topic (off-groundhog? Is that like off-piste, but with fur?), my father was once attacked by a beaver (sadly not a sciurid, but still a member of the mammalian order Rodentia, like our charming groundhog neighbors) as he attempted to save a cat from the beaver’s long-toothed ravagings. My father, the cat and the rapacious beaver were fine, and my father had a fantastic pair of jeans to prove it, too. Cat blood blue jeans. But back to the sciurids: I challenge any of you out there to produce a pair of pocket gopher jeans. Or maybe not. That could get ugly.