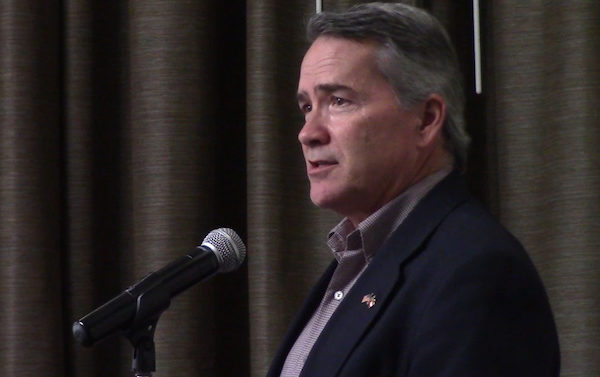 The Athens-Clarke County Democratic Committee is circulating a petition urging Congress to expel Rep. Jody Hice after he led an effort to deny President Joe Biden Georgia’s 16 Electoral College votes, sparking a right-wing insurrection at the Capitol earlier this month.

The ACCDC has already called on Hice, a Greensboro Republican who represents most of Clarke County, to resign.

We, the undersigned, do hereby petition the Committee on House Administration and the Committee on Ethics to investigate Congressman Jody Hice (R-GA 10) to determine if he violated his oath of office to uphold the Constitution or any Rules of the House of Representatives. We call for him to face sanction, up to and including removal from the House of Representatives.

Whereas, Jody Hice voted to overturn the November 3 election results and to nullify the votes of over 35,000 Clarke County voters, of nearly 2,500,000 Georgia voters, and of over 80,000,000 American voters. His actions went beyond protected speech and voting decisions. On the morning of January 6, 2021, Congressman Hice urged supporters to “FIGHT” and stated “This is our 1776 moment” hours before thousands of Trump supporters stormed the US Capitol building in an attempt to overthrow an election, resulting in 5 deaths.

Now, therefore, be it resolved that the actions of Congressman Jody Hice constitute engaging in “insurrection or rebellion.” If he does not resign, he should be investigated and face sanction, up to and including expulsion from the House of Representatives.

In objecting to Georgia’s presidential election results—though not the results of his own re-election—Hice cited conspiracy theories of voter fraud that have been refuted by Republican election officials and thrown out of court even by Trump-appointed judges. He continued with his objection even after the violent mob took over the Capitol for hours and killed a police officer, and then-Sen. Kelly Loeffler withdrew her support.

Those who agree with the petition can sign it here. It will be sent to the House Ethics Committee and the Committee on House Administration.