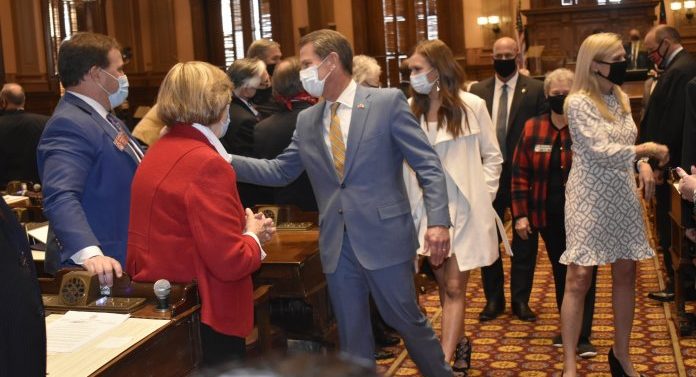 Gov. Brian Kemp’s new spending proposals will undo some of the cuts to public education made last year, attempt to spur economic growth in rural corners of the state and kickstart his health care plan that slightly expands Medicaid.

Public education bore the brunt of the $2.2 billion cuts made last summer, when state budget writers feared the pandemic would decimate revenues. Those revenues are beating expectations, though, and Kemp says his budget will restore much of the cuts to education.

Kemp highlighted his legislative agenda and spending priorities in an hourlong State of the State address delivered Thursday morning to lawmakers who returned this week to the Gold Dome.

His third State of the State was also a reflection on the turmoil that 2020 brought, including a pandemic that has killed nearly 10,600 Georgians and stymied segments of the state’s economy. And it was a defense of the tough calls he had to make as governor. Georgia made national news last year when it was one of the first states to reopen after being one of the last to shut down.

“Other states are looking at further cuts to employees and essential services. For aid, they are now forced to turn to a dysfunctional and distracted Washington D.C.,” Kemp said.

“But because we acted swiftly and early, the budgets my administration will propose in the coming days include no new cuts to state agencies and departments, no furloughs and no widespread layoffs of state employees. And, I might add: no new taxes to pay for it all,” he said to applause.

Kemp also said the nation saw “injustice with our own eyes” when videos captured the murders of Ahmaud Arbery and George Floyd. He announced Thursday that he would pursue “significant reforms” to the state’s Civil War-era citizen’s arrest law.

He also briefly referenced some the political upheaval that made him the subject of scorn from President Donald Trump, who was outraged when Kemp refused to help overturn Georgia’s election. Trump endorsed Kemp in 2018 but has vowed to back a primary opponent in 2022, putting him on shaky ground with the GOP base.

Kemp’s budget proposals will be released later Thursday, but his speech gave him a chance to highlight his priorities:

Kemp’s plan is expected to extend coverage to about 50,000 people if they satisfy a work or activity requirement. Democrats, health care advocates and others have criticized the GOP plan as a missed opportunity to cover hundreds of thousands of uninsured Georgians through full Medicaid expansion under the Affordable Care Act.

Education: $647 million to restore funding to school systems this year. He’s also proposed a one-time $1,000 payment to teachers and other employees.

Broadband: $20 million to provide rural broadband grants this year and $10 million in next year’s budget. The spotty service in rural communities became even more glaring last year as schools turned to virtual learning during the pandemic and workers hunkered down behind their home computer.

Rural Georgia: $40 million for a “rural innovation fund” through the OneGeorgia Authority. The funds would provide “a readily available pool of resources that empowers rural Georgia businesses and entrepreneurs to get started, expand and thrive.”

This story originally appeared in the Georgia Recorder.