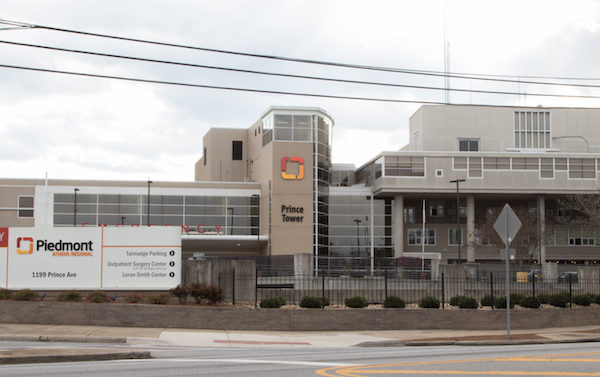 Both Athens hospitals, St. Mary’s and Piedmont Athens Regional, were full on Wednesday and diverting patients to other facilities, according to Athens-Clarke County Commissioner Russell Edwards.

Edwards said he learned about the diversion of patients from two doctors at Athens hospitals. The hospitals, the Georgia Emergency Management Agency and the Georgia Department of Public Health did not respond to Flagpole‘s requests for comment.

“Both local hospitals are on total diversion, meaning they cannot accept any patients,” Edwards said. “They are full, and I fear we are nowhere near the peak of COVID.”

He later clarified that hospitals were not turning people away from the emergency room.

“Typically only one hospital goes on total diversion, refusing patient transfers and ambulances by sending them to the other hospital,” he told Flagpole. “But this afternoon, both hospitals were on total diversion simultaneously, where both were forced to accept and prioritize only emergencies. This strain on the system aggravates the threat of the coronavirus pandemic.”

Edwards said the news is troubling for the region, as 17 counties rely on the two Athens hospitals.

As of Wednesday, GEMA’s official daily status report showed Region E, which includes Athens and surrounding counties, nearly at capacity for critical care beds. Out of the 70 critical care beds available in the region, 63 were in use, and only seven remained available.

Edwards said he disappointed at the inaction of Gov. Brian Kemp in instituting public health policies to help curb the spread of COVID-19. While Athens implemented a county-wide mask mandate in public last week, other surrounding counties have not followed suit.

“We’re not on an island here in Athens,” Edwards said. “People come and go from all the surrounding counties, so no matter what laws we passed locally, their effectiveness is diluted by the fact that there is no statewide policy providing any protection.”

Kemp renewed his executive order today regulating restaurants and other businesses through July 31, but the order only “strongly encourage[s]” wearing a mask. He also explicitly banned local governments from enacting mask ordinances like ones passed in Athens, Atlanta, Savannah, Augusta and other cities.

At least 20 states, including Alabama and Louisiana, mandate face coverings in public. Others, such as Louisiana, Florida and Texas, have re-closed bars, but Georgia’s remain open.

“The real hope,” Edwards said, “is that Gov. Kemp will muster the courage to enact public health laws that studies have proven exhaustively worldwide help prevent the spread of the coronavirus.”

This post has been updated to add additional context.