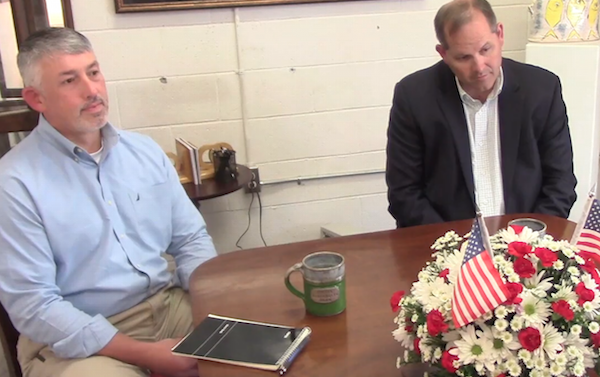 Oconee County sheriff candidates James Hale and Jimmy Williamson said they didn’t want to get involved in a dispute between the School Board and the Board of Commissioners and would continue to provide deputies to direct traffic at school entrances if elected and asked to do so.

At the same time, they said that having deputies in the roadway is dangerous and that they are in favor of road infrastructure changes, including roundabouts, that remove the deputies from the school entrances.

Both said they would be obligated to their deputies to help protect them by getting them out of the roadways when possible.

The Board of Education has tried–with some success–to block construction of roundabouts at the Malcom Bridge school campuses, which the Board of Commissioners has said they have proposed in part to get deputies out of the roadways.

The School Board had said it wanted to wait until after the election in November, when either Hale or Williamson will be chosen to replace retiring Sheriff Scott Berry, and let the new sheriff, rather than the Board of Commissioners, decide about the assignment of deputies to school entrances.

Hale and Williamson were responding to a question posed by Michael Prochaska, editor of The Oconee Enterprise, in a candidate form Prochaska organized for the two candidates who meet in the June 9 Republican Primary.

No Democrat has filed for the office, so the June primary will determine who is Oconee County’s next sheriff.

The two candidates are scheduled to appear at 6:30 p.m. tonight (Monday) in another virtual candidate forum organized by the Oconee County Republican Party.