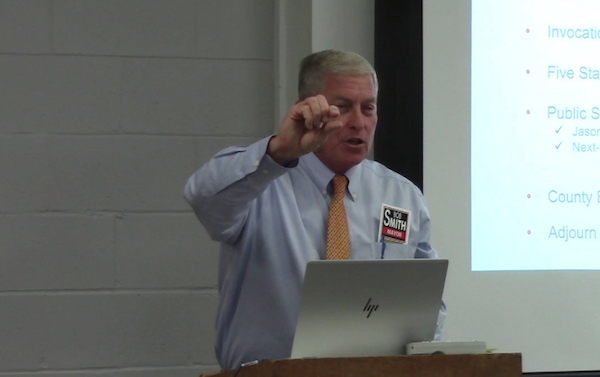 Bob Smith demonstrates how close the race could be.

Democrat Stacey Abrams, who ran unsuccessfully for governor a year ago, is watching the outcome of the mayoral race in Watkinsville, Bob Smith, one of the two candidates in that contest, told Oconee County Republicans last month.

The race is nonpartisan, but Smith made it clear he is running as a Republican and told those gathered they needed to make sure he wins to send a message back to Abrams.

Abrams “has these billionaire socialists pumping money” into her nonprofit voting rights organizations, Jason Thompson, Republican National Committeeman from Georgia, told the same gathering. He told them to take action to thwart her.

The two were lead-off speakers at the Republican Party meeting at the Oconee County Chamber of Commerce in Watkinsville, and they were followed by four women panelists discussing the Next Generation Conservative Women Leaders.

The women didn’t mention Abrams and were less confrontational than the men. One said “that people who vote Democrat have a good heart” and another said “we have to be prepared to embrace” people who are questioning liberal positions.

The Oconee County Republican Party will hold is next meeting at 6:30 p.m. on Oct. 28 to discuss the State of the County with three local elected officials, all of whom are Republicans. That meeting also will be at the Oconee County Chamber of Commerce.

Early voting in the Watkinsville city races, the only ones on the ballot in the county this November, continues at a slow pace, with only 121 of the city’s 2,209 registered voters having cast a ballot by the end of the day on Friday, according to Fran Leathers, director of Elections and Registration for the county.

Georgia Runs Over Kentucky After a Wet, Sloppy First Half