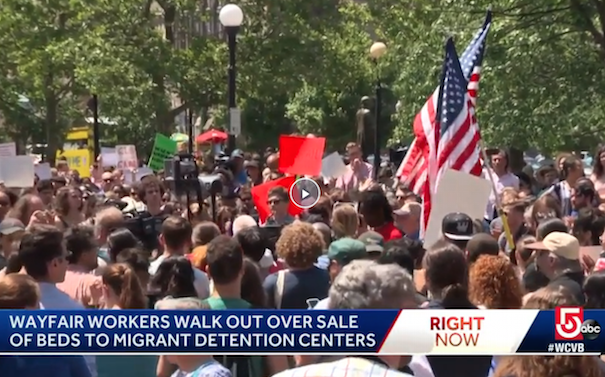 Hundreds of workers at Boston-based online retailer Wayfair walked out earlier today to protest the company’s sale of $200,000 worth of furniture to a contractor that runs migrant detention facilities for the federal government.

Wayfair is opening a call center in Athens next year that will employ 500 people, Athens-Clarke County and state officials announced last week.

Despite the controversy, Mayor Kelly Girtz said he has no regrets about approving up to $60,000 in local incentives for Wayfair to locate in the planned General Time development off Newton Bridge Road.

“I’m still excited about them coming here, but I’m also happy they have employees who are concerned about human rights violations at the border,” Girtz said.

It came to light Tuesday that Wayfair was selling beds for a new Texas detention center for 1,600 minors who arrive unaccompanied at the Mexican border — what many on the left have begun calling concentration camps. Reports have emerged recently of horrific conditions at such facilities.

Employees planned the walkout and demanded that Wayfair stop doing business with the contractor, BCFS. In response to the criticism, the company said it won’t stop filling orders for political reasons, and that it will donate $100,000 to the Red Cross.

Girtz said he supports immigration reform, but there is little the local government can do about national policy.

“We’re a welcoming community, we appreciate our immigrants, and we’re going to treat people humanely within our [city] borders,” he said.

Girtz added that ACC attorneys are looking at “creative opportunities” to ease traffic enforcement against immigrants who are denied driver’s licenses by the state because they lack documentation. Such a proposal could move forward as early as August, he said.

Square One Is Opening, Mirko Is Closed and More Restaurant News