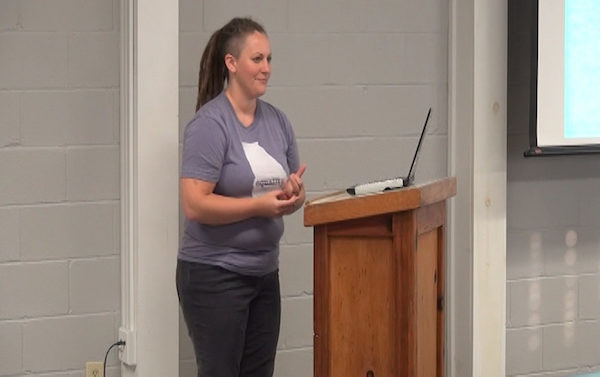 Shannon Clawson, lobbyist for Georgia Equality, told Oconee County Democrats recently that her group had a mixed record during the 2019 Georgia legislative session.

Clawson pointed to passage of a number of bills that she said served the interests of the lesbian, gay, bisexual and transgender communities of the state.

She included among the successes passage of a bill sponsored by Rep. Houston Gaines (R-Athens) making it possible for “syringe services” programs to distribute syringes or needles without civil or criminal liability.

Clawson cited as a serious setback passage of House Bill 481, the so-called “heartbeat bill,” that defines an unborn child as a human being and makes abortion illegal in the state after about six weeks of pregnancy, except in the cases of rape and incest.

Gaines, along with Oconee County’s other representative, Marcus Wiedower, voted for that bill, as did the county’s senator, Bill Cowsert. All are Republicans, and the bill passed the House by only one vote.

Clawson was the featured speaker at the Oconee County Democrat’s monthly meeting.

The group is scheduled to meet at 6:30 p.m. on Thursday at the Oconee County Chamber of Commerce in Watkinsville, where the featured speakers will be Superior Court Judge Lisa Lott and Jimmy Williamson, who has announced his plans to run for Oconee County sheriff.

Catching Up With Hobo Johnson at Bonnaroo