Athens Moms (and Others) Rally to End Gun Violence 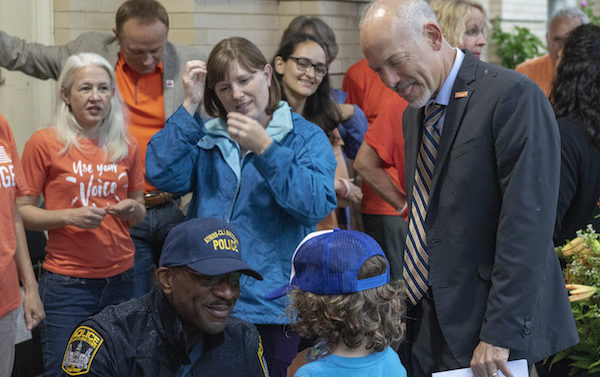 “We wear orange to say we will be seen, we will be heard, we will show up—even when it’s raining—and we will work to end gun violence,” said Emma Jones of Moms Demand Action, which organized the rally.

The group also tried to light up City Hall orange, though as they acknowledged, the coloring wasn’t really visible in the dim light.

Girtz and Spruill outlined actions the city is taking to reduce gun violence, including putting more officers on the street to engage citizens and prevent crime before it happens, seeking harsher penalties against those gang members who use guns to commit crimes, beefing up a unit that deals with suspects who may have mental health issues, conducting outreach on gun safety, participating in active-shooter drills, and lobbying state and local officials for universal background checks and laws that keep guns out of the hands of criminals and the mentally ill.

Girtz noted that the French fries from a nearby fast-food restaurant are more heavily regulated than firearms.

“It’s not about taking your guns away,” said Carolyn Smith, whose son, Clinton Patterson, was shot and during a robbery in 2016 and succumbed to his injuries two weeks later. “It’s about being safe with your guns—protecting yourself and your family.”

Almost 100 people are killed with guns every day, according to Jones. Just last week, a gunman killed 12 people and wounded five others in Virginia Beach, near where Spruill and Girtz grew up and the chief’s son attends college.

In Athens, guns were involved in 246 crimes last year, including 93 aggravated assaults and five deaths, Spruill said. So far this year, five homicides have been committed with guns, and two suspects—one with a realistic air gun and another brandishing a shotgun—”forced our officers to use deadly force to defend their lives,” he said. In addition, a UGA student was shot in the head while waiting for a bus.

“All of these are senseless acts of gun violence,” he said.

Moms Demand Action will host a family-friendly event at Bishop Park from 10:30 a.m.–12:30 p.m. Saturday with snacks, games, yoga, face-painting and other activities. Attendees are asked to wear orange.