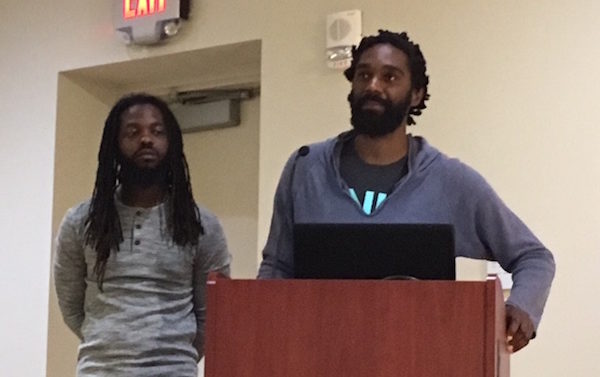 Kendrick Bullock (left) and his brother, Broderick Flanigan, discuss a discrimination complaint they filed against 9d’s Bar at a May 2017 news conference,

The East Clayton Street bar 9d’s will be closed today and Saturday while its alcohol license is suspended after agreeing to a consent order with the Athens-Clarke County attorney’s office on an April 2017 discrimination complaint.

Kendrick Bullock alleged that 9d’s denied him entry for a dress-code violation in April 2017 in spite of the bar not having a dress code publicly posted as required by a local anti-discrimination ordinance passed in 2016 in response to numerous complaints that student bars downtown were unfairly using dress codes to keep out black customers.

9d’s owner Mark Bell said the consent order was offered by the county attorney’s office. “Our feeling was they just wanted it to go away,” Bell said.

Bell challenged the anti-discrimination ordinance as unconstitutional in federal court, but the lawsuit was dismissed.

“AADM advocates continued to fight by bringing awareness to the ongoing issue of discrimination in downtown Athens, and through perseverance and community support justice has prevailed,” said Mokah Jasmine Johnson, who co-founded the Athens Anti-Discrimination Movement after widespread reports of discrimination downtown surfaced in 2015.

Bullock’s complaint was the first under the ordinance, and it’s also the first to be resolved.