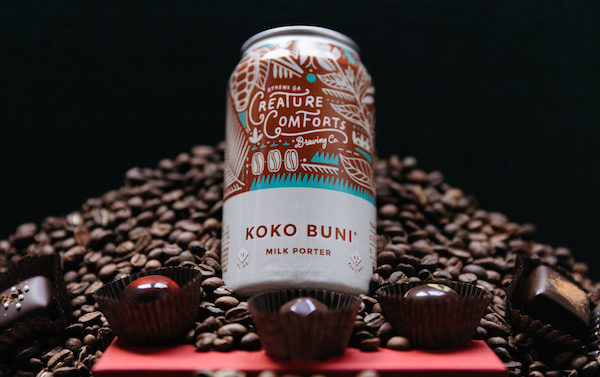 Koko Buni is back, and new version of Creature Comforts’ Tritonia gose will hit the streets next week.

Koko Buni, Creature Comforts’ winter seasonal, is a milk porter brewed with Ethiopean coffee beans from 1000 Faces, coconut and cocoa nibs from Athens’ Condor Chocolates and Illinois-based Ethereal Confections. The coffee beans themselves are also available as 1000 Faces’ Koko Buni Blend. It’s available on draft and in cans in Athens and Atlanta.

Creature Comforts will also release a version of Tritonia—based on the Berliner weisse Athena—with lemon and pineapple on Friday, Dec. 21. A previous version featured cucumber and lime.

Out on Newton Bridge Road, work has started on Terrapin’s new warehouse in the General Time development at the former Westclox watch factory across the street from its existing brewery. A groundbreaking ceremony was held Dec. 6. Eventually, the development will include apartments, retail space, restaurants and a 3,000-seat amphitheater.

Flagpole Premieres: Kenosha Kid, ’04 How Would It All Fit?’ Video