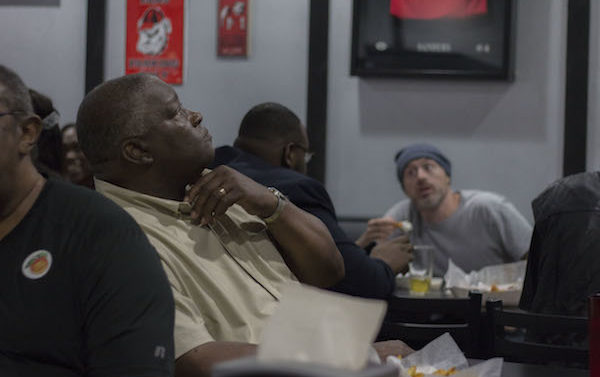 The first results in District 1 are in, and Patrict Davenport leads incumbent Sharyn Dickerson 164 votes to 134. But they’re from Winterville, which is probably a little more progressive than other parts of the eastern Clarke County district.

In District 9, Ovita Thornton has opened up a 155-vote lead over Tommy Valentine.

More votes in District 2 are in, and Mariah Parker’s lead over Taylor Pass has shrunk percentagewise but grown in raw number of votes, from 21 to 45.

10:15 p.m.: Tabitha Johnson-Green is maintaining her lead in the 10th Congressional District’s Democratic primary with 55 percent of the vote to Chalis Montgomery’s 23 percent and Richard Dien Winfield’s 21 percent. She is winning every county in the district except Clarke (Winfield, by six votes over Montgomery), Oconee (Montgomery) and Barrow (Montgomery’s home county).

While shocking here in Athens because she is a little-known latecomer to us, remember that Johnson-Green is an African American and from a different part of the district (around Sandersville or Washington County), so this kind of makes sense. But it looks like Winfield and Montgomery are neck-and-neck for second place going into a runoff—good news for TJG, considering the bad blood between those two.

Stick a fork in whoever those guys were who ran against Rep. Jody Hice on the Republican side.

10:03 p.m.: With all of the Oconee County vote in but only a quarter of Clarke’s, both judicial races look like they’ll be close—especially Regina Quick’s.

Quick leads challenger Lisa Lott 57 percent to 43 percent. Judge Eric Norris leads challenger Allison Mauldin 61 percent to 39 percent. Both incumbents won Oconee by about two to one. But Lott is getting 66 percent of the vote in Clarke County, so she will catch up as more results come in. Mauldin, though, is winning just 56 percent of the vote in Clarke.

Judicial races are nonpartisan, but this one has a partisan tint because Norris and Quick were both appointed by Gov. Nathan Deal, and Quick is a former Republican state representative. Lott, meanwhile, is a public defender and wife of former Democratic state Sen. Doug Haines, while Mauldin is married to Democratic district attorney Ken Mauldin. However, Mauldin has been criticized by some Democrats because she is a career prosecutor.

• Russell Edwards leads the District 7 race with 325 votes to Carl Blount’s 259 and Bill Overend’s 74. Edwards is just shy of avoiding a runoff so far.

In school board races:

Keep in mind that precinct lines don’t match up exactly with commission and school board districts.

9:36 p.m.: The first batch of results from Athens-Clarke County is in, and Kelly Girtz is leading Harry Sims in the mayor’s race 64 percent to 28 percent. Richie Knight has 8 percent.

About 2,700 votes have been counted, and six of 24 precincts are partially reporting. They are Clarke Central (3A), Lay Park (3B), Memorial Park (4B), Fleet Management (5D), Fire Station 4 (6B) and Fire Station 3 (7C). This is probably good news for Girtz, as those precincts include neighborhoods outside the Loop and with good-sized African American populations where Sims would have to do well to win.

9:10 p.m.: Incumbent Superior Court judges Eric Norris and Regina Quick lead challengers Allison Mauldin and Lisa Lott by two-to-one with about half of Oconee County precincts reporting, but none in Clarke County.

In the 10th Congressional District’s Democratic primary, Tabitha Johnson-Green surprisingly leads with 57 percent of the vote to Chalis Montgomery’s 23 percent and Richard Dien Winfield’s 20 percent. Montgomery was the first in the race and Winfield has received national attention for his guaranteed-jobs platform, while Johnson-Green was a late entrant who raised little money. But only 24 percent of precincts are reporting—including, again, none in Athens, where the bulk of Democratic voters reside and Winfield and Montgomery have campaigned heavily—so those results could easily change.

Incumbent Rep. Jody Hice is has 80 percent of the Republican vote; challengers Joe Hunt and Bradley Griffin are tied at 10 percent each.

Where Should I Watch Tonight’s Election Results?