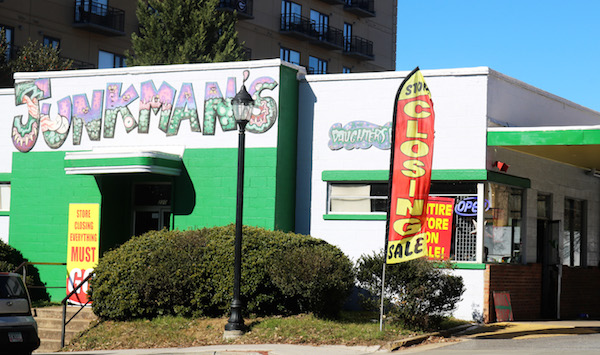 Lovers of funky tapestries and eclectic novelties will be saddened to hear Junkman’s Daughter’s Brother, located on West Broad Street, is officially closing as soon as the last of the merchandise sells.

However, it’s not a retirement or sudden urge to relocate that’s shutting down the shop—it’s that rent is going by 56 percent. Owner Mark Gavron said no one approached him with an opportunity to re-sign his lease. One day, he said, a man came in and casually asked if Gavron was moving locations, since he’d seen the building was available on Craigslist. Gavron said this was the first he had heard of the news.

“It’s OK, it just puts me a year ahead of my planned retirement,” he said.

Gavron expects the merchandise will probably sell by mid-February, and does not plan on reopening another permanent location. Depending on Gavron finding the right place, price and time, he said he hopes to open a sort of pop-up shop for about two months around Christmas time.

“It’s been a lot of fun for 31 years,” Gavron said regarding Junkman’s Daughter’s Brother. “It’s been a great time.”

Gavron, 63, opened Junkman’s Daughter’s Brother in 1986, basing it on his sister’s store, Junkman’s Daughter, in Atlanta’s Little Five Points neighborhood. The store’s East Clayton Street location closed in 2014, with Gavron planning to retire and do some traveling. But he always left open the possibility of re-opening, and found a new location in the former bus station next to the GameDay development in 2015.

Chick-Fil-A Is Opening in Downtown Athens

ACC Police: We Got the Natty Under Control