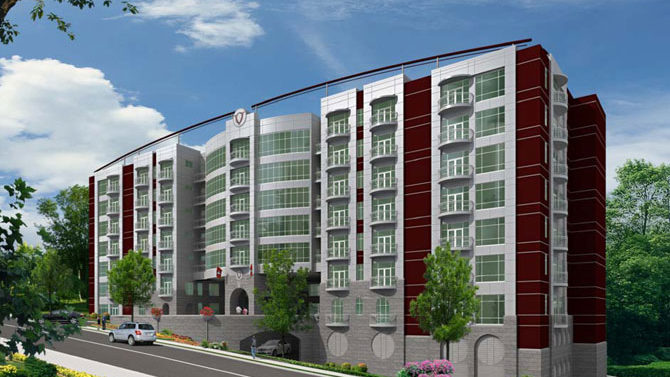 A rendering of the 155 Mitchell Street development.

The Athens-Clarke County Commission voted to approve a rezoning for a towering upscale condominium development near downtown Tuesday night despite concerns raised by citizens about the scale, design, price and environmental impact of the project.

The development, at 155 Mitchell Street behind the Steeplechase condominiums, will include 256 bedrooms, mostly in two-bedroom, two-bath units, on top of three stories of parking and one level of office space. Situated on a steeply sloping lot, it will measure seven stories on one side and 10 on the other, barely coming in under ACC’s 100-foot height limit when measured from the midpoint.

Several dozen speakers opposed the rezoning during the five-hour meeting, in addition to more than 100 who emailed comments in opposition to commissioners. They argued that the ACC government should be encouraging affordable housing downtown, rather than housing aimed at wealthy retirees, and raised concerns that the development would wind up as mostly empty gameday housing or student housing.

Activist group Athens for Everyone opposed the development as “a giveaway to those who already have enough” on behalf of its 1,075 members.

“We want to be a community that meets the needs of all of our residents,” including the 38 percent in poverty, A4E’s Adam Lassila said.

Another speaker, Irami Osei-Frimpong, called the idea that retirees would fill the development “amusing or naive, I don’t know which one.”

The project’s backers, though, said it will fill a unmet niche and balance out downtown’s heavily student population. Real estate agent Stephanie Leathers said she fields calls regularly from retirees who want to move to Athens, but she has little to show them that meets their needs.

“The property will be marketed to retirees who want to settle in Athens, GA,” said developer Carl Nichols.

The development will create 100 jobs and $700,000 in annual tax revenue, Nichols and partner Steven Hill of Gainesville said.

“With [$700,000], what more could this government do on the affordable housing issue?” said former Athens Housing Authority chairman Charlie Maddox.

Abigail West noted that the development will require piping a stream underground and questioned the effect on stormwater runoff, but Nichols said the developers will spend $300,000 cleaning up construction debris at the currently vacant lot.

“We really missed an opportunity to require some kind of sustainable development design” such as solar panels on new downtown developments, said business owner and District 7 commission candidate Russell Edwards.

Commissioner Melissa Link, who has been an outspoken opponent of the development, was joined by commissioners Jared Bailey and Kelly Girtz in voting against the rezoning.

“Everywhere I go, people talk about how much they hate these high-rise, boxy, bulky buildings,” Link said. “They absolutely hate them.”

The rezoning to commercial-downtown will allow the developers to build approximately six times more bedrooms on the 1.7 acre site than the former multifamily zoning.

“It’s basically a gift… of about $30 million to this developer,” Link said. “What are we getting in return?”

Girtz pushed to add an affordable housing component to the development that would allow moderate-income retirees, such as teachers, to buy units there. He said he spoke to the Athens Land Trust, which agreed to manage those affordable units for free, but the developers turned him down.

“This is something dozens of cities have done, and we need to be talking about here,” he said.

Girtz proposed sending the rezoning request back to the planning commission, but the idea did not draw any support from his colleagues.

Similarly, Commissioner Mike Hamby (who in the end voted for the rezoning) proposed earmarking 30 percent of tax revenue from downtown development for ACC’s affordable housing trust fund, but did not get any backing.

“Once and for all, we can quit talking about it and actually do something,” Hamby said.

Bailey’s concerns centered on infrastructure. He was the lone commissioner to vote to reduce downtown density in 2010, based on an engineering study that said downtown may not have enough water and sewer capacity to meet future growth.

Commissioners Diane Bell, Sharyn Dickerson and Andy Herod argued that dense development is appropriate for downtown. The 2000 comprehensive land use plan put it there for a reason—to curb suburban sprawl and efficiently provide services.

“Our community is growing,” Herod said. “People are coming here. We have to choices: We can grow upward, or we can grow outward.”

Dickerson and Mayor Nancy Denson also objected to what they characterized as the development’s critics demonizing wealthy retirees.

“We’re vilifying people who’ve done well and been successful by saying we don’t want them in our community,” Dickerson said.

The commercial-downtown zoning district is currently under a development moratorium, but Nichols said that won’t affect the Mitchell Street project because it won’t be ready to break ground until April, after the moratorium expires.