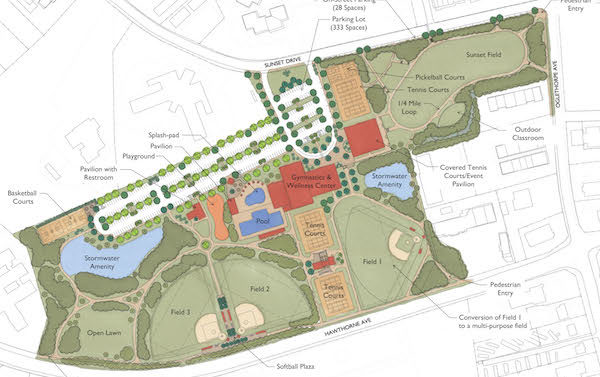 Bishop Park is one of Athens’ most popular recreational areas, but it hasn’t had a facelift in more than 40 years. “We’re surrounded by all-1974 infrastructure, and it’s bad. It needs repair,” Park Services Administrator Mel Cochran-Davis said at an open house for the Bishop Park master plan last week.

Location-wise, not much would change in the master plan, except the basketball courts would be moved from the center of the park to the far northern edge, making way for a stormwater pond. (Water drains there naturally, so Leisure Services couldn’t find anywhere else to put it, interim director Kent Kilpatrick said.) But many existing facilities would be replaced in phases with new, better and larger ones.

“This is our polished version—taking what’s working about Bishop Park, what people said they want, and making it better,” Cochran-Davis said.

The aging gymnasium and administrative offices would be replaced with a new 15,000-square-foot building.

The multi-use field along Sunset Drive, popular with soccer players, would remain, but a new quarter-mile walking path would be built around it, providing a shorter alternative to the longer jogging trail on the north side of the park.

The three baseball/softball/kickball fields would remain, too, and get new bleachers and dugout, along with the ability to retrofit them for football and soccer practices.

A new pool—the same size as the current one—would be installed, and a splash pad added.

The small existing playground would be replaced with one comparable in size to World of Wonder at Southeast Clarke Park.

The picnic pavilion next door would be replaced (and a restroom added), and commissioners would have the option to replace the covered tennis court with another pavilion.

Parking would be streamlined and enhanced, with 56 spaces added, including 28 on-street spaces along Sunset Drive.

Access, especially from Hawthorne Avenue, was a major issue at public hearings last year, and the master plan includes two upgraded pedestrian entranceways on Hawthorne, as well as one at the corner of Sunset and Oglethorpe Avenue. But more crosswalks on Hawthorne are not part of the plan. “With the speed of traffic and the sightlines, we couldn’t make it work,” Cochran-Davis said. (There are two traffic signals nearby, one at Oglethorpe and another near Bell’s.)

All of this comes with an estimated price tag of $25 million. Leisure Services officials said they’ll present the plan to the Mayor and Commission at a work session in July for an August vote, then ask for at least partial funding in the next round of SPLOST, which is likely to come up within the next year or two. The project is divided into four phases, so not all of it has to be done at once (nor could it, unless the county wanted to close the park entirely). Leisure Services is also seeking outside funding, such as money from local hospitals for wellness programs at the park, Cochran-Davis said.

Two more open houses are planned: One at the Athens Farmers Market at Bishop Park from 8 a.m.–noon Saturday, and one Monday from 6–8 p.m. in the conference room upstairs in the park’s gym.