Rep. Jody Hice Speaks to Rotarians, but No Plans for a Town Hall 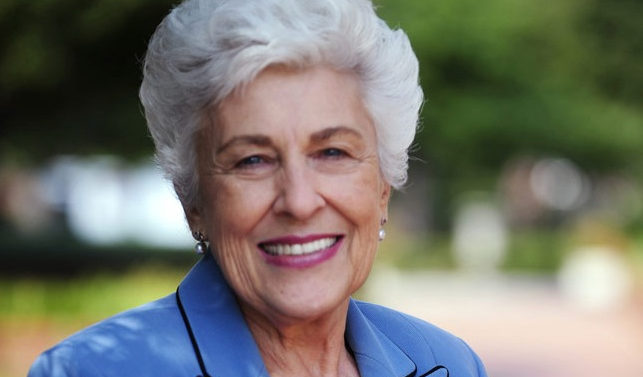 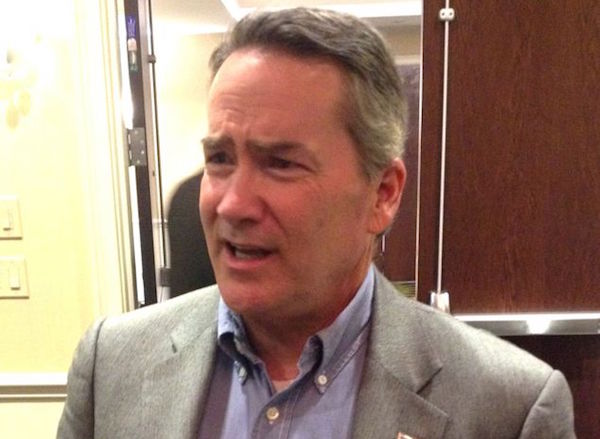 Republican U.S. Representative Jody Hice was in Athens on Monday. Unless you were eating fried chicken, vegetables and salad in the Holiday Inn with the genial Classic City Rotary Club, you probably didn’t see him. And you’re not going to—at least not in a town hall meeting.

Open to the public, a town hall meeting is what many congressmen traditionally hold in their districts during a recess in Washington to find out the concerns of their many constituents. Hice may have a “coffee with the congressman” in other parts of the district with a small number of invited guests, or he may meet with Athens Republicans, but that’s about it in Athens-Clarke County.

Rotary club meetings are open only to members and guests of members. Outside the Holiday Inn and at the Arch on Monday, a few people gathered to protest Hice’s reluctance to hold a town meeting in Athens. The signs read, “Am I scary?” and “Be brave host Athens town hall” and “Where is Jody Hice.” With Donald Trump receiving 28 percent of the vote in our community, a public reception for a Republican representative would likely yield more questions that what Hice fielded from the Rotary Club. 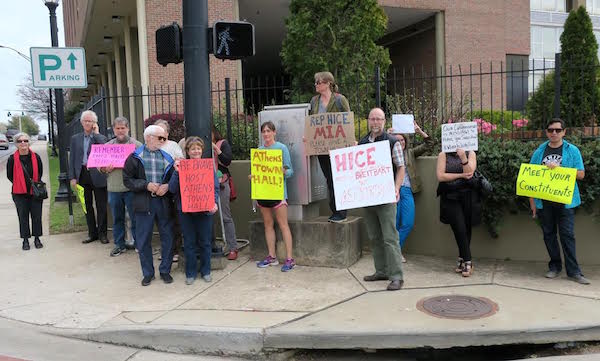 There were a few questions at the Monday meeting—one member asked about Do Not Call and another asked about Fair Tax. Hice said he’s working on tax reform, which includes cutting corporate taxes, reducing tax forms to the size of a postage stamp and making the IRS a service-oriented agency. He said there’s no constitutional authority for the Environmental Protection Agency and the federal Department of Education to exist, and he wants the country to return to a “constitutional form of government.” He also said “some of these agencies have budgets the size of small countries’.”

Rotary member Debbie Heisman told the congressman she disagrees with “99.99 percent of everything you are for,” and then asked about the possibility of Congress creating “an intelligent work visa program.” She said lawmakers are underestimating the impact that agriculture has on Georgia’s economy. It’s necessary for farmers to employ immigrants help harvest fruits and vegetables, something forgotten by those advocating deporting 11 million people.

Hice said he favors a guest worker program and believes there will be some such provision in immigration reform legislation.

When asked whether he supports an investigation into the ties between the Trump administration and Russia, he said, “There’s no question Russia’s not a friend of the United States” and that “they’ve been trying to hack us for years.” But “the investigation needs to go beyond this administration.”

There are so many needs and so many issues and he’s working so hard in Washington, Hice said on Monday, that he won’t be back in the district—other than his regular weekend trips home—until sometime in mid-April.

Athens For Everyone has scheduled a town hall meeting with Hice on Apr. 22 at 4 p.m. at the ACC Library, but neither his staff members nor he has confirmed he will participate. Since he was elected to Congress in 2014, Hice has yet to hold a public town hall meeting in Athens.

Classic City Rotary Club President Sarah Morang emphasized that the group is nonpartisan. “The club doesn’t take a position on political matters, so our invitation to speak is not an endorsement, but is an opportunity to hear him speak on matters important to our district and ask some questions,” she said.