Athens Is Getting a Civil Rights Committee, and No One Is Too Happy About It 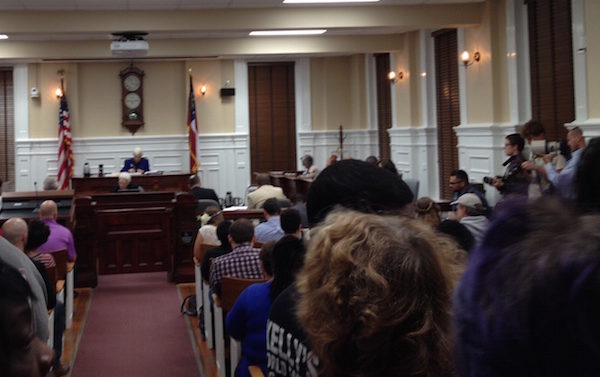 Every single Athens-Clarke County commissioner favors forming a local civil rights committee to deal with issues of discrimination in Athens, and so did almost every single one of the 100 people who packed City Hall for a commission vote on the topic Tuesday night. So why did most of them leave mad?

A bizarre 6-2 vote instructing county staff to bring forward a framework for the civil rights committee revealed rancor between not only the citizen activists pushing for the committee and the commissioners who approved it, but behind the rail as well.

About three dozen speakers came to the podium during an hour and a half of public comment, mostly to give commissioners information about civil rights committees in other cities.

A few strayed from the script, and they’ll come into play later.

Former mayoral candidate Charlie Maddox (who is African American) characterized the mostly young activists pushing for the civil rights committee as Johnny-come-latelies, and said they should be working through established organizations like the Athens Human Relations Council, which he said is down to six members. “There are many organizations that are already engaged,” he said. “I’m not trying to be disrespectful. We need the help.”

And Adam Lassila, a founding member of the two-year-old progressive group Athens for Everyone, chided commissioners for having to be forced into action. “Y’all very much proved yourself in need of some public nuisance in order to get anything done,” he said before storming out the door.

The vote itself was technically on approving a law banning bars from faking private events and selectively applying dress codes to keep out people of color.

To that measure, Commissioner Kelly Girtz and commissioners Andy Herod, Sharyn Dickerson, Allison Wright and Harry Sims added two similar but competing proposals paving the way for a civil rights committee. Commissioner Melissa Link proposed an amendment requiring the county manager and attorney to take public input before reporting back to the commission in June, and Commissioner Jerry NeSmith proposed another amendment specifying that the committee would be appointed by the Mayor and Commission and include members of certain minority groups. (Here’s more background.)

Girtz quickly moved to accept the Herod/Dickerson/Sims/Wright option, which was similarly worded to his own but also directed county staff to prepare a list of existing resources for people who believe they’ve been discriminated against. He accepted Link’s amendment and a simplified version of NeSmith’s.

Herod then made a substitute motion to approve his commission-defined option with no changes. That bothered NeSmith and Commissioner Jared Bailey, who wondered why Herod wouldn’t just get behind Girtz’s motion.

“I really wish there was a little more spirit of collaboration here,” Bailey said.

“We typically do not direct [staff] to meet with members of the public when they are working on things like this,” Herod said. “[It’s a] matter of process.”

Herod, along with Wright and Mayor Nancy Denson, echoed Maddox’s earlier comments. “Please look around to see what you can do with existing organizations that already exist in our community,” Denson said, to a smattering of boos. (Never mind that the Human Relations Council is not exactly a robust political group; for years, it’s done little but host an annual black-tie scholarship banquet. That’s great, but it’s not something that’s going to interest a bunch of twenty-something firebrands who can probably barely afford Taco Stand.)

Commissioner Mike Hamby mused about how state-level Republicans unilaterally redrew commission districts in 2012, resulting in less minority representation, and said the commission doesn’t do a good job of appointing minorities to advisory boards and authorities. Then he attacked Link for nominating two white members for a committee that will choose transportation projects to fund through a sales-tax referendum next year, even though she represents a 36 percent African-American district. (A clearly surprised Link tried to defend them as qualified and concerned about how transportation issues affect minorities, but Hamby continued to talk over her.)

Dickerson—echoing Herod—dismissed examples of civil rights committees in other communities, saying Athens needs a unique solution. “I’ve never known Athens in all my years here to do what everybody else is doing,” she said.

“This whole issue is about downtown Athens,” she said, drawing groans from a crowd that for almost a year has been trying to convince commissioners that discrimination is a citywide issue. “Come to the Eastside. We’re very diverse. We’ll accept you any day of the week.”

NeSmith announced that he couldn’t support Herod’s motion without Link’s amendment. There’s no harm in it, he said.  (The Occupy Athens veterans in the audience started snapping at this point, indicating their approval.)

Bailey summed up the debate: “It’s a shame that we’ve got people basically engaged in a pissing contest.”

In the end, Hamby and Commissioner Diane Bell joined Herod, Dickerson, Sims and Wright in voting for their commission-defined option with no amendments. Bailey and NeSmith voted “no,” and Girtz and Link abstained. (“I want to see the work proceed in the best fashion possible, and I’m glad it’s proceeding,” is all Girtz would say by way of explanation.)

“The ‘yes’ votes came from the enemies of justice!” another Athens for Everyone founder, Jesse Houle, shouted repeatedly from the back of the room.

Advocates for the civil rights committee pretty much got what they wanted, but they were unhappy nonetheless. “It’s not bad, but it would’ve been better with what Melissa recommended,” said Mokah Jasmine Johnson, co-founder of the Athens Anti-Discrimination Movement.

“What they’ve successfully done is lost the confidence of the community,” said another member, Greg Wagstaff.

Link’s public-comment amendment “would’ve been a nice acknowledgement,” AADM member Tommy Valentine said. “We built the bridge three-quarters of the way. They just had to build the other quarter. But what I heard was that people of color aren’t important.

“We’ve been given an impossible set of hoops to jump through,” he said. First, commissioners said the group didn’t include enough people of color. Then they were called unruly. Then commissioners said they didn’t know how a civil rights committee would work. When presented with examples, they said Athens needs a unique solution.

Back inside the commission chamber, as the meeting was wrapping up, Denson announced her appointments to the aforementioned T-SPLOST committee. “In light of very disruptive behavior tonight,” they didn’t include Houle—one of Link’s nominees. She invited Link to submit a new nominee. “Hopefully, it’ll be a minority, and if you need help finding an appointment, I can help you,” Denson said, twisting the knife a bit.

Dickerson, who represents rural eastern Clarke County, piled on, too. “I found two very highly involved individuals in my district who are not white,” she said.

Although the vast majority of public comments were respectful, Herod and Bell got defensive in their closing remarks.

“I will take exception to six of us being specifically called out for not caring about this,” Herod said. “I have a 30-year record of fighting for social justice,” including convincing his university in the United Kingdom to divest from apartheid-era South Africa.

“I’m not happy at all, the way we were dealt with, the six of us,” Bell said.

Link put the focus back on the heavily African American, gentrifying West Broad neighborhood she represents. “We have the opportunity to protect some of these neighborhoods, to implement some affordable housing, to tweak our zoning here and there,” she said. “It’s not that hard to do.”

Late last night, Houle sent an email to Denson apologizing, explaining that he recently suffered a personal tragedy and asking for his spot back on the T-SPLOST committee.

In spite of last night’s disappointment, Athens for Everyone issued a statement this morning calling the vote “a great victory.”

“Residents spoke out at the podium, in letters, emails, phone calls, research, and even in song”, said Athens for Everyone President Tim Denson. “Those voices were too loud to be ignored and the Mayor and Commission, some reluctantly, had to answer their call.”

The November 1 meeting was contentious and at times odd.

Steadfast support for an Athens Civil Rights Committee from Commissioners Kelly Girtz, Melissa Link, Jerry Nesmith, and Jared Bailey was shown in a Commission Defined Option created by Commissioner Girtz weeks in advance. Commissioner Link offered a slight revision more than a week in advance requiring “public input” be utilized in the process of creating a Civil Rights Committee. A third CDO was then dropped just 4 days before the meeting date by Commissioners Andy Herod, Harry Sims, Sharyn Dickerson, and Allison Wright that was similar to Commissioner Girtz CDO. Girtz, Link, Nesmith, and Bailey offered their support for the newly dropped CDO with the caveat that Commissioner Link’s addition be included. Commissioner Herod refused to support that compromise and offered his language alone. After great discussion on the importance and innocence of taking public comment, the Herod CDO passed 6-2 (NO: Bailey, Nesmith; Abstain: Girtz, link).

Athens for Everyone and the Athens Anti-Discrimination Movement look forward to working on ensuring that the Athens Civil Rights Committee see the light of day and is the success that it can, and should, be.

This post has been updated to correct an Andy Herod quote and attribute a quote to Adam Lassila, not Jesse Houle.