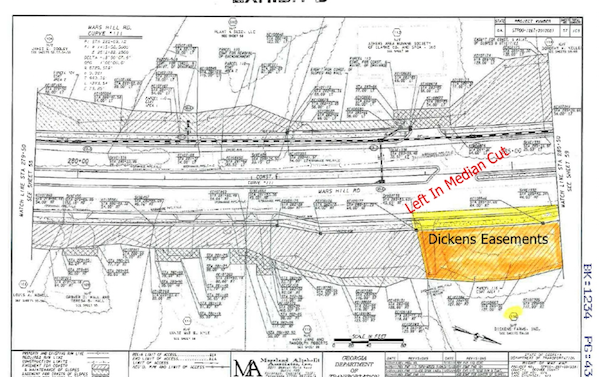 Doug Dickens, president of Dickens Farms Inc., told the Georgia Department of Transportation that it should assess his 102 acres on Mars Hill Road not as agricultural land, as it is zoned, but as the site of the large residential and commercial development he said he plans for the property.

The state ultimately accepted his argument, giving him a partial median cut that was not part of the original design and paying him $32,000 for 0.312 acres of permanent easement and 0.501 of construction easement.

That was 2.7 times the $11,800 recommended compensation for the acreage.

Dickens suggested to GDOT negotiator Matt A. Johnson during the process that he had the support of the county commissioners and particularly of BOC Chairman Melvin Davis, and nothing in the negotiation record indicates that Johnson doubted that assertion.

The board of commissioners has agreed to spend $5,000 to make the case to the state for that full median cut on top of the $5,000 already obligated for design work already completed for the full median cut.

Everything You Need to Know About Mike Pence