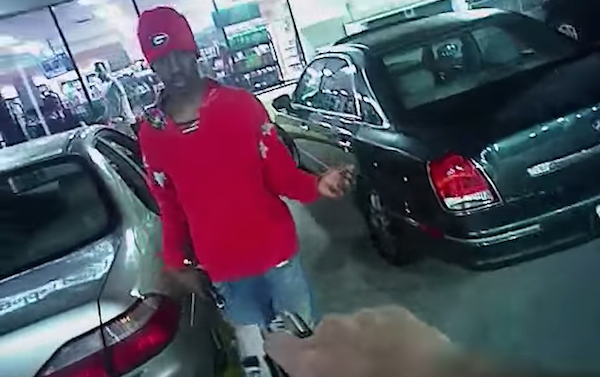 A video released by Athens-Clarke County police appears to show a suspect reaching for a gun before he was shot by an ACCPD officer at the Golden Pantry on Barnett Shoals Road early Saturday morning.

The video from Officer David Kelley’s body camera shows Kelley approaching a car in the gas-station parking lot. A young African American man—identified by police as Justin Tramell Scott, 22—is in the back seat and gets out. (Police said earlier that Kelley approached Scott and another man because he saw them pouring liquor into a cup.)

Kelley is questioning him with his gun drawn when Scott appears to make a move to draw a gun on his hip. Kelley fires, and Scott runs away. (Authorities said Saturday that Kelley fired twice, hitting Scott once in the face, and his injury was not life-threatening.)

Kelley chases him around the store, at one point getting close enough to fire his Taser. Scott falls down, then gets back and keeps running.

The chase continues down Barnett Shoals, where another officer pulls up in a police car and catches Scott.

“The officer was placed in a position where he had no other choice but to defend himself or face being shot and killed right there in the parking lot,” Freeman said.

The Georgia Bureau of Investigation is conducting an independent investigation of the shooting and will turn the results over to the Clarke County District Attorney’s office.