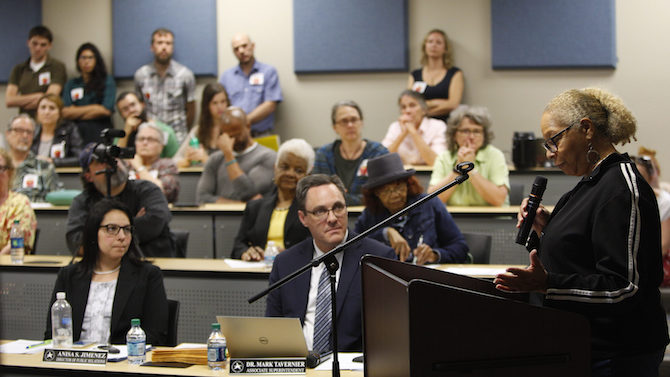 Two weeks ago, Ted Gilbert, associate superintendent at the Clarke County School District, gave a presentation on plans to renovate the long-vacant West Broad School into administrative offices. The plans presented confirmed what Flagpole had already reported—that they called for paving over a popular community garden on the property and moving the garden to a much smaller parcel that’s now a parking lot across Minor Street.

“We think this is a pretty good effort at this point to balance the two needs”—the garden and parking, Gilbert told school board members.

Not so much, many community members responded. About 20 people—just a small fraction of those who’ve chimed on social media and in conversation all over town—turned out to a subsequent school board meeting Apr. 21 to complain about the plans, including several residents of the neighborhood surrounding the garden. Those residents—some of them older African American women who attended the segregated school as children—told administrators and the board that they felt left out of the process.

“Communities know what’s best for them, and they have a right to be at the table in a meaningful way,” said Daniela Aiello, who works with a group fighting gentrification in the Hancock Corridor neighborhood.

This is a group of people that’s seen governments disinvest in their neighborhood for decades. As the school and its grounds sat empty, residents say it became a haven for crime. That changed when the Athens Land Trust, seeking a way around zoning laws that prohibited agriculture in residential areas, partnered with the school district to start the community garden and a farmers market on the property in 2013.

“It’s beloved in town even though it’s only been here a few years. It’d be a real shame to see it lost,” said Bertis Downs, an influential education activist who’s ordinarily a staunch supporter of Superintendent Philip Lanoue.

It’s been a fruitful partnership. CCSD is on the cutting edge of the farm-to-table movement. Students work in the garden, and food grown there is served in schools. Neighborhood residents grow food there and sell it at the market, and other farmers and small-business owners come in from outside the area, too, to sell their wares.

Not to knock the Athens Farmers Market at Bishop Park (personally, my family goes to both), but the West Broad Market Garden has a very different feel to it. “It’s one of the few places where I get to see diversity,” Chad Whitley said.

Johanna Gardner, who’s lived in the neighborhood for nine years, said the market garden has given it more of a sense of community. “It’s affordable and friendly,” she said. “No one is priced out, and everyone is welcome.”

Kathleen Falke was more direct: West Broad is not “all upper middle class white people who can afford to pay $4 for a bunch of kale or potatoes,” she wrote in a letter read by Lou Kregel.

Since the garden is so important to them, residents are suspicious of why CCSD would want to dig it up, especially when other alternatives may be available for the 89 spaces district officials say they need. Donna Thurman, a representative from nearby Hill Chapel Baptist Church, said the congregation already has an arrangement with the district for overflow special event parking and would be open to a similar agreement for central-office staffers.

Some have wondered if district employees are scared to walk through the neighborhood. “God forbid you might want to cloister yourself locked up in that space,” market vendor Willa Fambrough said. “I hope that’s not the case.”

Lanoue tried to reassure the 100-plus people there that the $6.2 million plan isn’t set in stone by any means. He outlined the reasons why the administration is moving: The headquarters on Mitchell Bridge was too large for a downsized central-office staff, too out of the way and too expensive to maintain, and he wanted to be “closer to the city, where we should be.”

CCSD will appoint a stakeholders’ group at the appropriate time, he said, but the district hasn’t even hired an architect yet—the plan that’s been circulated is merely one proposal by one firm, and the board hasn’t made any decisions. “We haven’t moved at all in our process,” he said.

In spite of Lanoue’s efforts, this is another public-relations disaster for CCSD. Eastsiders are still raw about the handling of the alleged sexual assault at Cedar Shoals High School, and now westsiders have a reason to be ticked off, too. Board members, however, literally gave Lanoue a vote of confidence—they renewed his contract until 2019 at the meeting, too.

More School Stuff: Another speaker at the meeting, Tommie Farmer of the Clarke County NAACP, called for an independent investigation into CCSD’s handling of the aforementioned sexual assault at Cedar Shoals, where Tony Price, currently on administrative leave, won’t be returning as principal, district spokeswoman Anisa Sullivan Jimenez confirmed last week. The board also tentatively approved its $137 million budget, which includes employee raises, 16 new teaching positions and additional security. Public hearings will be held at 5:30 p.m. May 11 at Alps Road Elementary, May 18 at Gaines Elementary and May 26 at H.T. Edwards, and the board will vote to finalize the budget June 2.

On the Streets: Athens-Clarke County Commissioner Melissa Link will propose her own option for bike lanes on Chase Street at the commission’s May 3 voting meeting, she said at the Apr. 19 agenda-setting meeting. The Transportation and Public Works Department’s plan calls for a new crosswalk at Chase Street Elementary and bike lanes roughly from Boulevard to Newton Bridge Road. But the Chase PTO wants the crosswalk moved to a different location closer to Dubose Avenue, and several Chase residents who live between Boulevard and Rowe Road told commissioners they oppose eliminating the center turn lane there to make room for bike lanes because turning into their driveways would become more dangerous. Link told Flagpole she plans to meet with stakeholders and transportation officials to find a compromise.

Closing the block of Newton Street between Meigs Street and Prince Avenue for an outdoor cafe is a no-go, at least for now, because the Bottleworks’ owners (and some tenants) oppose it, and commissioners want to see how Parkside Partners plans to develop the Bottleworks parking lot into senior housing. “At some time in the future, we can reconsider it, but at this time, this is not something that should divide this commission,” said Commissioner Mike Hamby, a proponent of the idea.

Commissioners generally praised a $575 million deal for Atlanta-based Piedmont Healthcare to purchase Athens Regional, which will require commission approval next month, and signaled that they’ll likely approve the 100 Prince mixed-use development at St. Joseph Catholic Church, redevelopment of the Eastside Kroger and a Kroger gas station on Baxter Street.

But they raised concerns about a $240 million, 20-year water and sewer plan because it includes $20 million to study and buy land for a potential future reservoir, questioning the need for it when residents continue to conserve and growth projects are often too optimistic. Manager Blaine Williams said Athens—which shares a reservoir with three other counties but ordinarily takes drinking water from rivers—could need its own reservoir during a future drought, but it’s far from a done deal. “There’s lots of discussion to come,” he said.

Human Rights: The 38th annual Human Rights Festival is taking place Apr. 30–May 1 in College Square (see the Calendar and athenshumanrightsfest.org for more), and the schedule is chock full of political speakers on topics ranging from immigrant rights to ethical eating, as well as bands and other entertainment. On May Day, Sunday, Athens for Everyone has organized a workers’ rights march starting at 1 p.m. Marchers are pushing for protections for LGBTQA workers, a higher minimum wage and better conditions for farm workers.

Athens Power Rankings for the Week of Apr. 25