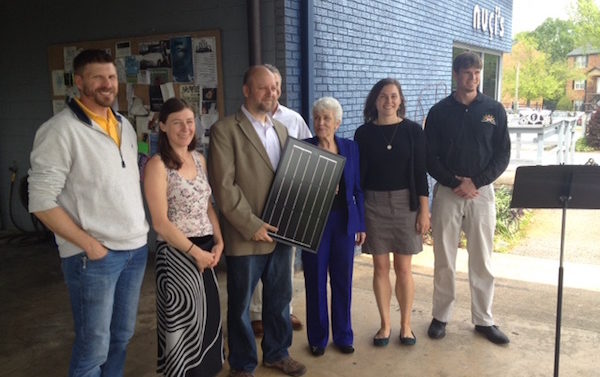 The local nonprofit Nuçi’s Space is getting rooftop solar panels thanks to Solarize Athens, a program that offers local residents and businesses bulk discounts on solar-panel installation.

Solarize Athens and the environmental nonprofit Environment Georgia announced an $11,000 grant to Nuçi’s Space this afternoon to help pay for the $20,000 panels. Nuçi’s Space won the grant from among four nonprofit applicants.

“Solar made the most sense for Nuçi’s Space and would have the biggest impact on their energy bills,” said Colleen McLoughlin, solar campaign organizer for Environment Georgia.

Nuçi’s Space is matching the grant with a $9,000 contribution of its own, “which, coincidentally, is what we spend on our power every year,” Executive Director Bob Sleppy said. The organization is raising funds to match the grant. (You can donate here and list “Solarize Athens” in the special instructions box.)

Energy savings from the solar panels will allow Nuçi’s Space—which focuses on musicians’ mental health—to subsidize 150 additional appointments once the panels pay for themselves in “a couple of years,” Sleppy said.

The panels will be installed in two or three months, according to Montana Busch of Alternative Energy Southeast, the company that has contracted with Solarize Athens. So far, 33 contracts have been signed with AES and 10 installation projects completed through Solarize Athens, McLoughlin said. The program ends Apr. 30.

Mayor Nancy Denson, also in attendance, said she supports both the arts and alternative energy, noting that the Athens-Clarke County Commission recently passed a resolution in support of renewable energy; however, Denson said she said she will not be including the $175,000 county staff estimate it would cost to start working toward a goal of renewables making up 20 percent of ACC’s energy consumption by 2040 in her upcoming budget because costs are still too high.

That will change soon, McLoughlin said. “We could do way better than that by 2040,” she said.