Jeb Bush, in Athens, Calls for a Kinder, Gentler GOP 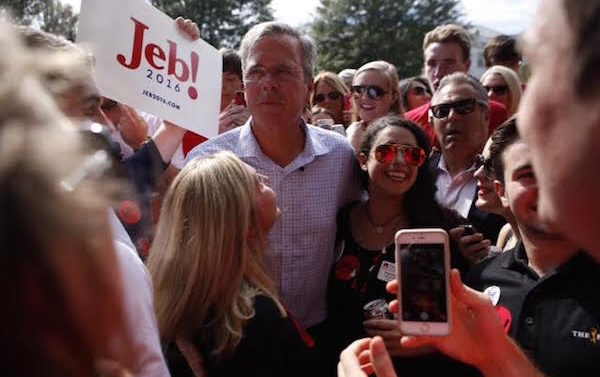 For a guy Donald Trump famously derided as “low energy,” Jeb Bush proved he has stamina while campaigning in Athens today.

Bush—the former Florida governor and latest in a political dynasty to seek the presidency—walked from a fundraiser at the Classic Center to the UGA College Republicans’ tailgate at Herty Field, where hundreds of fans and gawkers mobbed him. He shook hands and posed for photos in 90 degree heat—“I really like taking selfies,” he joked, rolling his eyes—for half an hour before giving a brief stump speech.

“It hasn’t been a budget passed in six years,” he said. “A Democrat can’t talk to a Republican, and a Republican can’t talk to a Democrat. And this gap that exists is making it harder for us to fix a few big complex things that are holding back particularly the next generation.

Though he didn’t use the term, he also talked about a big-tent GOP in a way that was reminiscent of his brother’s “compassionate conservatism.” Republicans can’t continue to ignore or demonize people who are living paycheck to paycheck, or worried about paying for health care or their children’s education, he said.

“I believe a Republican, a conservative can win if we campaign with our arms wide open, if we campaign everywhere, in every nook and cranny of this country, giving people hope again,” Bush said. “… I believe we do this not by tearing people apart, not by telling people ‘You’re not worthy,’ not by scolding people, not by saying, ’The end is near.’”

Bush was introduced by Lt. Gov. Casey Cagle, who called him “a great reformer in Florida.”

At one point, Bush referenced the “SEC primary” organized by Georgia Secretary of State Brian Kemp, in which several Southern states will hold their presidential primaries March 1. Georgia has traditionally been of little importance, but the SEC primary also drew presidential candidates Chris Christie, Marco Rubio and Ted Cruz to Athens in June.

And, in case you were wondering, Bush wore a neutral-colored shirt, and never gave away a preference for the Bulldogs or Gamecocks.