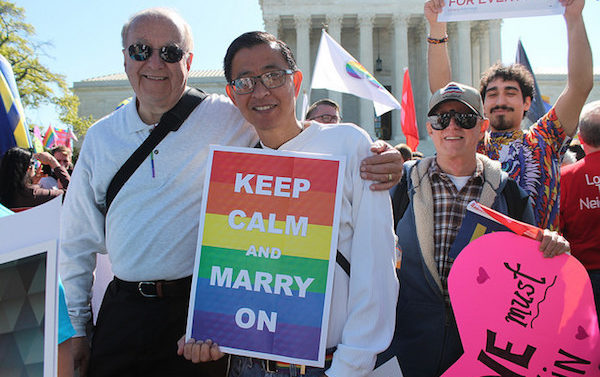 This morning, the Supreme Court released a ruling legalizing same-sex marriage across the U.S., including in Georgia. Flagpole is gathering reactions from local experts, politicians and the LGBT community. We’ll update this post as those reactions come in.

UGA Law Professor Hillel Levin: “In the end, advocates for marriage equality won on all the big questions in the case. There will be much celebration among advocates of same-sex marriage in Athens, Atlanta, and across the country. The University of Georgia will quickly amend its policies and extend benefits to married same-sex couples, whether they have already married elsewhere or now get married in Georgia.

“There is little surprising or unexpected in this decision. The outcome, the vote tally, the author of the majority opinion, the majority’s reasoning, and the spirited dissents are all in keeping with what many predicted.

“The decision is sure to revive and intensify debates concerning discrimination on the basis of sexual orientation, sexual identity, and marital status and religious freedom.”

Gov. Nathan Deal: “While I believe that this issue should be decided by the states and by legislatures, not the federal judiciary, I also believe in the rule of law. The state of Georgia is subject to the laws of the United States, and we will follow them.”

U.S. Rep. Doug Collins (R-Gainesville): “I am disappointed that the court has overstepped its boundaries once again. Many states have already voted to keep the definition of marriage to one man and one woman, and the court’s decision is a gross infringement on American democracy. The court should not have circumvented the will of the people, but as we saw with the King V. Burwell decision yesterday, they are more interested in legislating from the bench than letting the will of the people determine what our laws are going to be. Because this decision has robbed the American people of their freedom of choice, I strongly support a constitutional amendment defining marriage between one man and one woman.”

Janet Frick, UGA professor and advocate for domestic partner benefits: “For years, University Council has been trying to secure equal benefits for all families. It seems to me that this ruling removes any hurdle for that. I called Human Resources to ask what the game plan is going to be. It’s my belief that this will require action on the part of the Board of Regents. They are the group that makes the decision on what benefit options are available, which requires a marriage license that the State of Georgia recognizes. Now that this is no longer a hurdle, there should be no obstacle to allowing all legally married couples to have access to health insurance.

“The way employee benefits work, if you have a change of status—when you get married or have kids, for example — you have a time window to declare a change of status and have them added to health insurance. You can immediately make that change. You don’t have to wait for the following open enrollment period. Marriage licenses are already being issued today in Georgia, so domestic partner benefits are a moot point.”
U.S. Rep. Jody Hice (R-Loganville): “For the second day in a row I find myself extremely disappointed in the Supreme Court’s ruling. Unfortunately the Court took it upon itself, in another round of judicial activism, to dictate law that should have been left up to the voters and Representatives of individual states rather than the Supreme Court. I believe we are all God’s children, but according to my faith I believe in traditional marriage between one man and one woman, and I regret that the Court did not respect the legislative process that respected the beliefs of so many.

“I am incredibly disheartened that the majority of what should be the nation’s celebrated and definitive legal minds, apparently have lost their ability to reason logically or soundly. In choosing not to uphold traditional marriage, these Justices have chosen to ignore the duty of their appointed office to the detriment of the American people and society as a whole. For millennia, marriage has been rightly defined as occurring between one man and one woman. The idea that five ‘legal scholars’ have decided to overturn every traditional understanding of one holy institution, shows that the Court is now engaging in judicial activism rather than upholding the deliberative and prestigious positions to which they were appointed. The Supreme Court should hold the Constitution as the bedrock of American law. Since marriage is not defined in the Constitution, it should be left to the states to decide, as Georgia did in 2004, in accordance with the 10th Amendment.

“However, in anticipation of this catastrophic decision, I signed on to H.J. Res. 36 in February, along with many of my colleagues, which calls for marriage to be defined as taking place between one man and one woman. Now as a nation, our only remaining recourse is to seek further clarification through the true legislative branch of Government, which is Congress, and not the Courts. I will continue to stand on my principles of faith, rather than willy nilly judicial activism, which is both inherently wrong and abhorrent.”

DeeDee Kane, chairwoman of UGA GLOBES: “From a GLOBES perspective, this is in line with what we have always felt is right and true and should happen. We’re waiting to hear from the Board of Regents, but that (change to employee benefits) should follow. What I’m seeing on the GLOBES listserv is a lot of celebration. People are really happy and celebrating in a more vocal way than the list usually does.

“From a personal standpoint, I’m from Massachusetts and was in Massachusetts in 2004 when same-sex ruling was made. I was sitting at my desk in Cambridge and remember starting to cry at my desk, even though I didn’t have the intention at that time of getting married. It was a turning point and a signal of parity and equity that I think is important. It was very strange to me to move to Georgia and lose rights and privileges that I felt were mine. This brings Georgia and other states forward.

“Driving back from the airport today, I’ve heard reactions on the radio from people who feel their rights are being taken away or need protection. For people who are struggling with this, this isn’t about taking rights away. It’s about sharing and opening up opportunities for more people to be considered equal—across the whole country, not just one state.”

Charlie Sutlive, Board of Regents spokesman: “The Supreme Court has ruled, and the Board of Regents will ensure the University System and its 30 institutions will comply fully with the ruling.  We are reviewing our policies and benefits to identify what steps are necessary to ensure we are in compliance.”

Meet the First Same-Sex Couple to Get Married in Athens