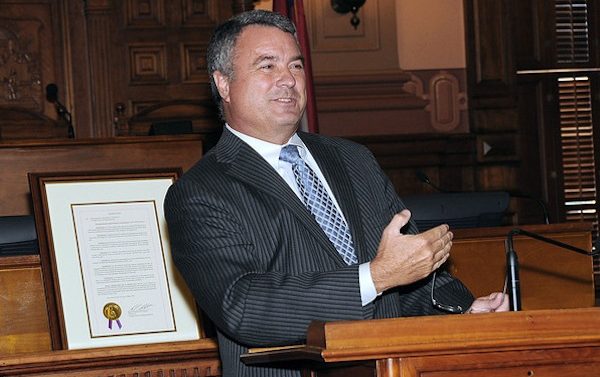 State Rep. Earl Erhart (R-Powder Springs) wants to hold hearings on how colleges and universities handle sexual assaults—but not for the reason you might think.

Erhart—chairman of the House subcommittee that handles higher education funding—is not worried about sexual assault survivors seeking justice, but about the rights of the accused.

“If somebody commits a crime, that’s the purview of trained professional jurists, district attorneys (and) law enforcement. The universities absolutely don’t need to be in that business, so I want to make sure that they’re not,” Ehrhart said. “They don’t need a secondary system of justice on university campuses. That’s the issue.”

He said even if a person is accused of a heinous crime, they should still be considered “innocent until proven guilty” and be granted their right to due process.

Colleges and universities are required to deal with sexual assault reports under Title IX, the federal law that mandates gender equity in higher education. In any university disciplinary hearing—be it for plagiarism, sexual assault or any other violation of the student code of conduct—the standard of proof is “preponderance of evidence,” meaning it is more likely that it occurred than it did not. Penalties are not criminal, but rather academic in nature: writing an essay, for example, or suspension or expulsion.

Whether or not Erhart (who is not a lawyer) understands the difference between a criminal and civil proceeding or federal and state law, neither prosecutors nor student judicial panels do a very good job of punishing students who sexually assault their classmates.

Flagpole has been looking closely at this issue for more than a year. Since the beginning of 2013, not a single person has been arrested for committing any of the more 100 sexual assaults that have been reported on and around the University of Georgia campus during that time.

Granted, prosecuting sexual assaults is challenging. Physical evidence is often long gone by the time survivors go to the authorities. Frequently, there are no eyewitnesses. Alcohol is usually involved, which can cloud everyone’s judgement, communication skills and memories. But let me repeat that no one has been charged with a sexual assault on the UGA campus in more than two years.

Survivors don’t fare much better in the student judicial process. Fifteen UGA investigations in 2013 and 2014 resulted in two students being suspended and one expelled. (Every other public college and university in Georgia has a higher rate of finding violations than UGA, according to the AJC.)

While it would be unjust for someone falsely accused to have their academic career derailed, that is a rarity. Experts believe that only a very small percentage of sexual assault allegations are false. Yet 97 percent of sexual assault reports at UGA go unpunished. Perhaps Erhart should look into why so many survivors see their rapists get away with it.