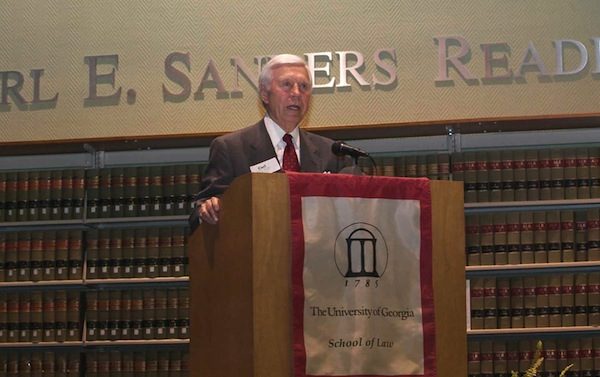 Carl Sanders, Georgia’s governor from 1963–1967, died Sunday at the age of 89. The University of Georgia issued a news release highlighting the Double Dawg’s impact on UGA.

Known as “Georgia’s Education Governor,” Sanders oversaw the investment of more than $2 billion in educational and training programs, including more than $552 million spent on the state’s public colleges and universities. Expenditures on buildings in the University System of Georgia topped $176.5 million-more than had been spent in the previous 31 years-and salaries for the system rose by 32.5 percent. An educational television network was created, vocational-technical education was expanded statewide and the state’s junior college system was enlarged. UGA received more than $40 million in construction funds while Sanders was governor, resulting in the start or completion of a dozen buildings, and the university’s faculty doubled in size.

A staunch supporter of UGA’s School of Law, Sanders was instrumental in providing state funding for an expansion of the law school building that included a new building for the law library. He also secured $1 million in state funds to buy books for the library. After leaving office, he made significant personal gifts to the law school, including $1 million in 2002 to establish an endowed professorship in the school. The reading room in the law library was named in his honor.

Atlanta construction tycoon Herman J. Russell, who built one of the largest black-owned businesses in the country, also passed away over the weekend. Among Russell’s many projects, his company manages Bethel Midtown Village.